There was a nice view over the Morrow Point Reservoir to the San Juan Mountains from the trailhead at Hermits Rest Overlook. Uncompahgre Peak, Wetterhorn Peak and Courthouse Mountain were just some of the peaks visible on the horizon. 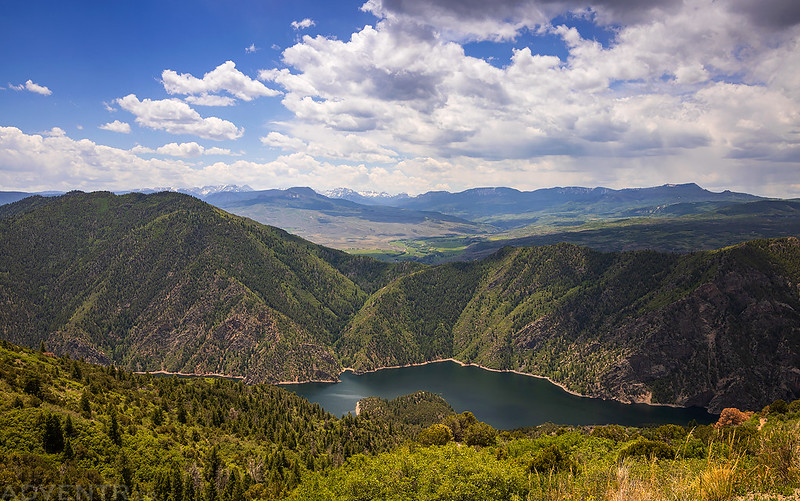 During the days leading up to the weekend, the weather forecast for the area was not looking favorable with a 50% chance of thunderstorms. On Friday evening we decided we would give it a go anyways and hoped that the storms in the area would mostly miss us. Since we weren’t heading up into the high country I wasn’t quite as worried about the weather on this trip. Since the hike to the reservoir was short and almost all downhill, we left home later on Saturday morning and arrived at the trailhead shortly after noon before we started hiking down into the canyon. When we reached the camping area at the bottom of the trail we found one group of four already camped there that had spread out and taken up most of the available campsites, which were all pretty close together. We set up our tent at the site that was furthest away from them and then spent the rest of the evening relaxing along the shore of the reservoir. Although there were storms all around us as we hiked down the trail, we only had to take shelter in our tent once as a short-lived storm passed over the area later in the evening which produced some rain, wind, lightning, thunder and even a double rainbow!

It was looking a little stormy out as we started hiking down the Hermits Rest Trail. 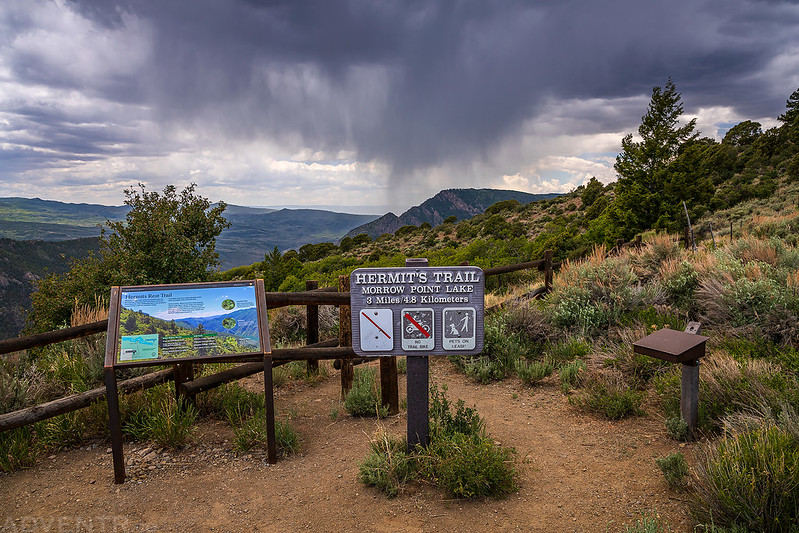 Diane hikes ahead of me under a mostly cloudy sky as we started our descent from the edge of Black Mesa into the depths of the Black Canyon of the Gunnison. Our very first backpacking trip together was down into the Black Canyon, so it was nice to return to a different part of the canyon. 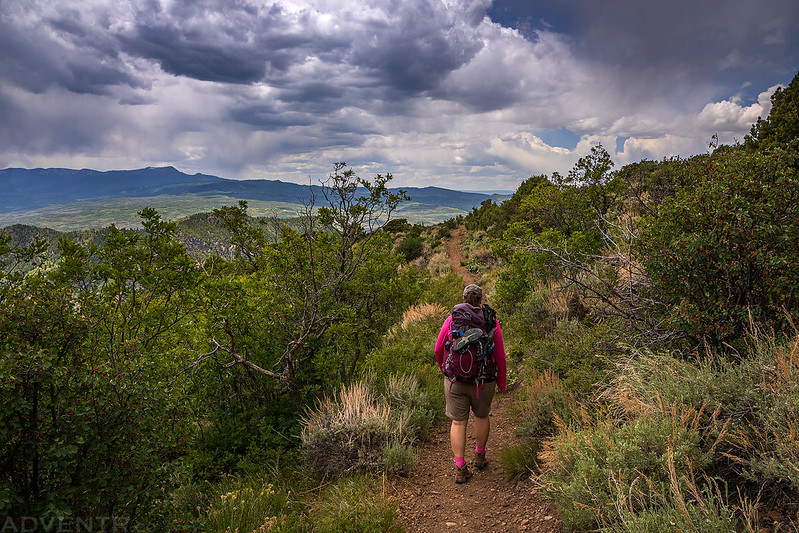 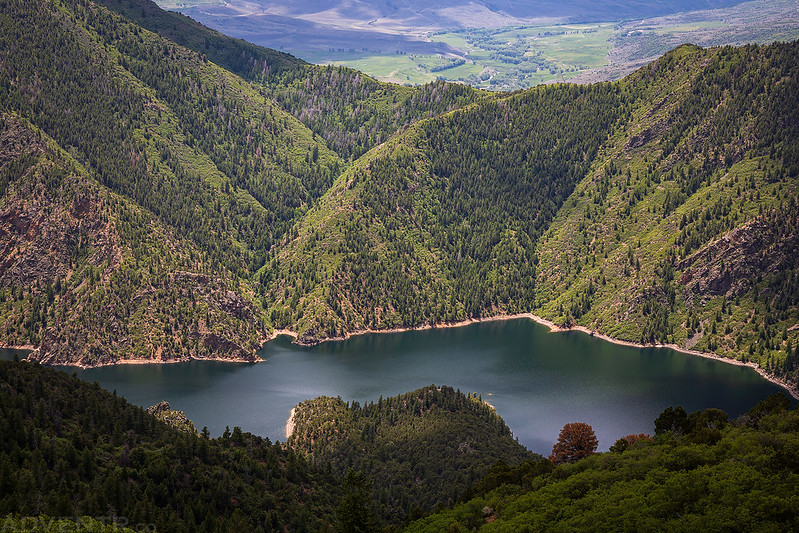 Hiking down the well-constructed switchbacks of the trail which made the hike pretty easy, even with all the elevation loss. 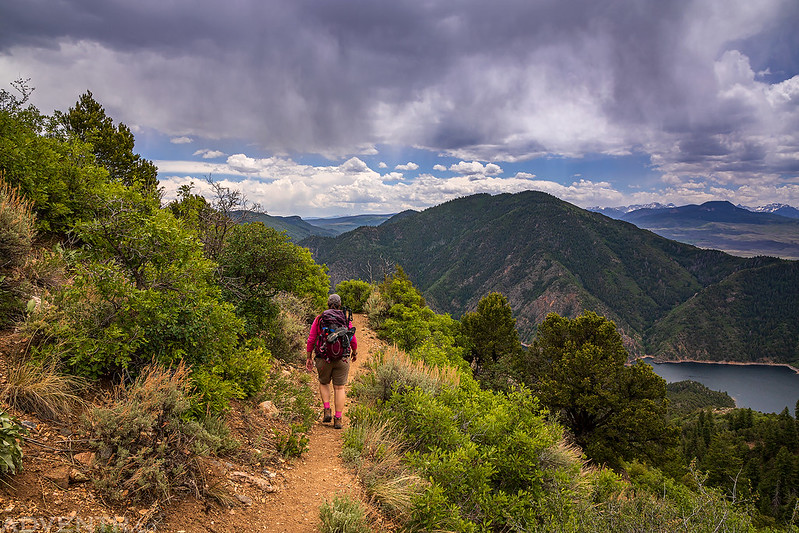 After descending about 1,800 feet we reached the shore of the Morrow Point Reservoir. The water was very cold, but it felt nice on this warm day. 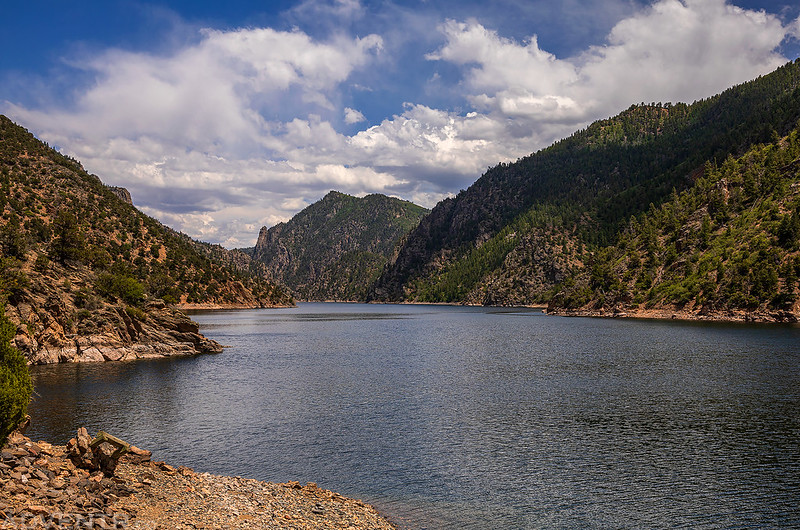 We walked along and explored the rocky shore near our campsite and cooled off in the water. 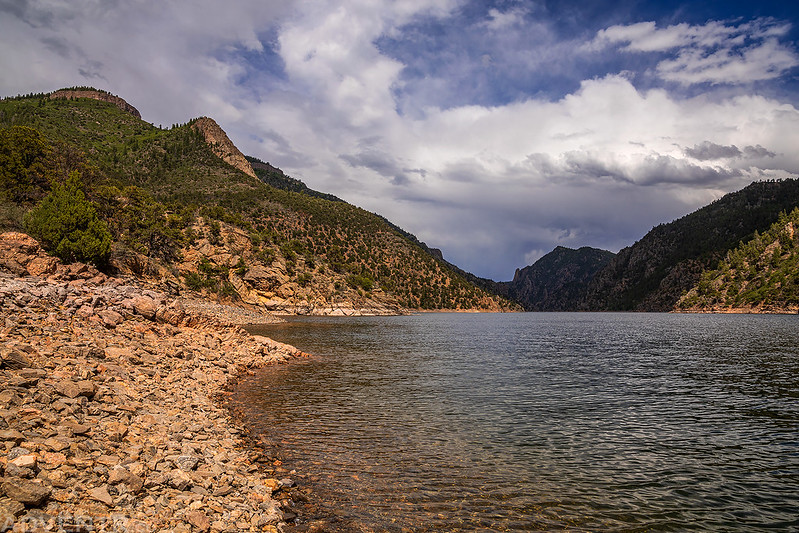 After waiting out a storm in our tent for a little bit I saw that the sun was coming out again and rushed outside to see if there was a rainbow. There was! 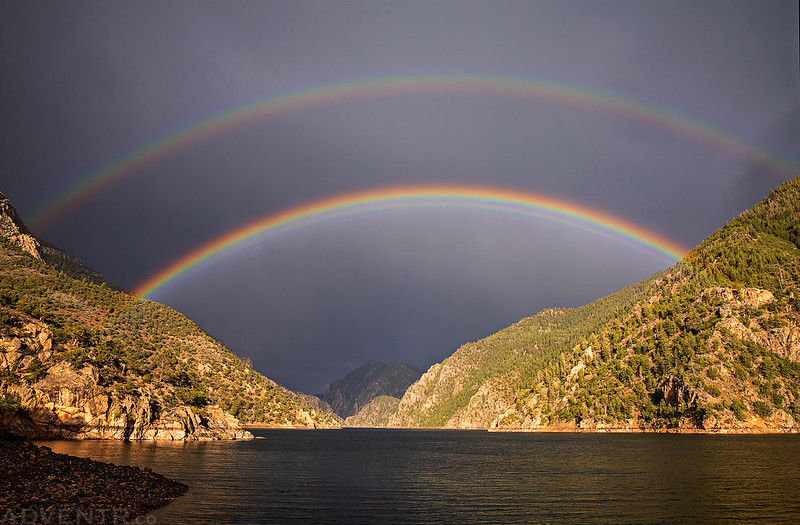 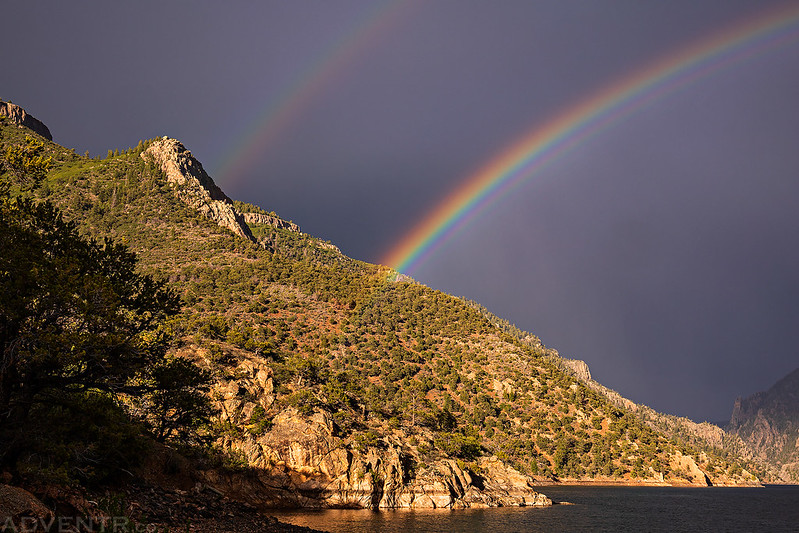 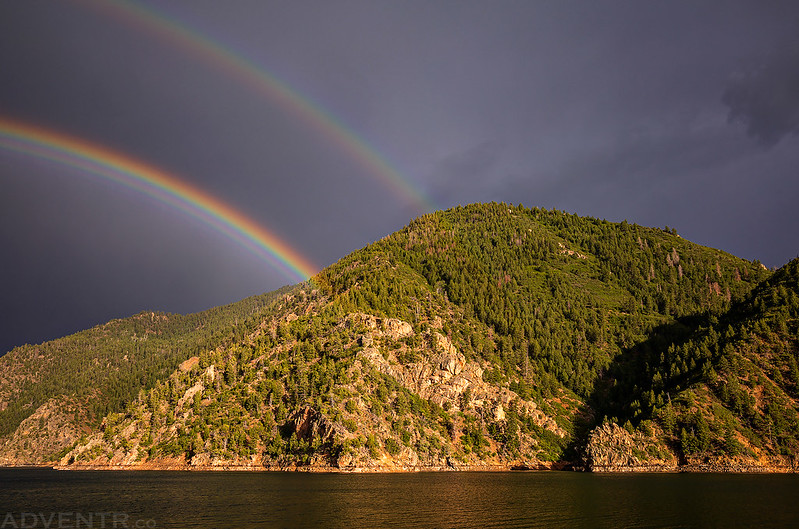 Once the rainbow disappeared there were still dark clouds in the sky and nice spotlighting on the surrounding landscape. 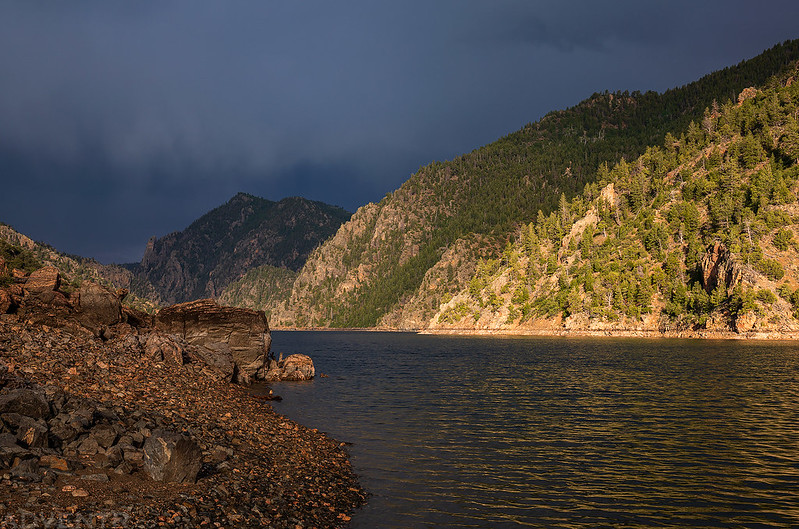 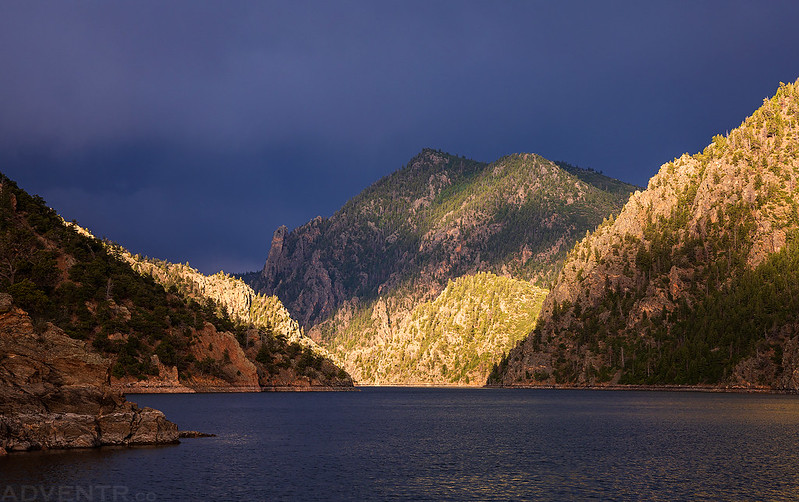 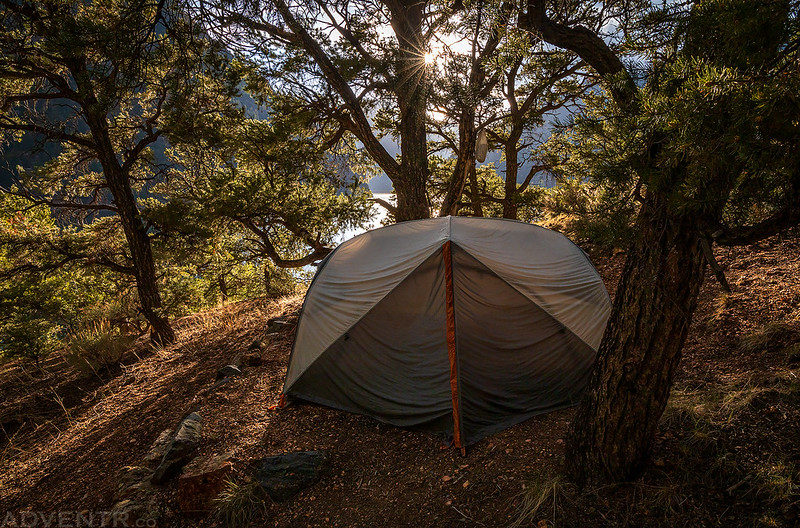 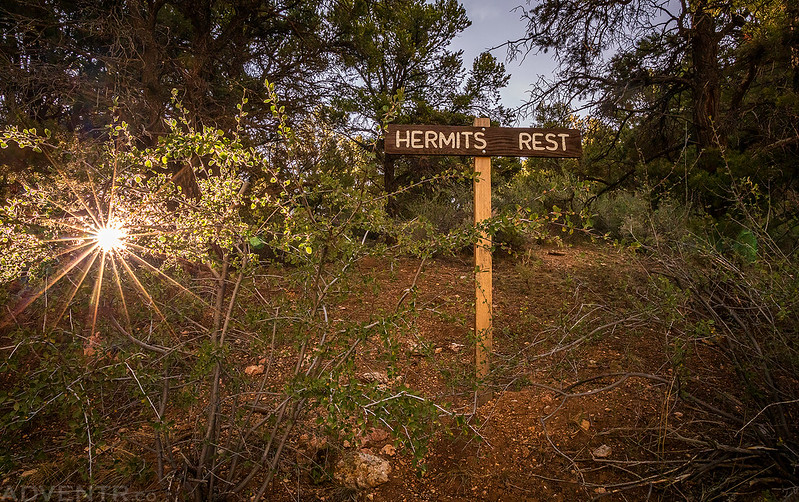 The sky was still dark as sunset approached, but there would be no nice sunset colors tonight as the sun dipped below clouds on the horizon. 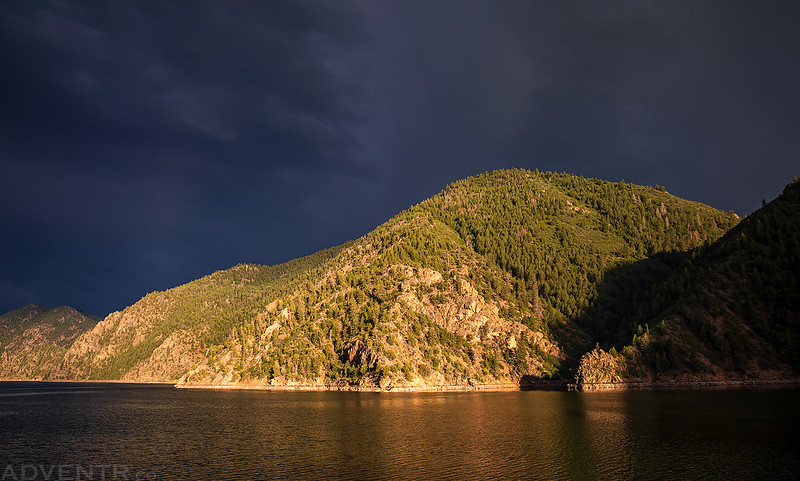 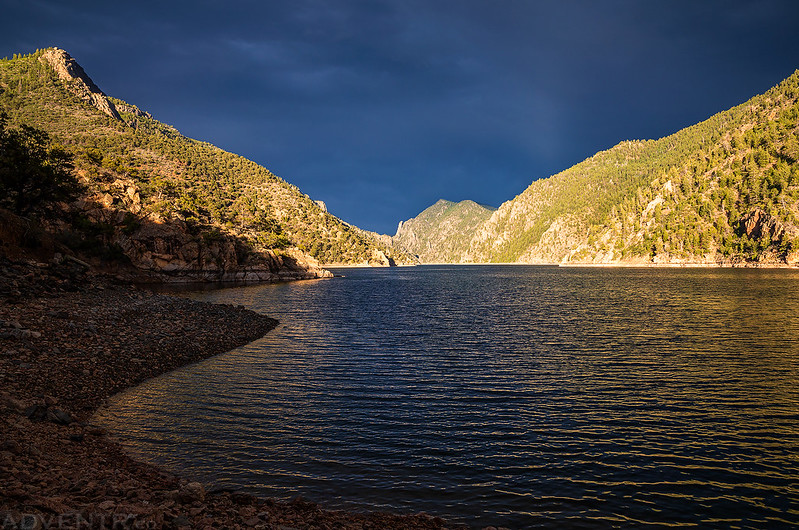 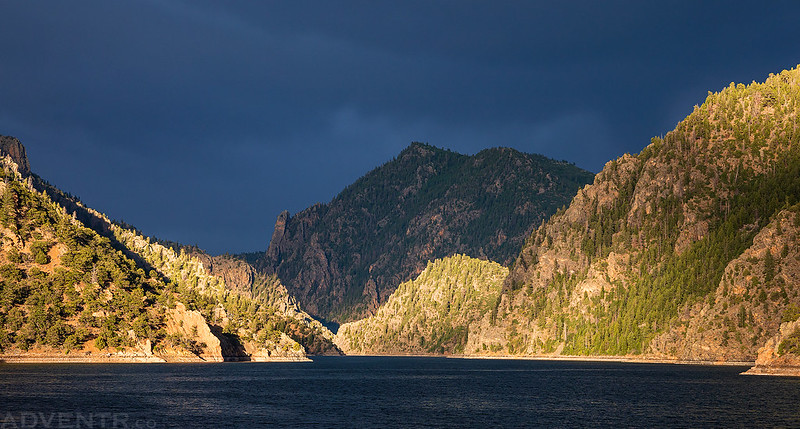 This was the last light in the sky before the sun completely disappeared for the night. 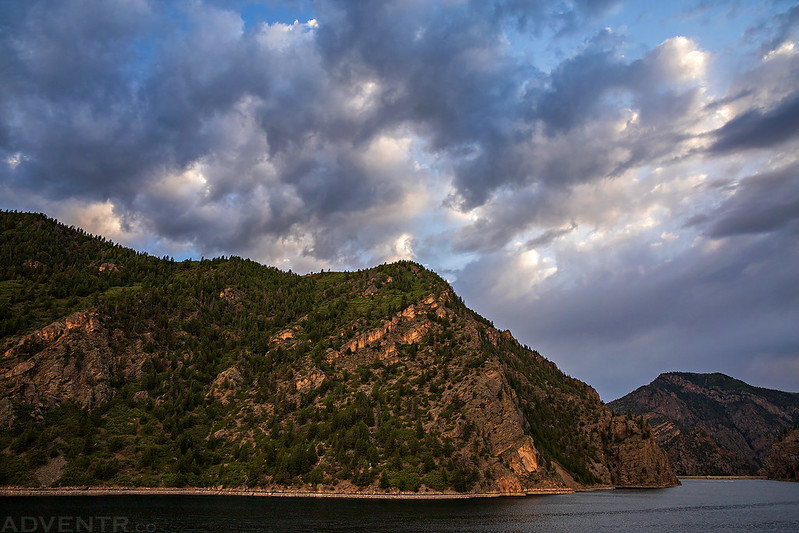 Once I realized there wasn’t going to be a nice sunset this evening we headed back to the tent and went to bed early. The temperature overnight was nice and comfortable, but the wind was very strong and loud all night. The good thing was that our campsite was well-protected and the wind was not hitting our tent at all, but it was very loudly blowing through the trees so I ended up not sleeping very well.

On Sunday morning we woke up shortly before sunrise and packed up camp so we could hike out early before the temperature warmed up. Although it was cool out for our climb back up, it was very humid out which made things a little uncomfortable. As soon as we climbed high enough to see the San Juan Mountains again, we noticed there was a lot of smoke in the air in that direction, which most likely was coming from the Mangum Fire which recently started on the Kaibab Plateau in Arizona.

A morning view from above our campsite looking over the Morrow Point Dam. 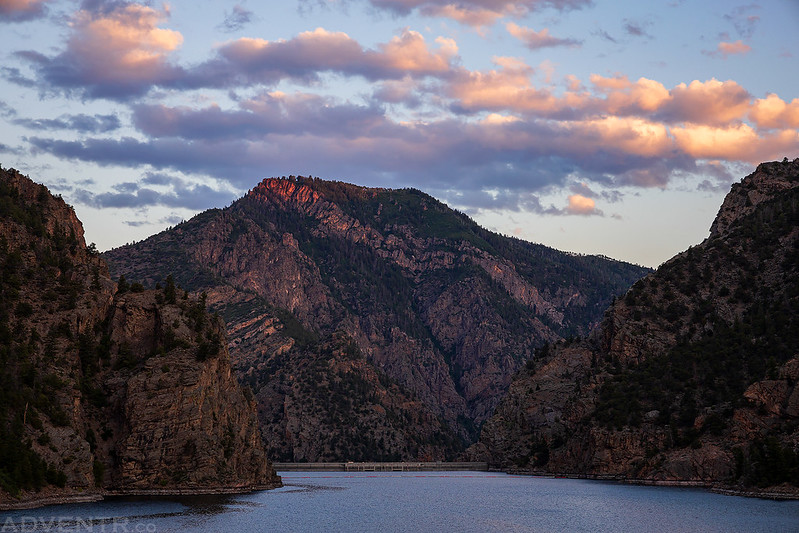 Leaving the Morrow Point Reservoir behind as we started climbing back out of the Black Canyon. 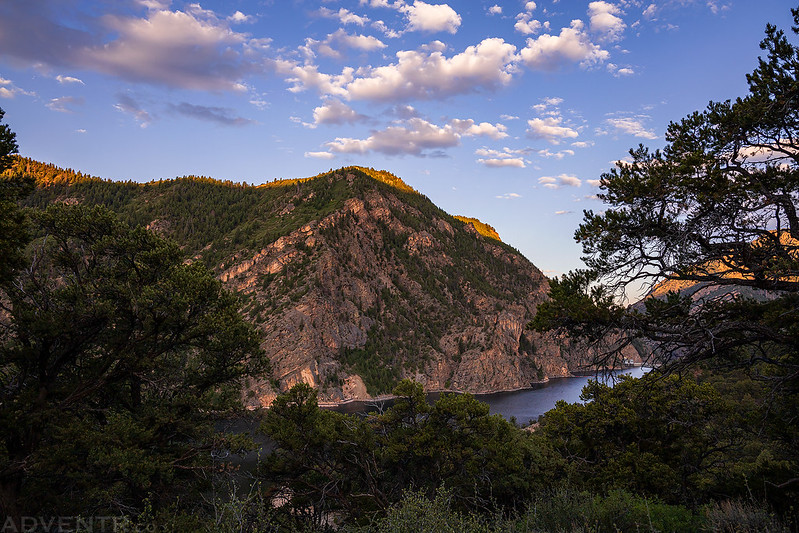 Most of the sky was clear this morning, but there were a few clouds left over this peak to the west. 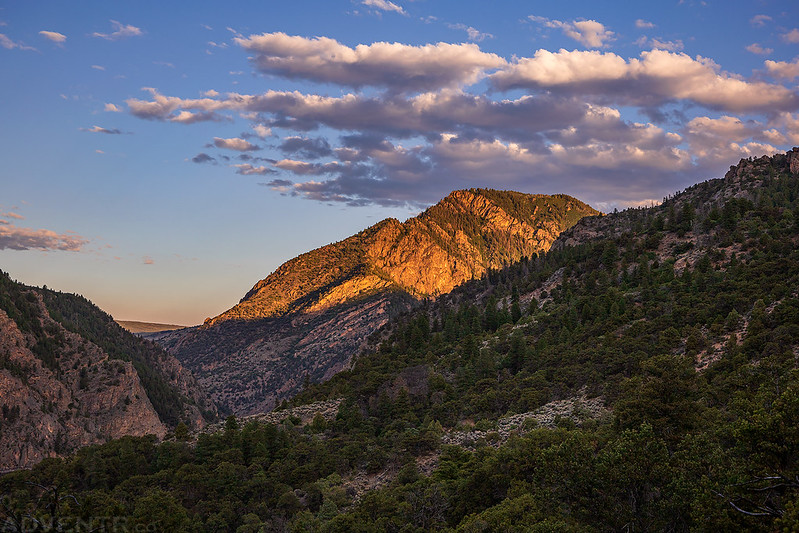 There were a couple of benches spread out along the trail where you could stop and rest. 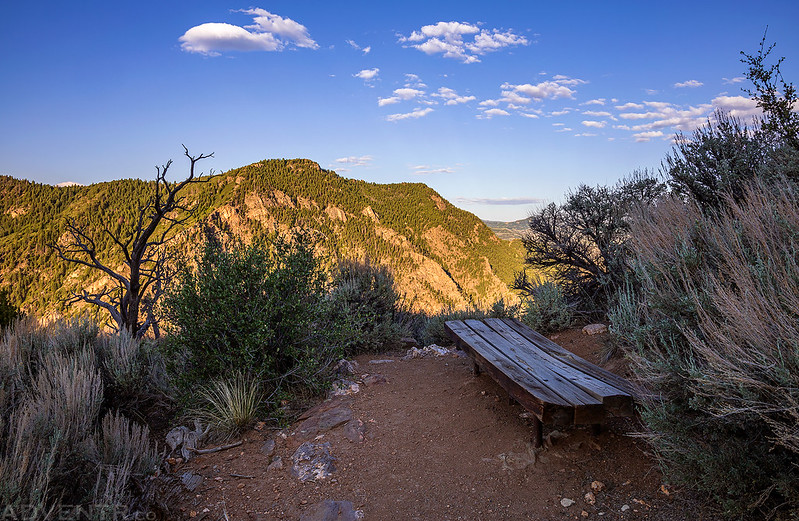 A smoky view of the San Juan Mountains. 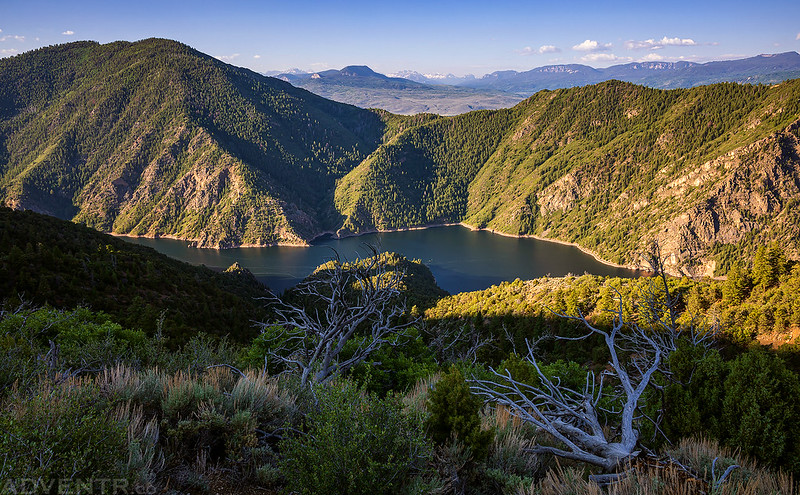 Hiking back up the Hermits Rest Trail. 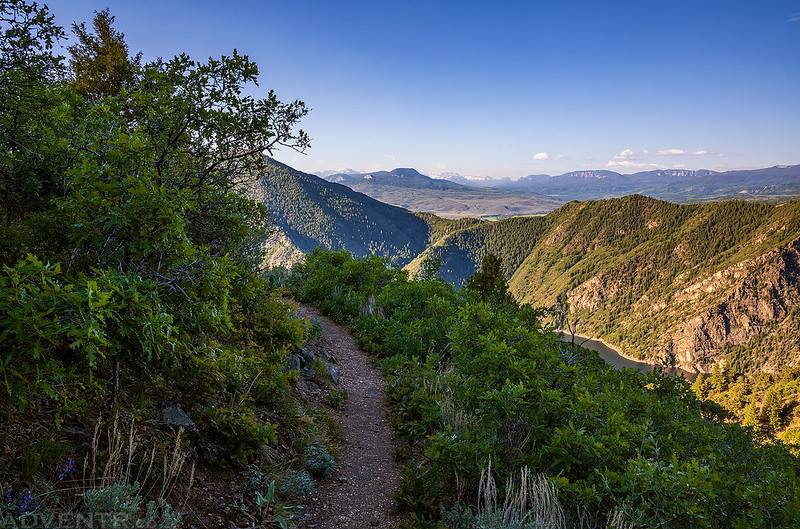 There were more wildflowers along the upper part of the trail than further below, so I stopped to take a few photos since they were in the shade. 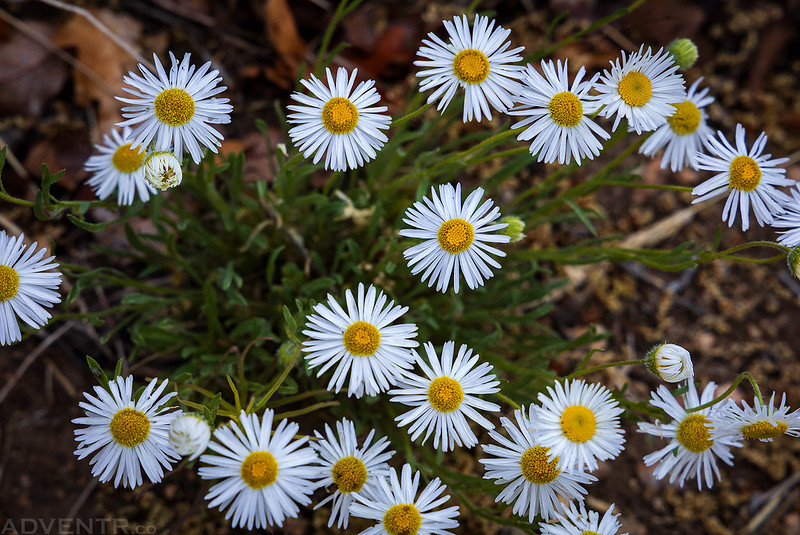 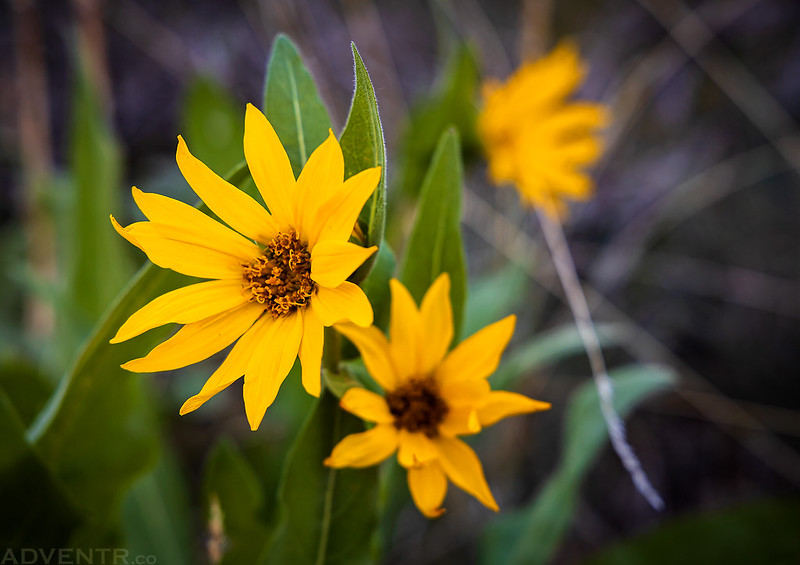 We made it back to the trailhead in just over two hours and were back home by lunchtime. This turned out to be a nice quick overnight trip in the Curecanti National Recreation Area and was exactly what I needed before we started our move across town.