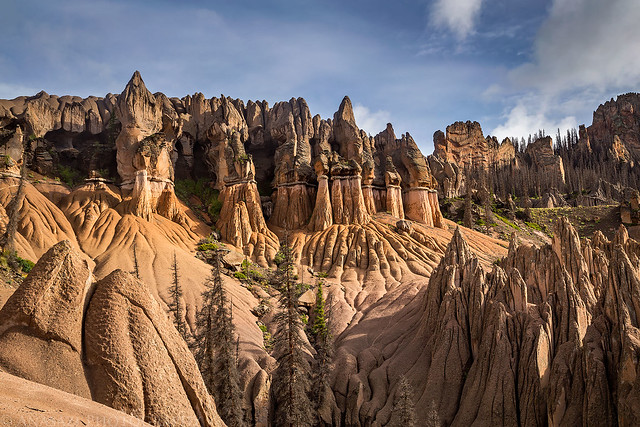 The Wheeler Geologic Area inside the La Garita Wilderness near Creede, Colorado.

Spending the evening at the end of the Wheeler Road near our campsite. 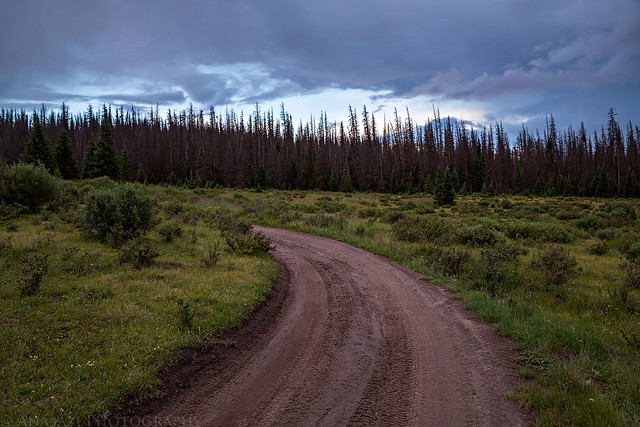 Colorado’s Wheeler Geologic Area was once a pretty popular tourist attraction in Colorado back in the horse-and-wagon era. Reporters dubbed it the “Bryce Canyon of Colorado” and it was reputedly the state’s second most popular tourist attraction after Pikes Peak. This small natural wonder, tucked into a hidden valley below the crest of the La Garita Mountains, was even designated as Wheeler National Monument by Theodore Roosevelt in 1908 and was actually Colorado’s very first National Monument. Back in the late 1800’s, people were accustomed to travelling long distances by rail, wagon, horseback, and foot to reach distant places, so they didn’t mind spending a few days to reach Wheeler. However, once automobile based tourism took over, Wheeler National Monument received much less visitation since this isolated area was difficult to reach by vehicle. At that time only an average of 50 people visited each year. Over the years Wheeler National Monument changed hands from the Forest Service to the National Park Service and then back to the Forest Service until congress eventually removed the Monument status and added it to the La Garita Wilderness, leaving one strip of road in place for vehicle access. These days you have two main options to visit this area. The first is to hike seven miles from Hanson’s Mill to Wheeler and then return the same way, or the other is by taking a bumpy 14 mile Jeep road. We chose to drive the road this time since we were short on time and didn’t have our backpacking gear with us.

I went for a short hike in the evening after setting up camp. 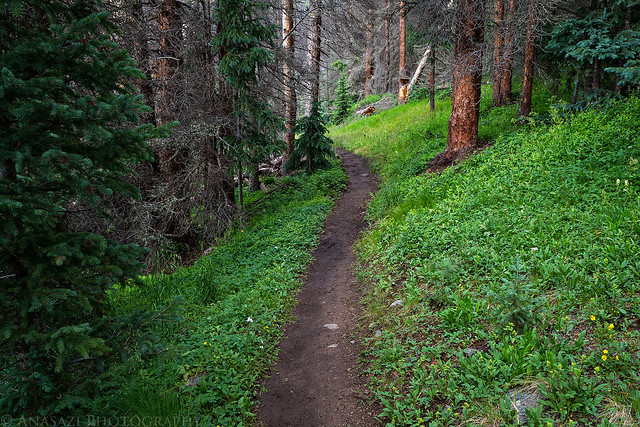 I’m not going to lie, I was a little concerned about how bad the road was going to be. The Forest Service doesn’t recommend Jeeps and other full-sized vehicles driving the road to the end and instead suggests taking an ATV or UTV. I’ve heard this story many times before since the Forest Service doesn’t want inexperienced people getting in over their head and I’m happy to report that their warnings are overblown in this case, too. It’s definitely a slow and bumpy drive with a few steep sections and a little mud, but there’s nothing technically difficult along the way to deal with.

We arrived at the end of the road shortly before sunset and found a very nice campsite at the edge of the La Garita Wilderness boundary. 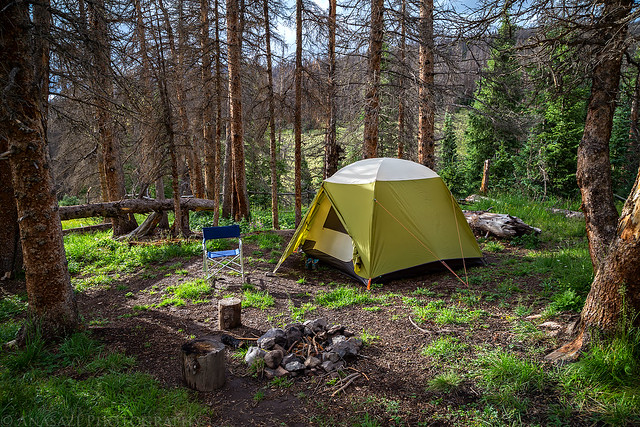 After going on a short hike in the evening I headed back to camp and got in the tent so I could go to bed early. It had been a long day and I was pretty exhausted. Just like the night before, as soon as we got into the tent it started to rain. This time it rained much harder than the day before and continued for a couple of hours, but it did not rain all night this time.

We slept in on Sunday morning to try and catch up on sleep, which worked out nicely since it was still too cloudy and overcast for a decent sunrise. When we finally woke up we went for a hike around the Wheeler Trail so we could finally visit this unusual geologic area. I hiked the entire three mile loop, but Diane was still tired from the previous day and chose to wait for me at the intersection since there was going to be some more elevation gain. Everything was wet from the rain overnight and the trail up to Half Moon Pass was pretty overgrown, so my pants and boots quickly got soaked! I was hoping there would be some nice views of the formations from the east, so I opted to hike the trail in a counterclockwise direction, but there were too many dead trees and limited views along the way. It was a little discouraging. Near the end of the loop I began to wonder if I would find any decent view of the area, but just before closing the loop I finally reached a very nice overlook. If you are looking for a good view of the area and don’t want to hike the entire loop, I’d recommend going left at the intersection to the best viewpoint.

Starting our hike on the Wheeler Loop Trail. 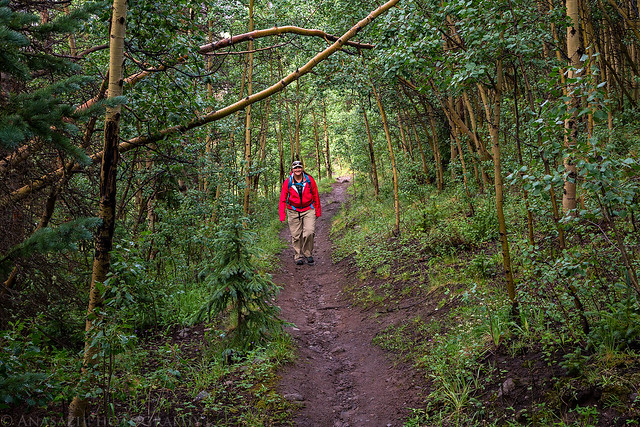 The main intersection of the loop trail. You can go either direction to create a loop. I went right in a counterclockwise direction. 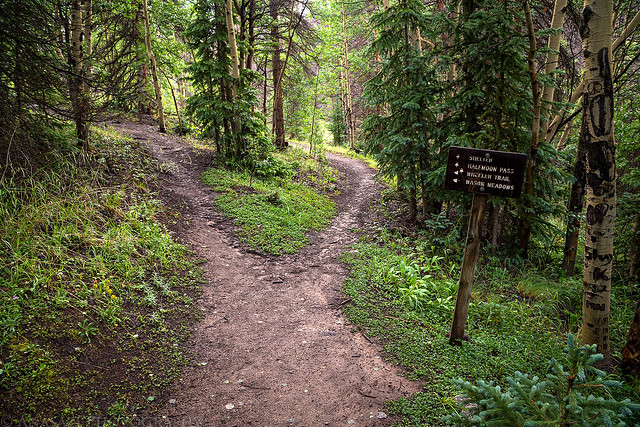 An old shelter along the trail. 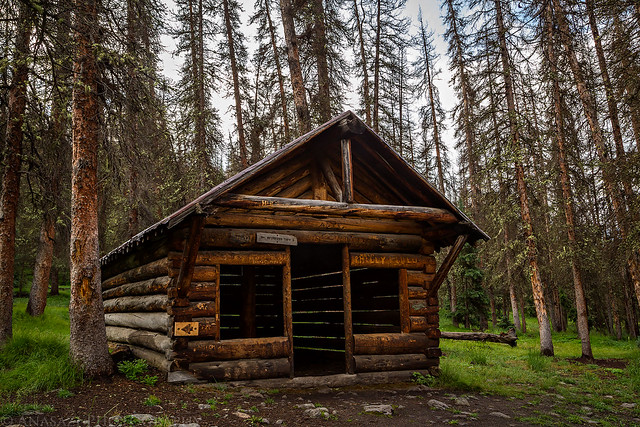 Finally a little sunlight breaking through the clouds and trees. 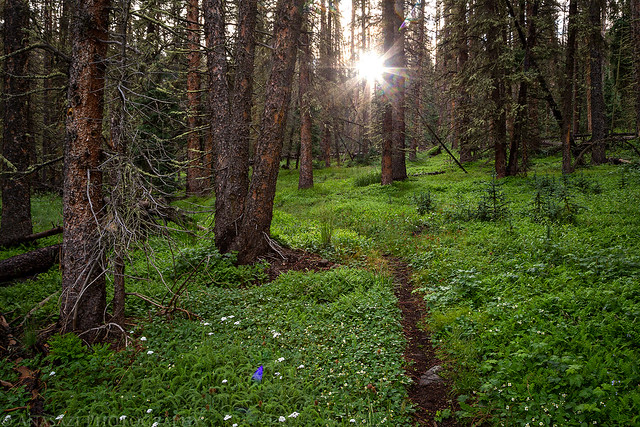 Nearing the high point of the trail I finally had a decent view over West Bellows Creek and Silver Park. 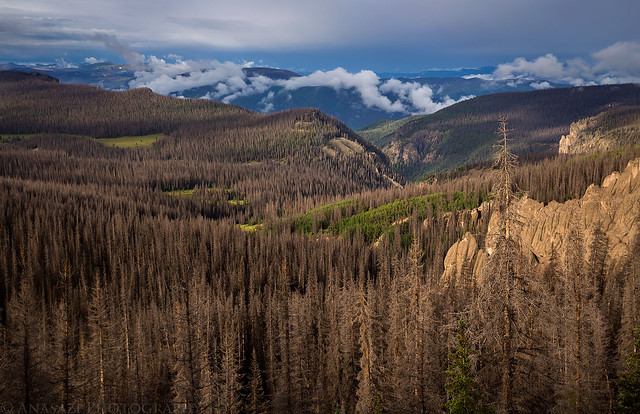 This was probably the best overlook on this side of the trail, but even so the view was still blocked by a lot of dead trees. 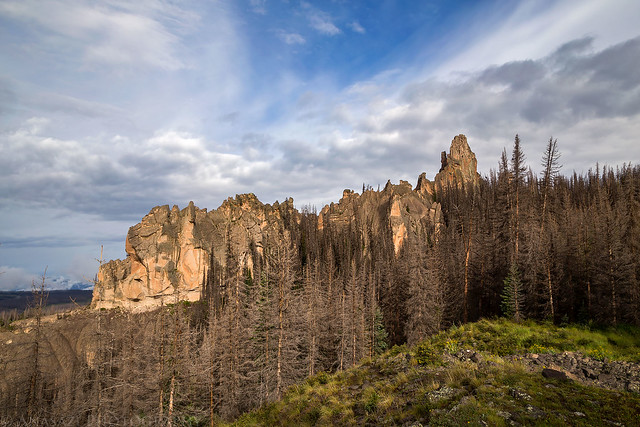 Above the Geologic Area formations on the Half Moon Pass Trail. The high point of the trail was around 11,900 feet. 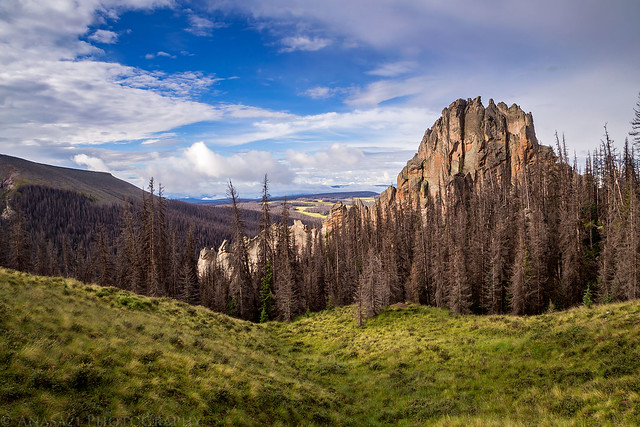 Starting down the loop on the other side, the trail weaved its way through a few of the formations. 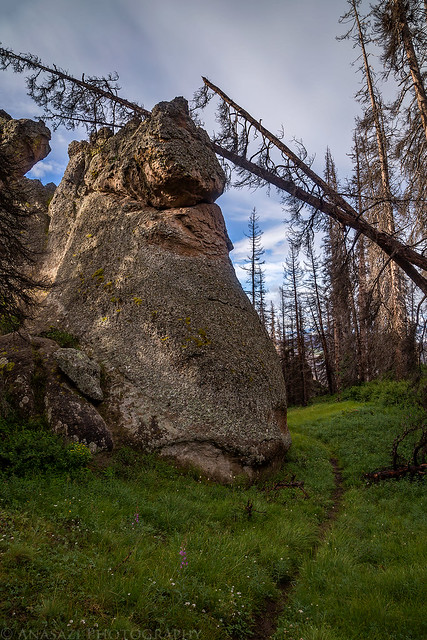 There were some nice patches of wildflowers along the trail. 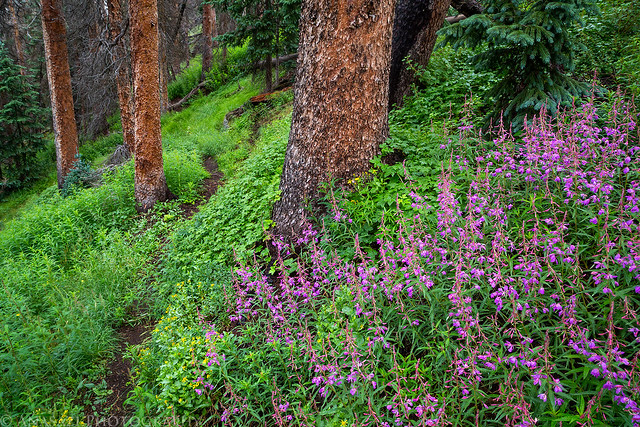 The trail entered this big opening on the way down.

The best views of the area are located here, where they built a bench. 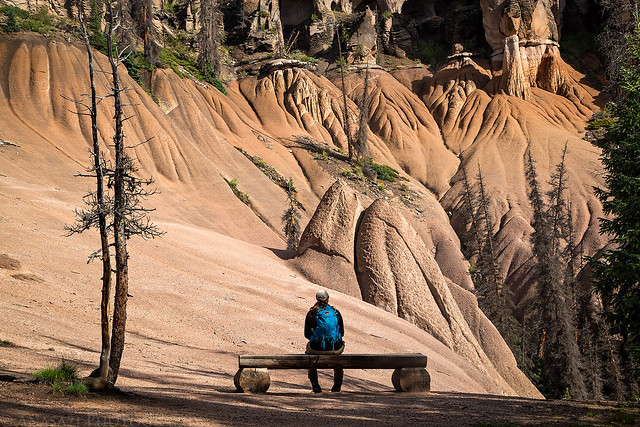 Diane takes in the view and adds a little scale to the scene. 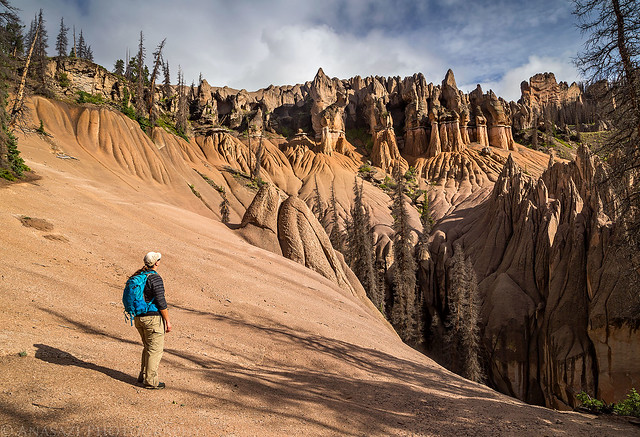 A closer look at some of the hoodoos. 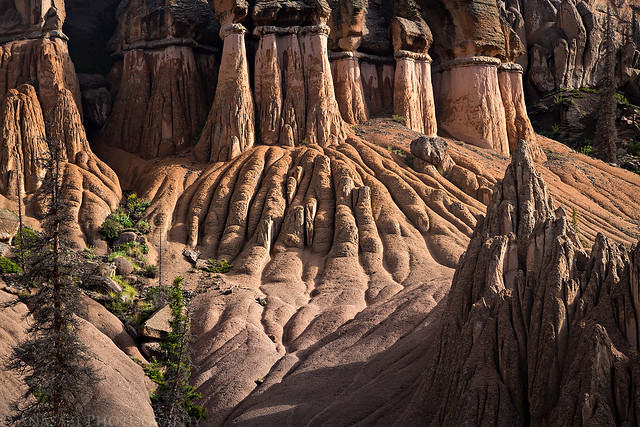 Diane hikes down the trail ahead of me near another set of interesting formations. 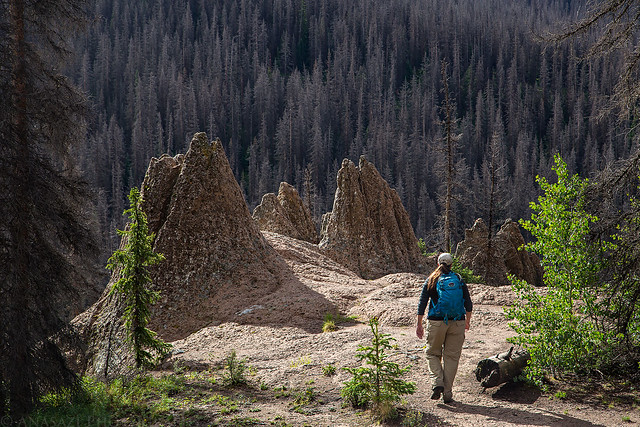 While Diane was waiting for me to finish hiking the loop, she did a little exploring of her own and found a cool little canyon that she took me to when I returned. It was a fun place to visit. 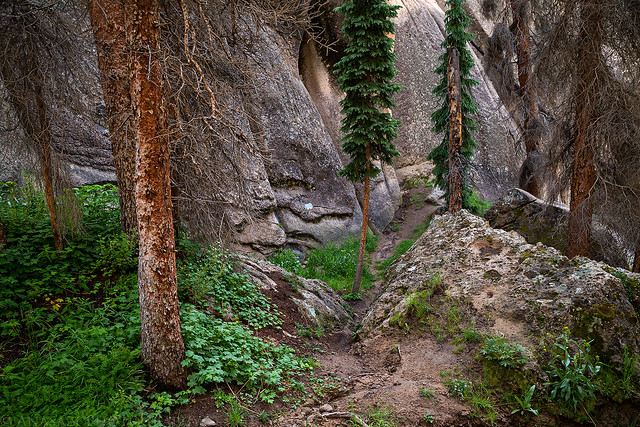 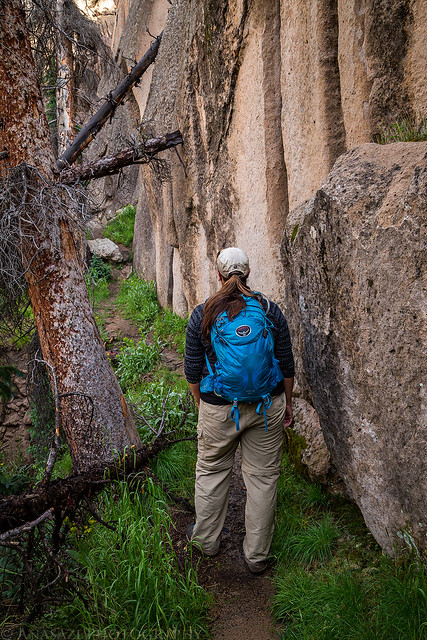 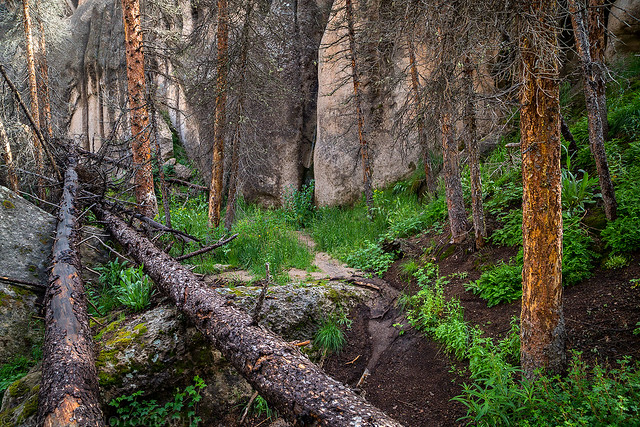 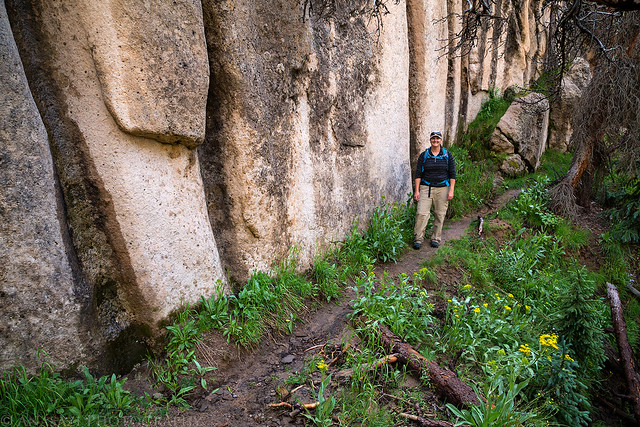 After returning to the trailhead we packed up our wet gear into the Jeep and started the bumpy and muddy drive back out. It took us about an hour and a half to reach Hanson’s Mill Trailhead from the end of the road. Then it was a easy but long drive back home.

A little bit of light on the edges of Palmer Mesa as we drove back out. 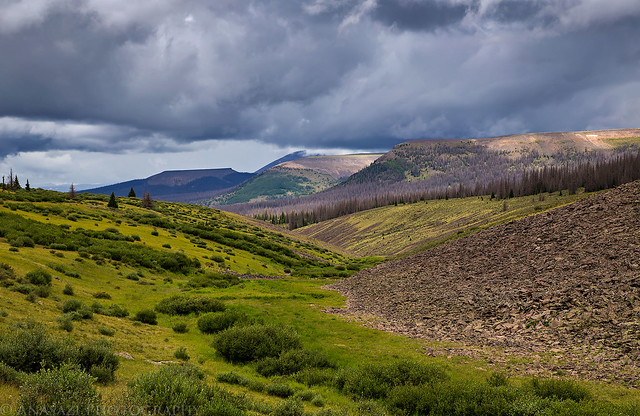 Storm clouds were moving in early today, so it was a good thing we didn’t stick around too long. 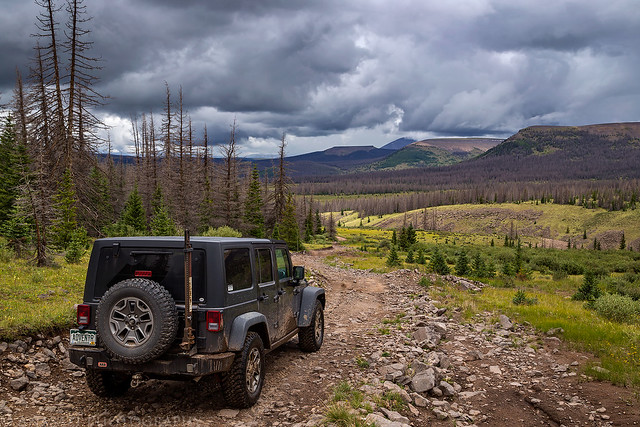