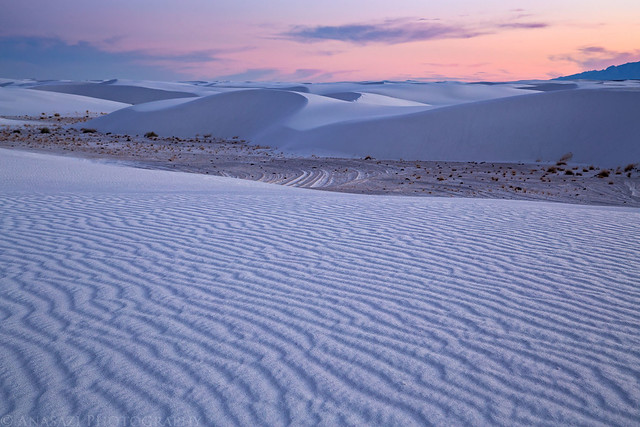 A beautiful and colorful sunset in White Sands National Monument.

When the doors opened we were able to get a permit for the night and then we went on a short drive through the Monument and hiked across a few of the dunes close to the road. The park got very busy very quickly so we decided to leave for a few hours and return later in the afternoon to hike to our campsite. Plus, the unseasonably high temperatures we had experienced the past few days were still sticking around and we figured it would cool down a little later in the day, too. 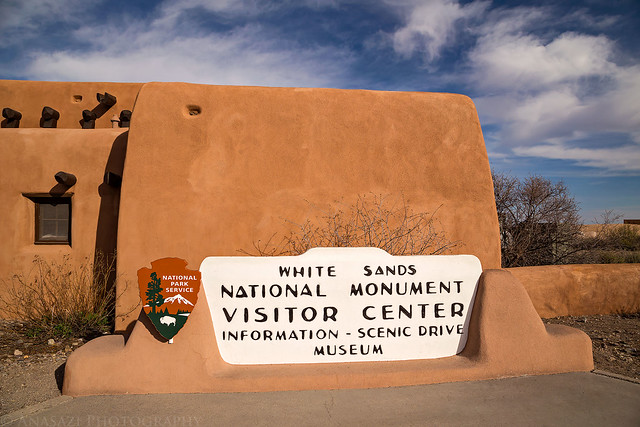 When we first got into the park Diane found this abandoned sled in the parking lot and give it a try. It didn’t work so well. 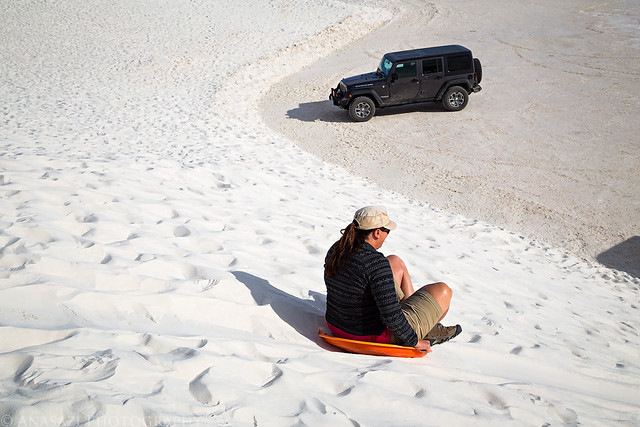 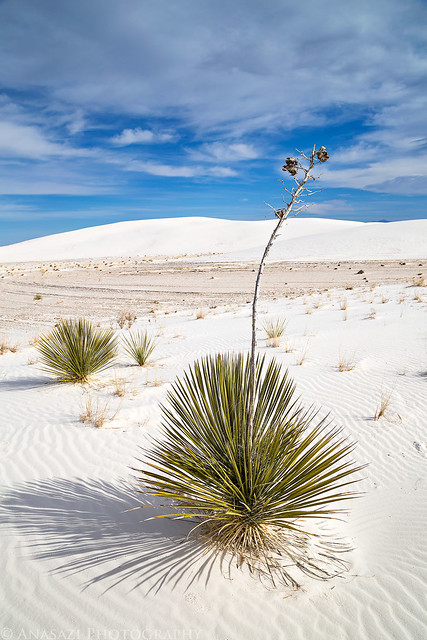 My Jeep parked at the base of a white sand dune. 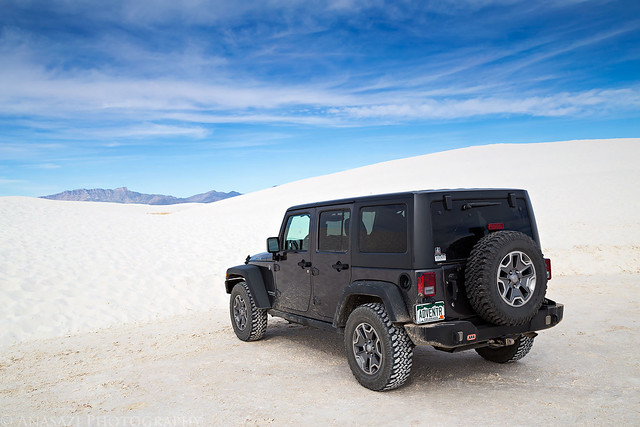 We returned to the park a few hours before sunset, loaded our packs and hiked across the dunes to our designated campsite. It was a pretty short hike and the sand was mostly solid and easy to walk on the whole way, so it didn’t take long for us to get there. We setup camp and then headed into the Heart of the Sands to explore and take photos until the sun went down.

Diane ready to start hiking to our campsite. 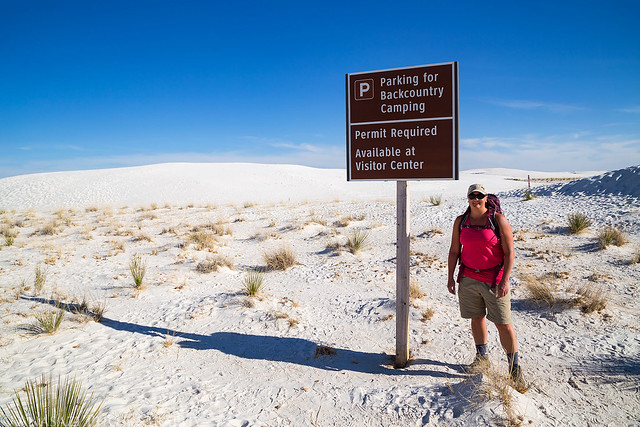 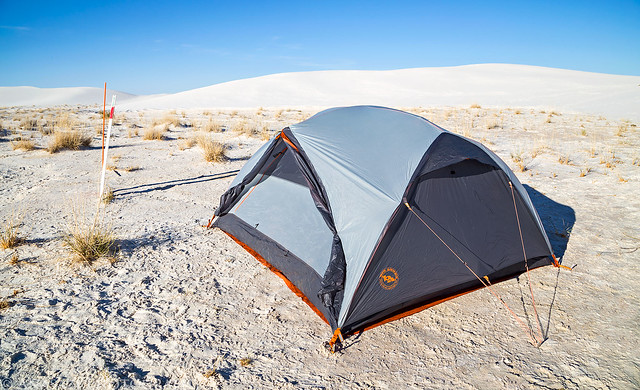 A lot of different textures to be found… 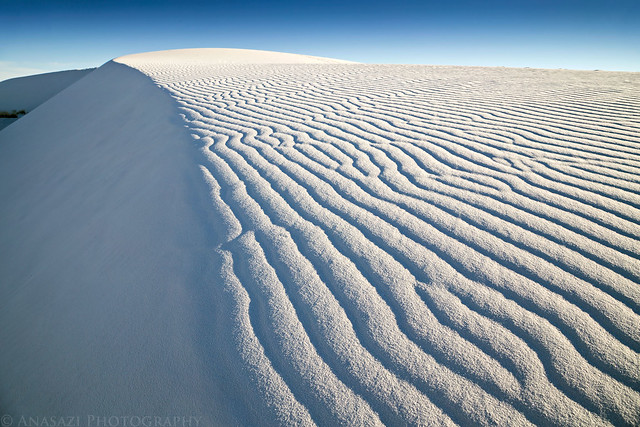 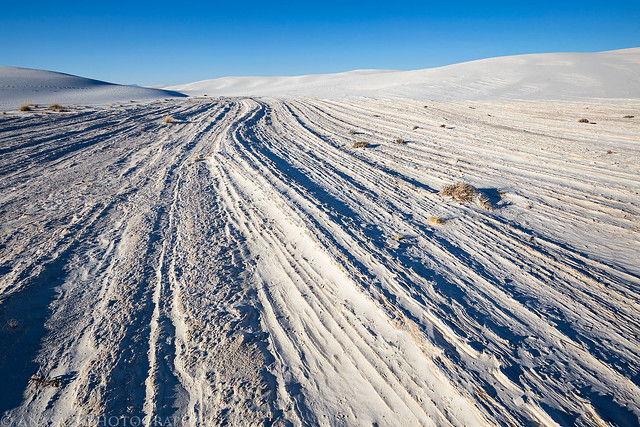 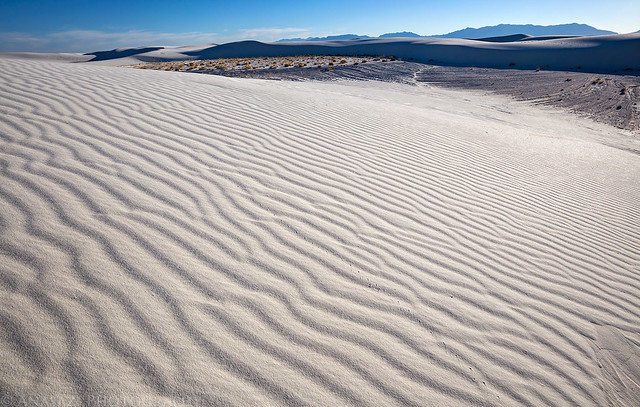 Hiking in the dunes. 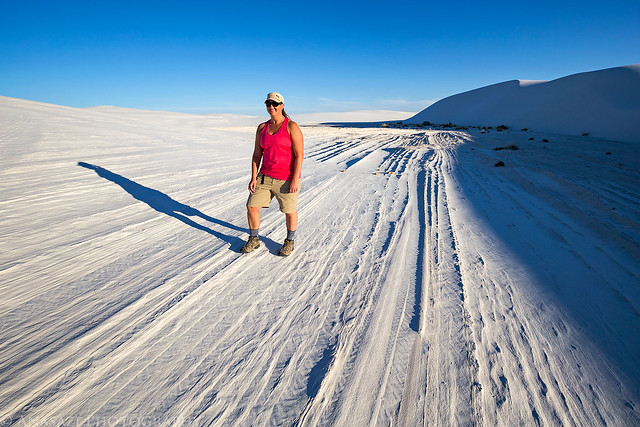 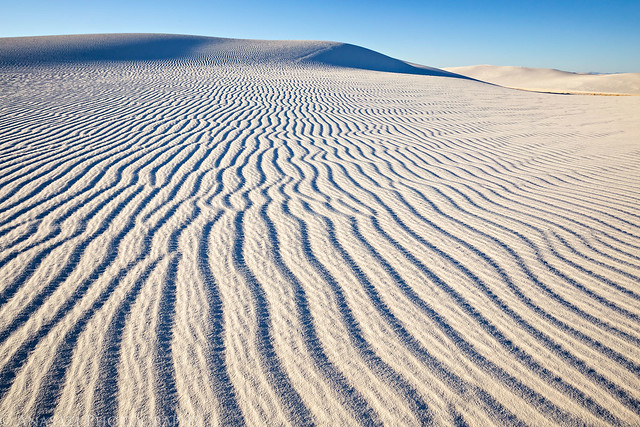 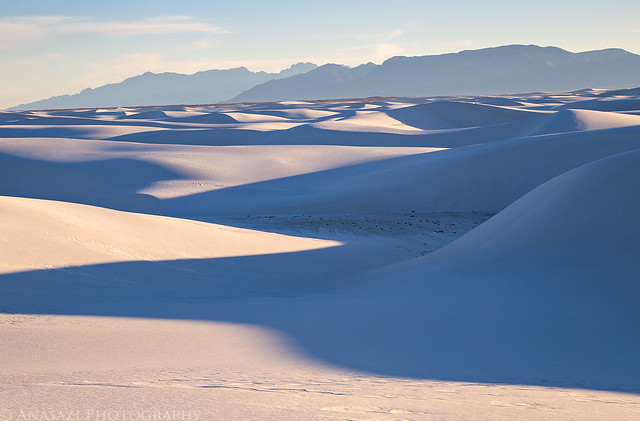 The light was beautiful and warm as the sun began to drop below the San Andres Mountains. 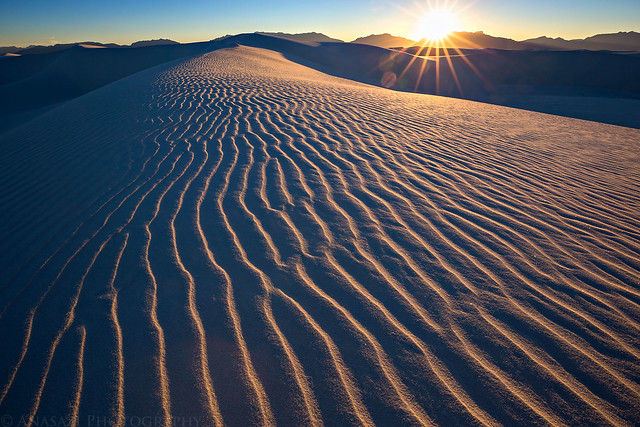 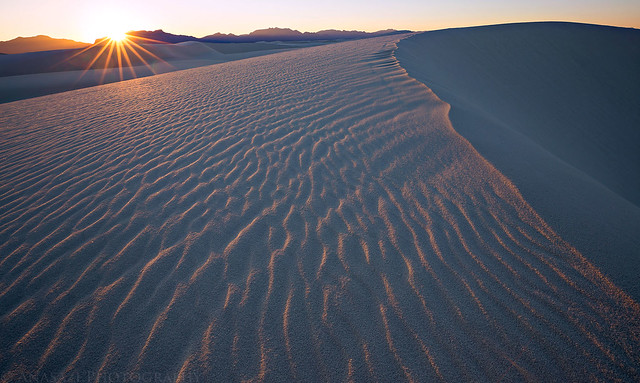 We had a lot of fun exploring these awesome sand dunes, especially after the sun went down and the colors got very interesting. At times it felt like we were walking in another world! As it started getting darker out, the light got strange and started to blend in with the white sand. It was a bit disorienting and I could see how easily someone could get lost out here if they weren’t careful.

Diane in another world. 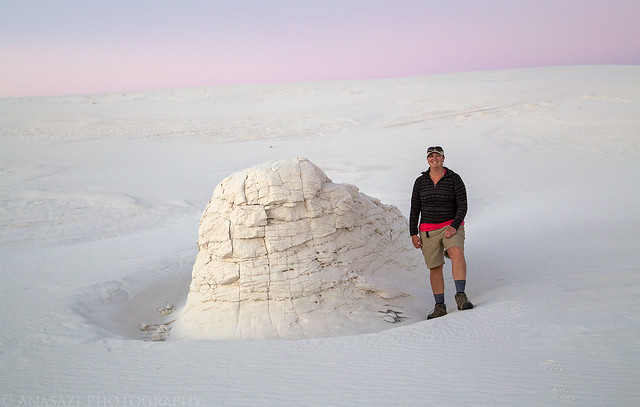 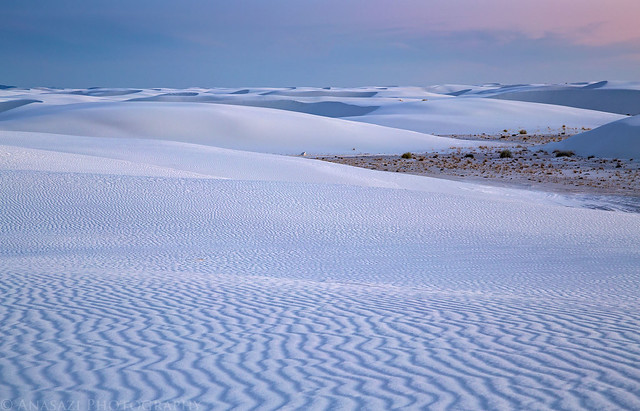 A touch of alpenglow on the dunes with Sierra Blanca in the distance. 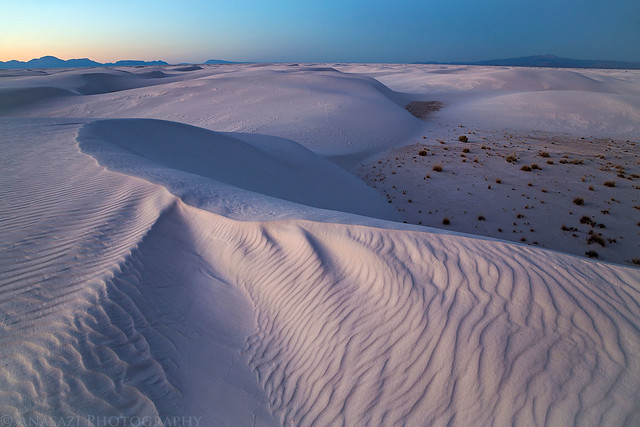 We slept well that night. There was very little wind and the temperature was comfortable. Diane slept in later this morning but I got out of the tent shortly before sunrise and went exploring by myself for a little while.

My shadow and warm light on the sand dune near camp. 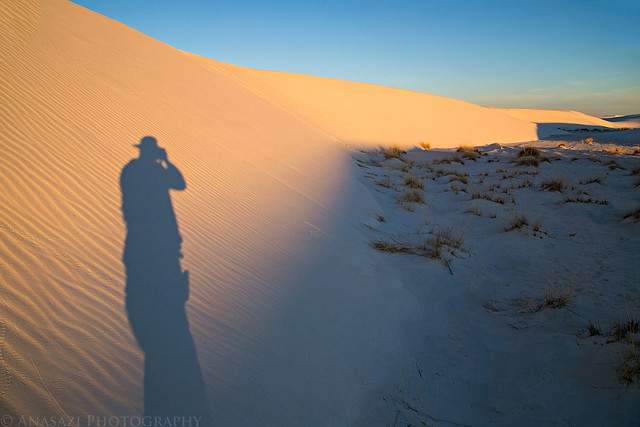 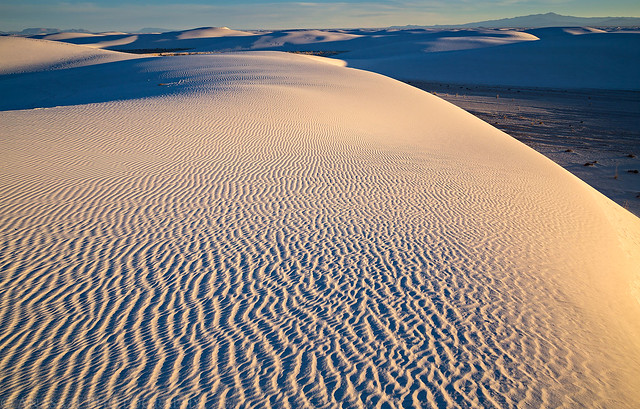 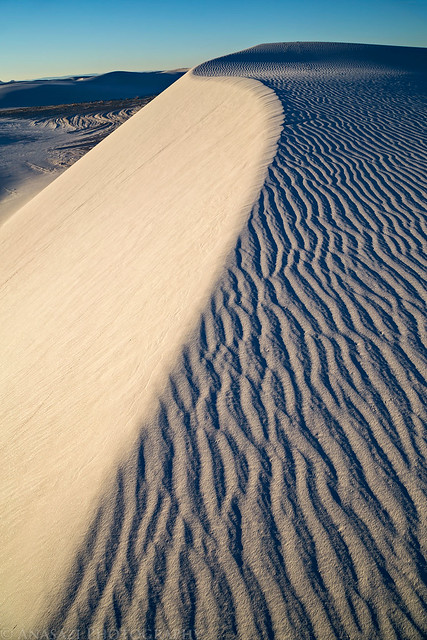 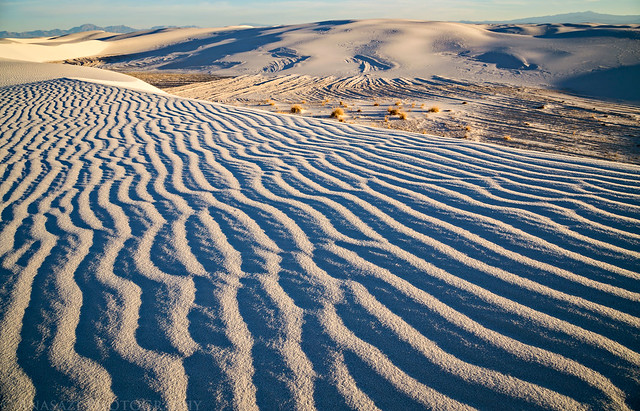 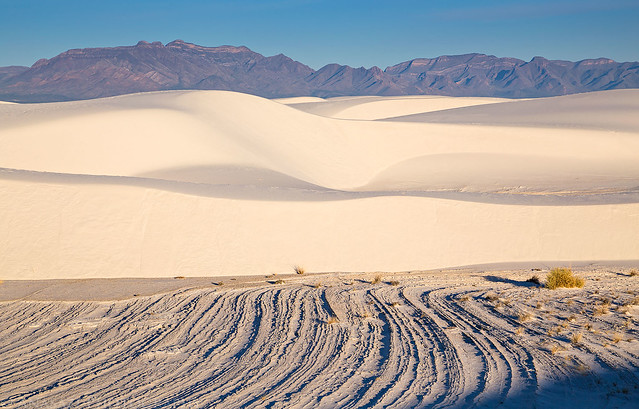 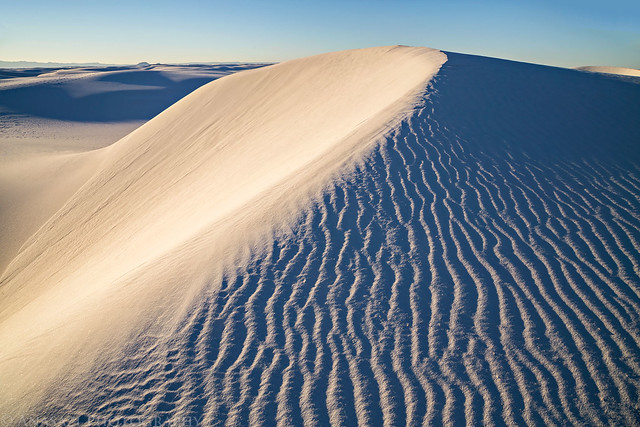 This buried yucca caught my eye as I was returning back to camp. 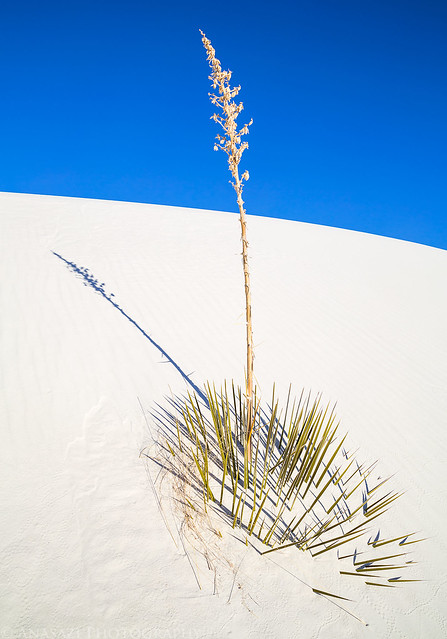 After returning to the trailhead we loaded up the Jeep and left the White Sands behind as we started driving north to Albuquerque. When planning the route for our honeymoon adventure we had hoped to catch a concert somewhere along the way, and that opportunity presented itself when Skillet and Devour the Day announced a show at The Historic El Rey Theater in Albuquerque late in 2016. I had purchased tickets when they went on sale in December, which was a good thing since the show sold out, and we spent the evening at the concert.