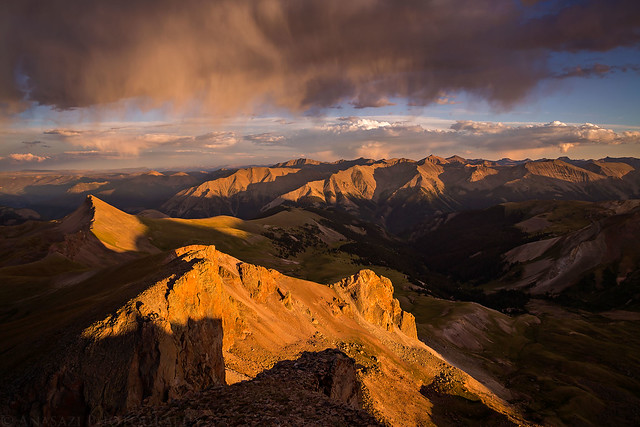 A beautiful sunset over the San Juan Mountains from the Uncompahgre Peak trail.

This weekend was our first opportunity to give Uncompahgre Peak a try, so we left home on Saturday morning and took the scenic drive through Ouray and over Engineer Pass on the Alpine Loop to camp near the trailhead for an early Sunday morning start. The road along Mineral Creek on the way to Engineer Pass was in the roughest shape I’ve seen it, but still no problem for my Jeep. Before reaching Engineer Pass, I took a side road to the saddle east of Engineer Mountain (13,218) so I could take a quick hike up to the summit of Seigal Mountain (13,274). It was a short and easy hike across the alpine tundra that provided nice views of the surrounding mountains and the Uncompahgre Wilderness area.

A view up Poughkeepsie Gulch from the Mineral Creek Road. 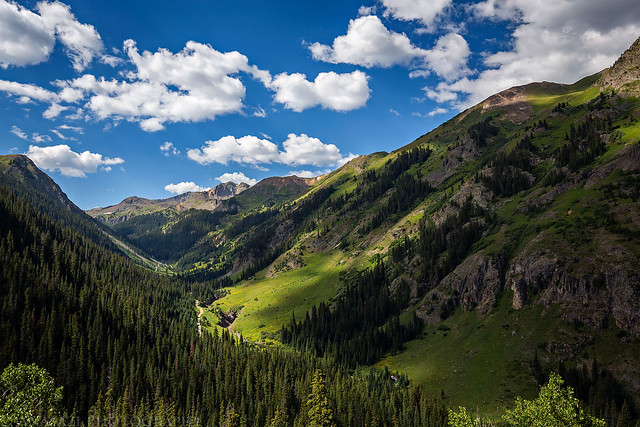 My Jeep parked at the saddle below Engineer Mountain. 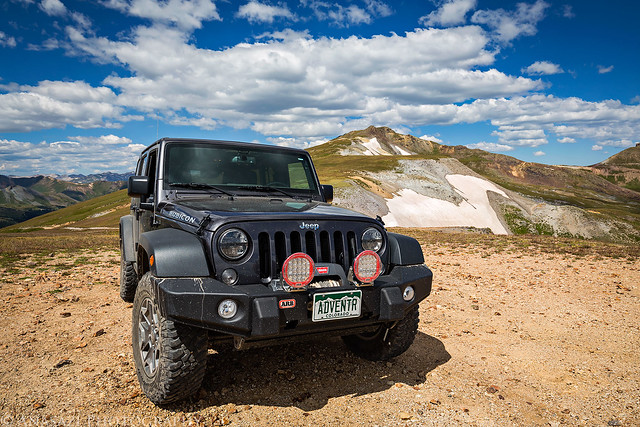 Following the ridge to Seigal Mountain, which is not visible yet. 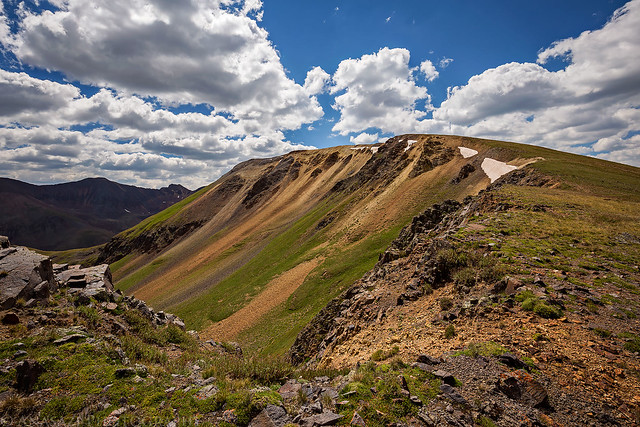 The view from the ridge over Schafer Gulch with Wetterhorn Peak and Uncompahgre Peak on the horizon. 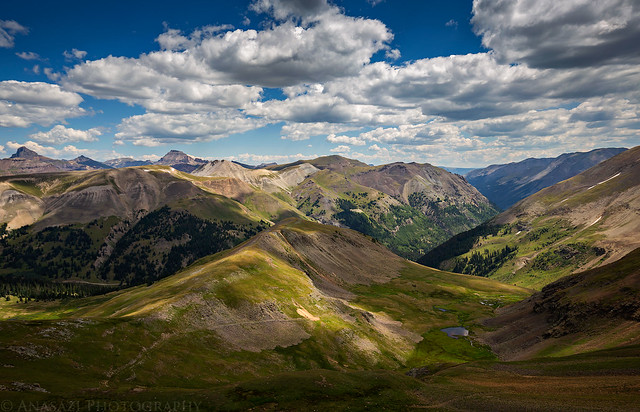 My first view of Seigal Mountain after cresting the first ridge. 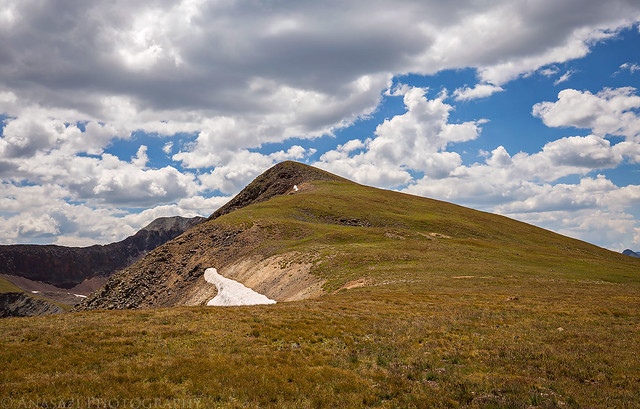 The view from the summit over Denver Pass, Animas Forks Mountain (13,722) and an unnamed lake below. 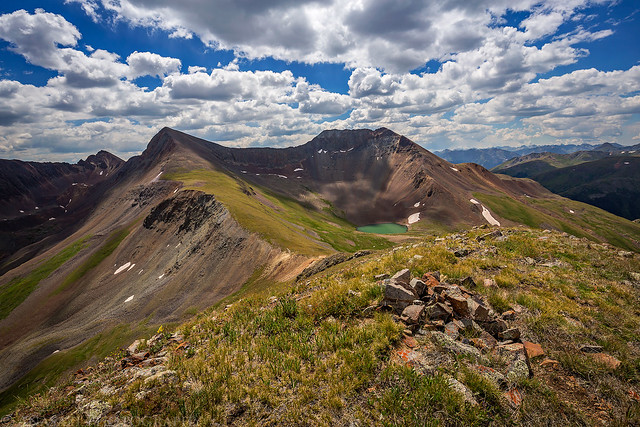 Coming back down the ridge. If you look closely you can see my Jeep parked below. Plus there’s a nice view over the Uncompahgre Wilderness including Wildhorse Peak, Coxcomb Peak and Wetterhorn Peak. 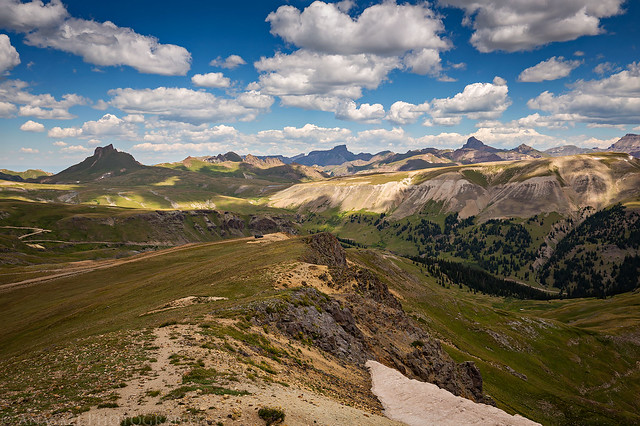 After the short hike we finished the drive over Engineer Pass and took the road up Nellie Creek to the trailhead for Uncompahgre Peak. We found a great campsite in the tress before reaching the trailhead and setup camp. Then we headed down to Lake City and had an early dinner in town. Before leaving town we checked the weather for an updated forecast and found that it was still supposed to be pretty dry for the remainder of the day and on Sunday. We still had a few hours until sunset so we were trying to find something to do. On a whim, I suggested that we head back up to the Uncompahgre Trailhead and hike to the summit this evening instead of waking up early on Sunday morning since the weather was looking good. Diane liked the idea, so we drove back up to the trailhead and started the hike.

At the trailhead and ready to begin the hike. 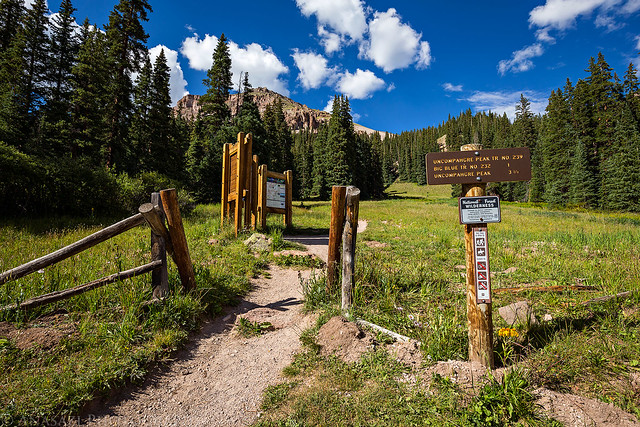 Following the trail along Nellie Creek. 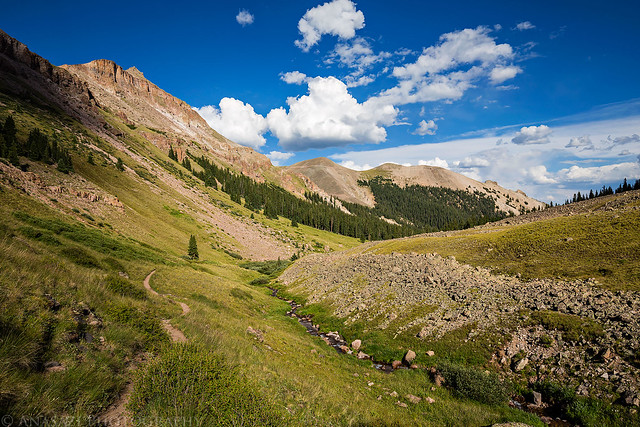 Diane hikes ahead of me with Uncompahgre Peak looming above. 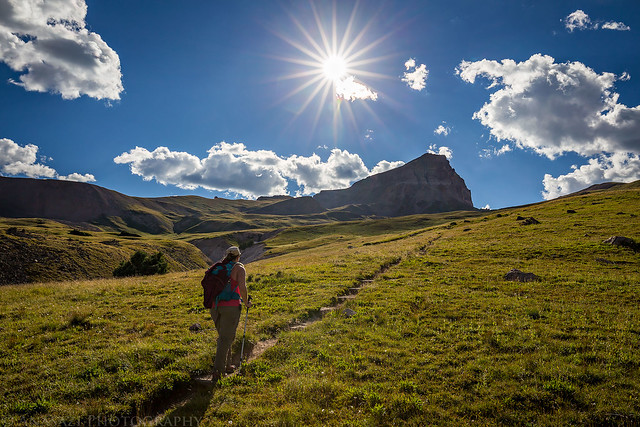 Uncompahgre and a sunburst. 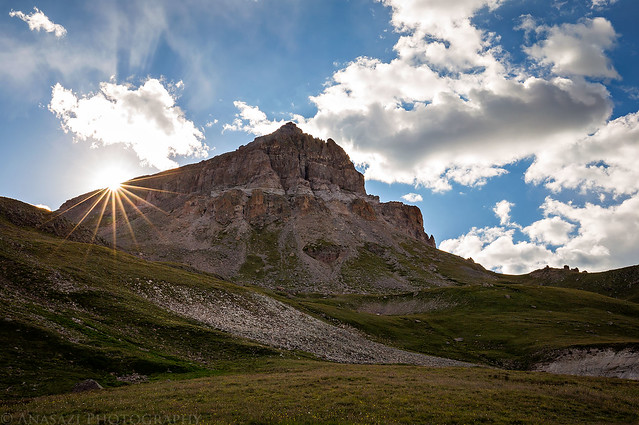 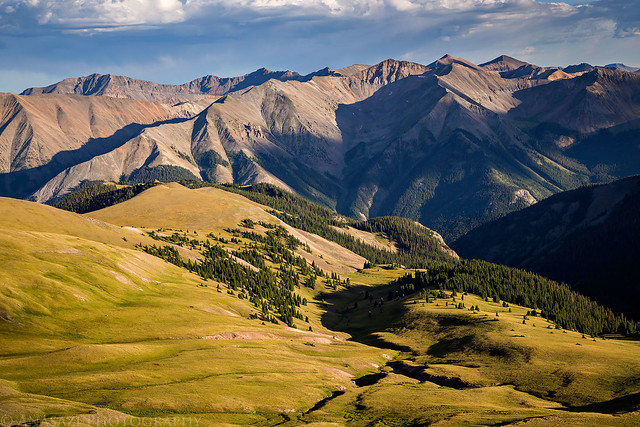 I love the view of Unnamed 13158 from the trail, especially with the virga in the distance. 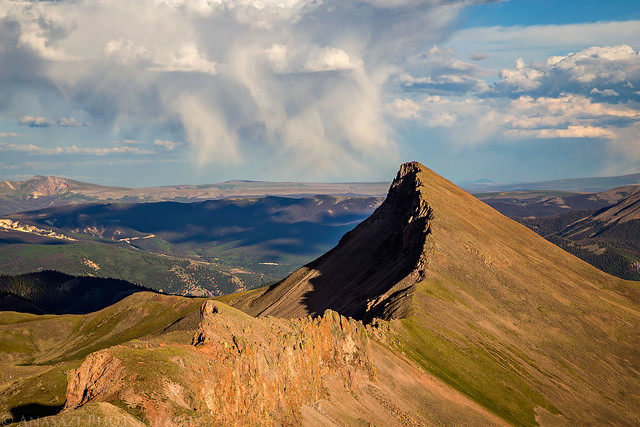 Getting higher on the trail as sunset approaches. 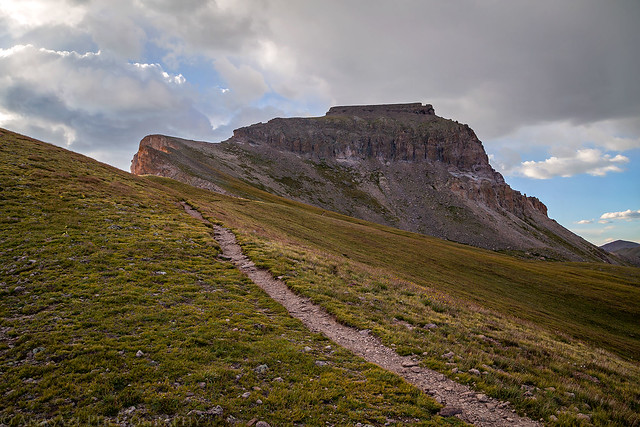 We had hoped to make it to the summit by sunset, but that didn’t quite happen. Instead, we caught the sunset from just under 14,000 feet from a ridge that offered us great views over the surrounding Uncompahgre Wilderness and beyond. It was an amazing sunset with great light, colors and clouds. There were even a few snow squalls around, including one that we got caught in for a couple of minutes. Hiking up Uncompahgre for sunset instead of in the morning turned out to be a great idea! 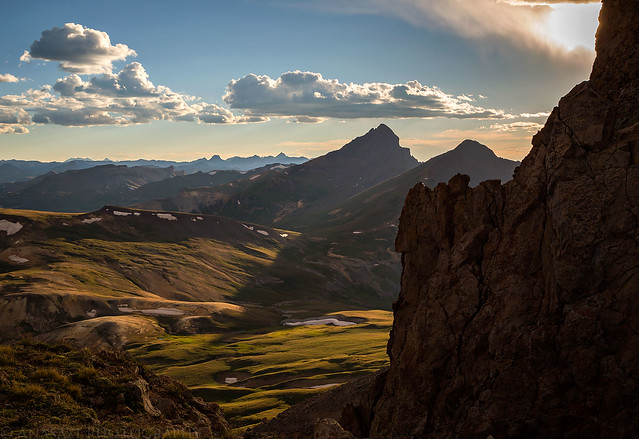 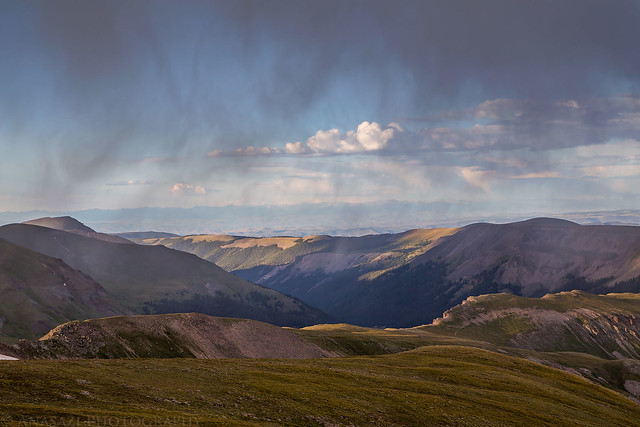 The clouds and the light were just amazing this evening! 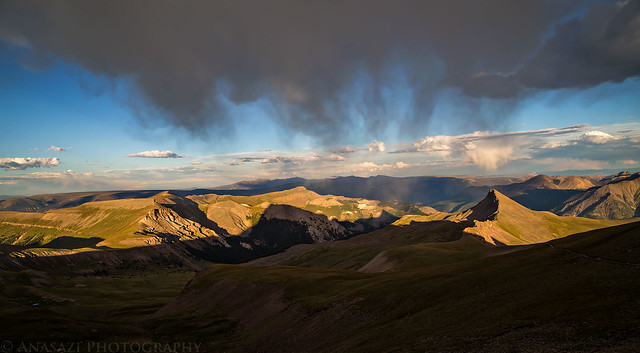 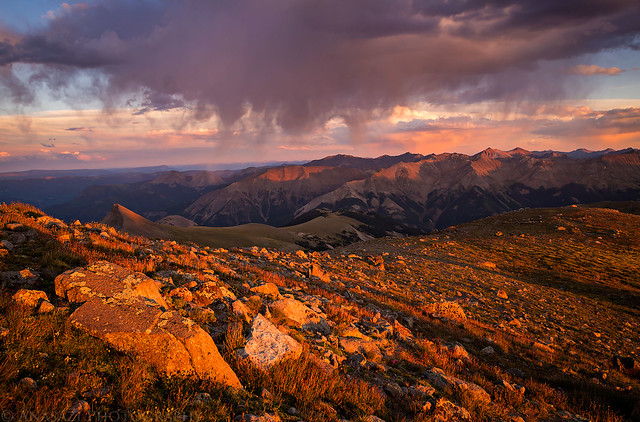 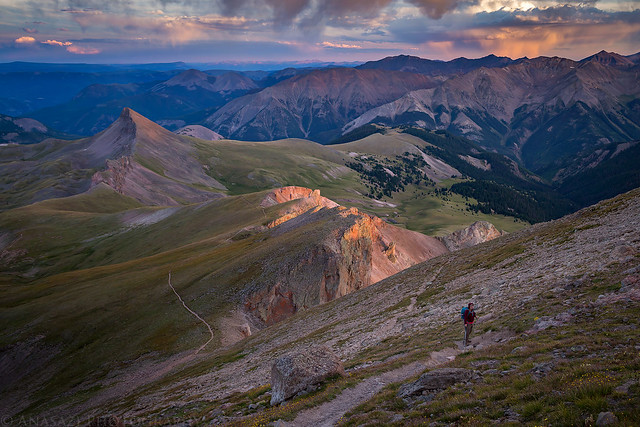 This is the area where we watched the sunset from. Just before the trickiest section of the trail to the summit. 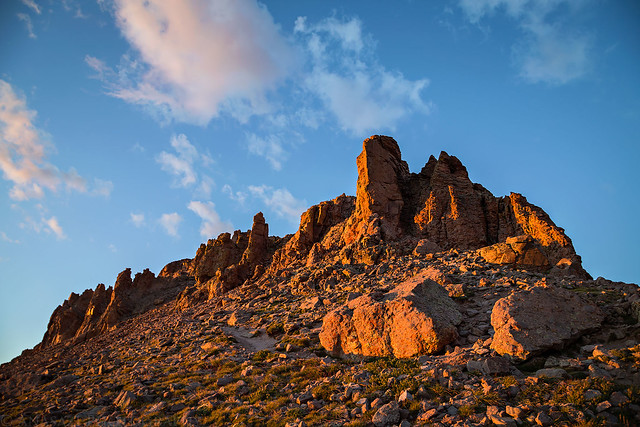 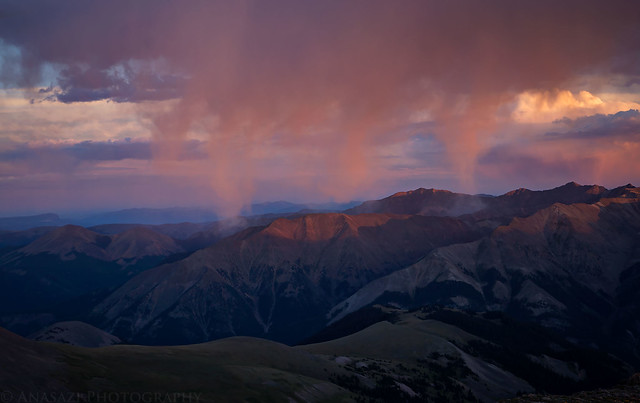 The sun sets between Coxcomb Peak and Redcliff with the La Sal Mountains in the distance.

Diane enjoying the last light of the day. 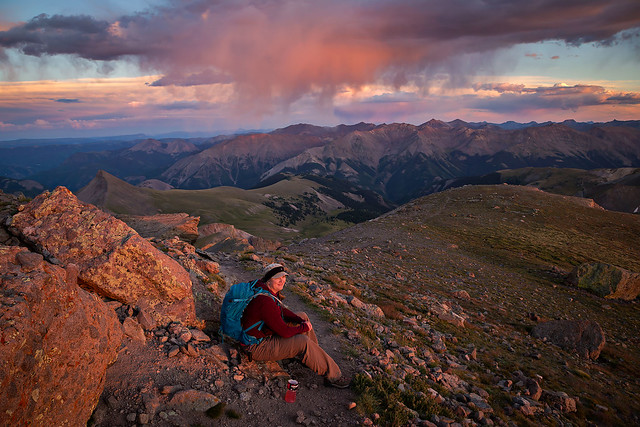 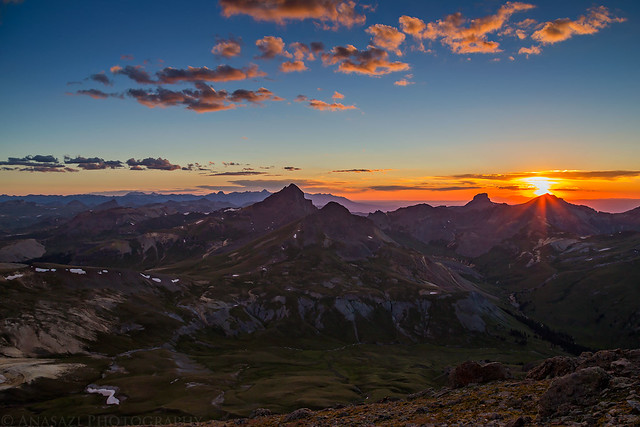 After the sun had set we finished the hike and short climb to the summit with the remaining light and then moonlight. It was dark by the time we reached the summit and we could see the lights of Gunnison, Montrose and Ridgway from the top. It was a surprisingly calm evening on the summit with very little wind and a mild temperature. The moon was bright so not many stars were visible, but it made the hike back down a little bit easier. However, we did follow the wrong steep chute back down, but we managed to find our way back to the trail. From there it was an easy hike back to the trailhead by headlamp and moonlight. We arrived back to my Jeep just before midnight, drove back to camp and went right to sleep. At least we could now sleep in late and wouldn’t need to set an alarm for 4:00am.

Diane climbing up the steep chute near the summit in the remaining light of the day. This is the last photo I took before it got too dark out to take any more without a tripod. 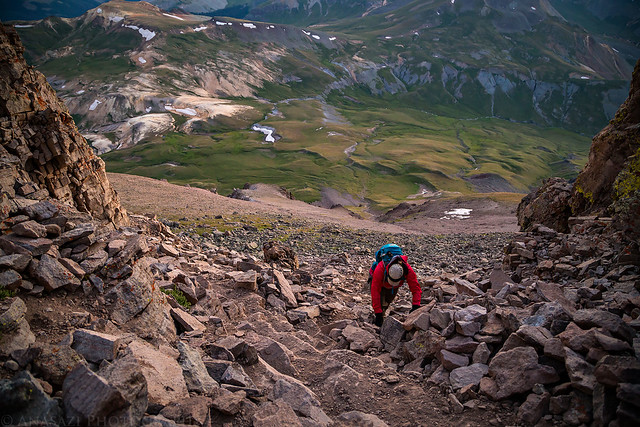 We woke up on Sunday morning much later than we typically would, broke down camp and then started the drive back home. It was another great weekend in the San Juan Mountains!