It’s not too often that one of my weekend adventures doesn’t go according to plan, but unfortunately this is one of those trips. I had planned to climb Castle and Conundrum Peaks in the Elk Mountains on Sunday morning but ended up cancelling those plans when I experienced altitude sickness for the very first time on Saturday night and decided to head home instead.

I left home early on Saturday morning and drove to Aspen where I followed the Castle Creek and Express Creek roads up to Taylor Pass (11,928) so that I could get a nice warm-up hike in. Since I had spent the previous weekend at a concert in Salt Lake City I felt it would be helpful to get acclimated by climbing an easier 13er. On a past trip to Taylor Lake I had planned to return another time to climb nearby Taylor Peak and though that this would be a good opportunity to do so. It seemed like the hike would be pretty straight forward starting from the pass and following the ridge, and that’s what I did. It ended up being about six miles round trip.

Sunrise on Mount Logan as I drove along I-70 at the base of the Roan Cliffs. 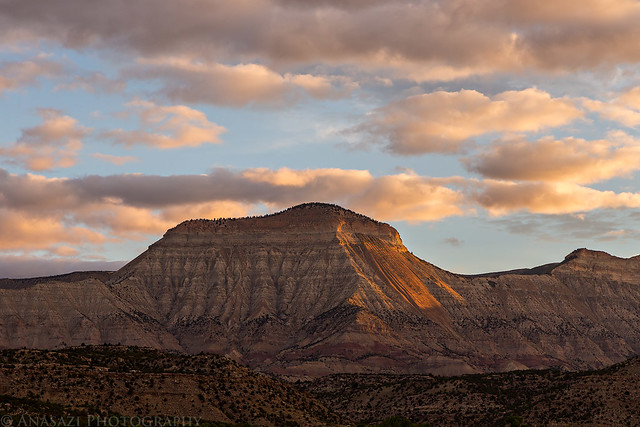 The road to Taylor Pass from Express Creek. 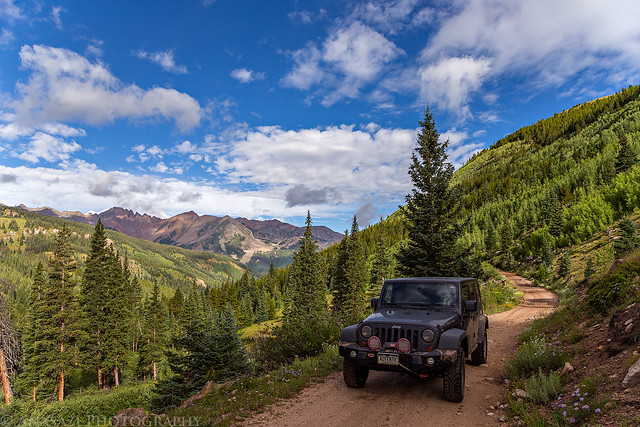 Taylor Peak (13,435) seen from Taylor Pass showing much of the route I would be hiking. 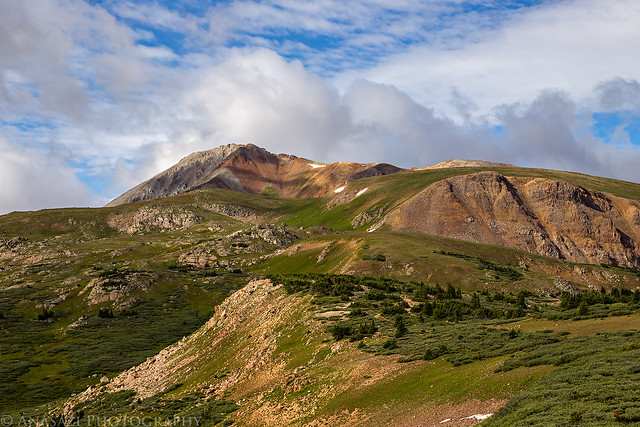 Following a rocky part of the ridge to Taylor Peak. 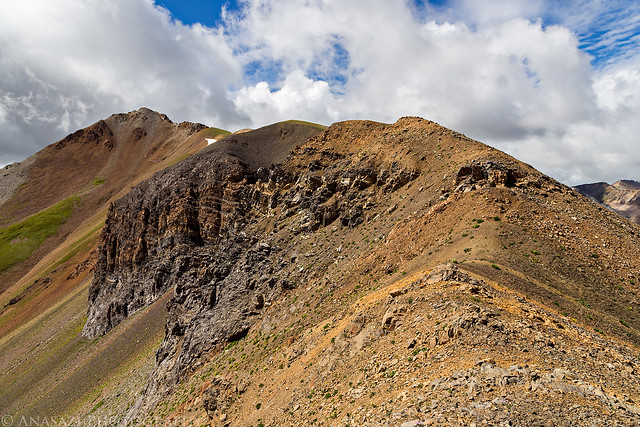 As I neared the peak, I reached this rocky section of the ridge that exceeded my climbing capabilities and I thought I would have to turn around without reaching the summit. Luckily, before I headed back I found a way to bypass this section on the left by dropping down below the top of the ridge a little. 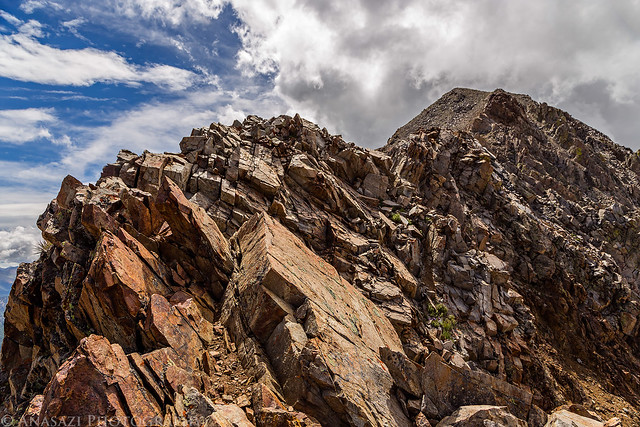 Looking back down the ridge from the spot I thought I would have to turn around. 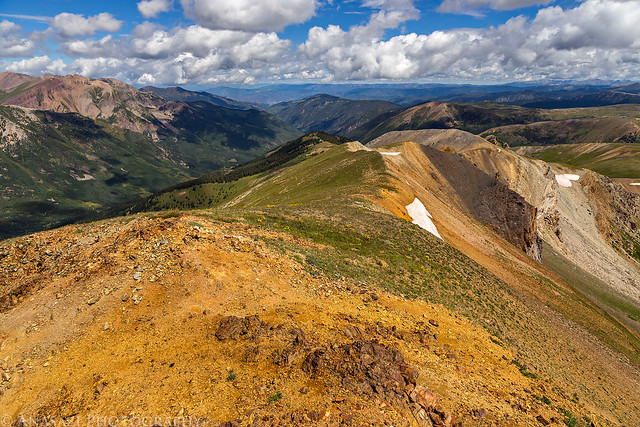 This is the route I ended up following below the rocky spine of the ridge. I basically followed transition between the loose talus and the solid rock that was above. It looks steeper than it actually was. 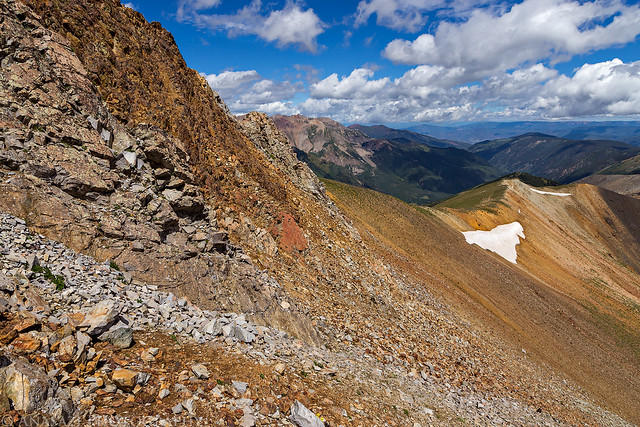 View from the summit of Taylor Peak. You can see Taylor Pass, my starting point, in the upper right. 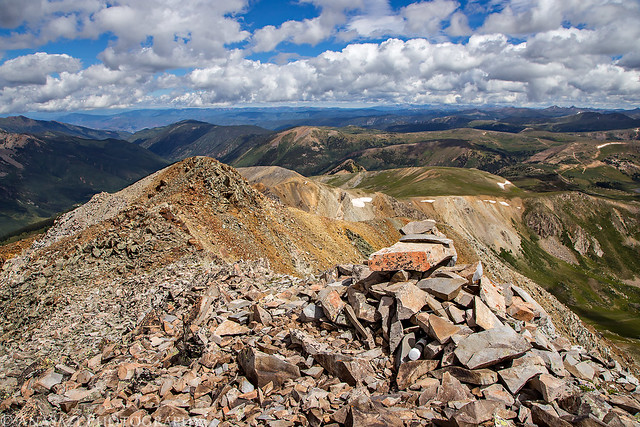 Looking across to Star Peak (13,521). There were some dark clouds moving in, so I didn’t stick around on the summit too long. 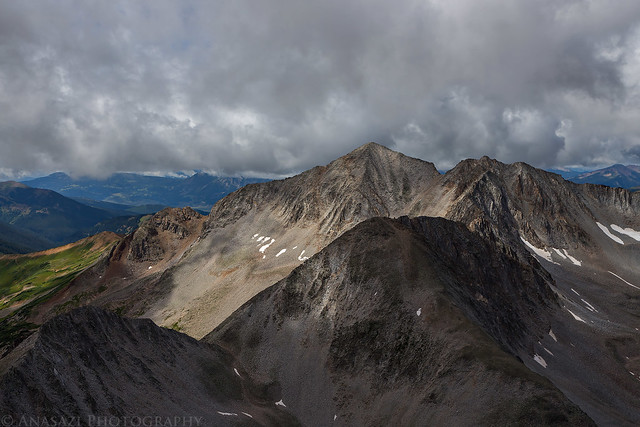 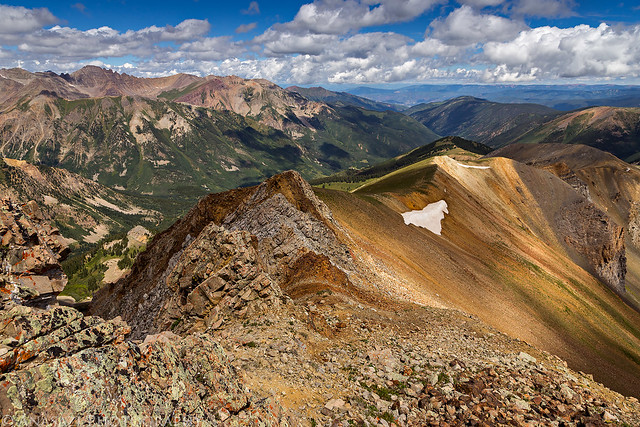 On my way back down I climbed up to the summit of an unnamed 13,060 peak that I had bypassed on the way up. 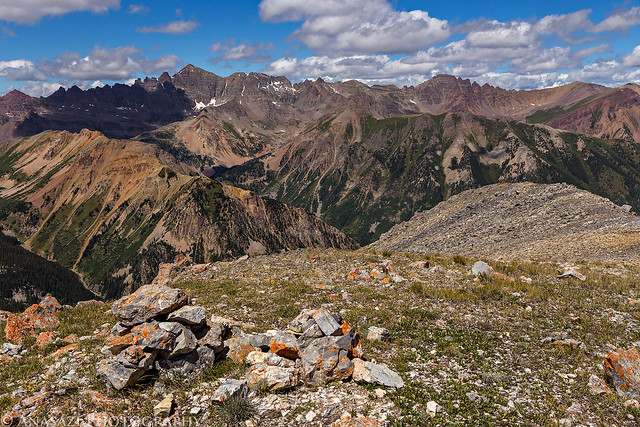 Looking down into the Castle Creek drainage with the top of Richmond Hill in the upper right. 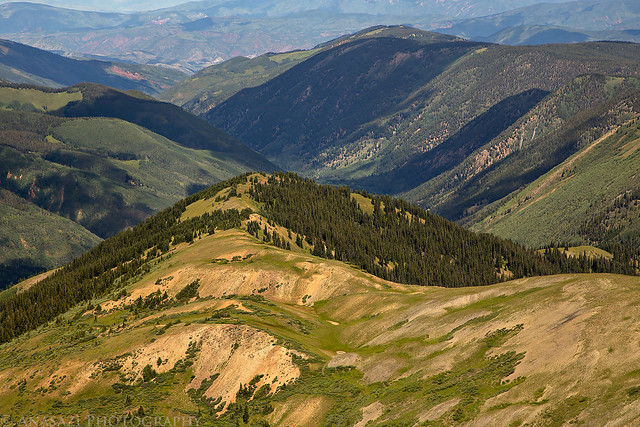 Another view of Taylor Peak from along the ridge as I hiked back down to the pass. 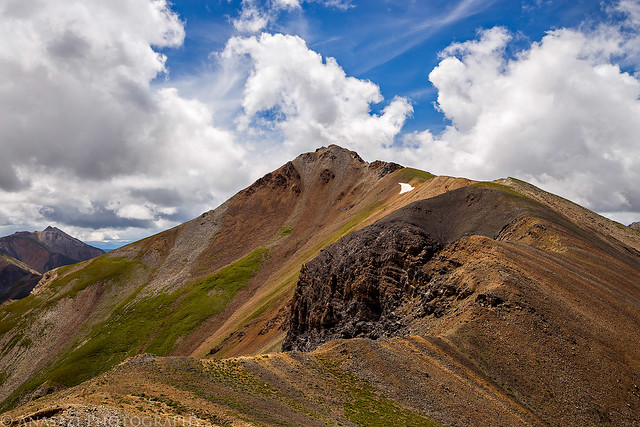 There were great views of Castle Peak (14,265) and Conundrum Peak (14,060) for most of the hike. I was really looking forward to climbing them on Sunday. In the lower left hand corner of the photo is Greg Mace Peak (12,528). 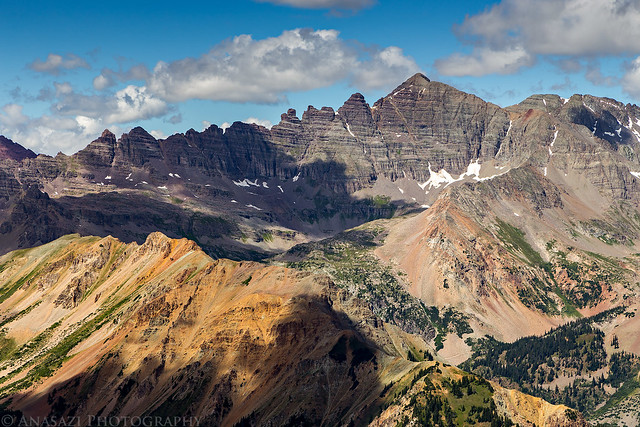 A nice view of Grizzly Peak (13,988) in the distance which is only twelve feet short of being a 14er and the highest 13er. 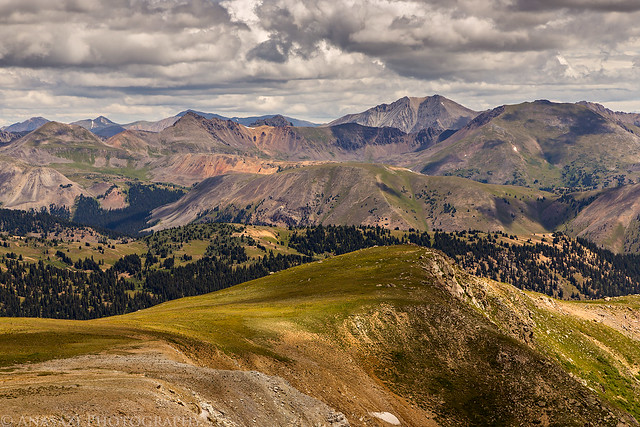 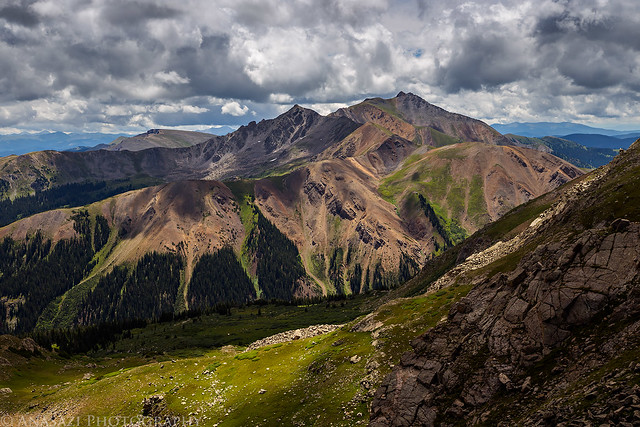 On my way up I had noticed an old mining structure in the alpine tundra and took a short detour to visit it on the way back down. 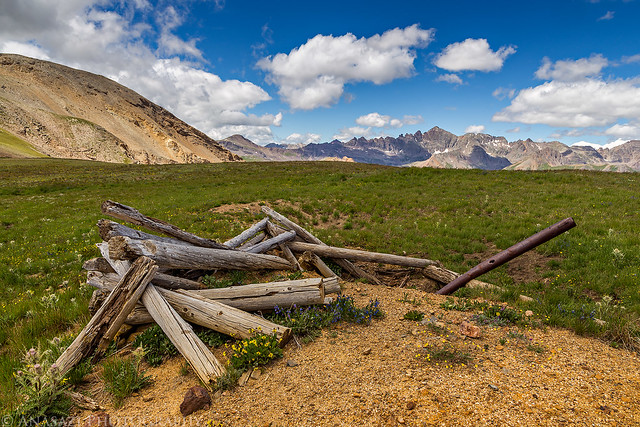 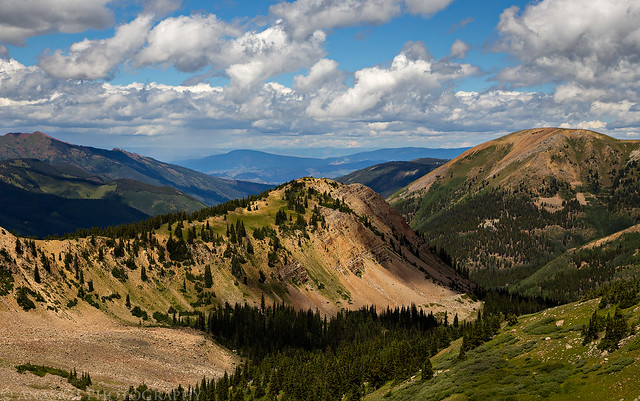 When I made it back to my Jeep at the pass I ate a late lunch and then drove over to the Pearl Pass Road so I could drive up into Montezuma Basin. Not only did I want to scout the upper part of the road for the following morning when I would be driving it in the dark, but I also needed to find a campsite closer to the top. I ended up finding a nice site near treeline and setup my camp before continuing to the end of the road just past the old Montezuma Mine.

A different view of Taylor Peak from Montezuma Basin. 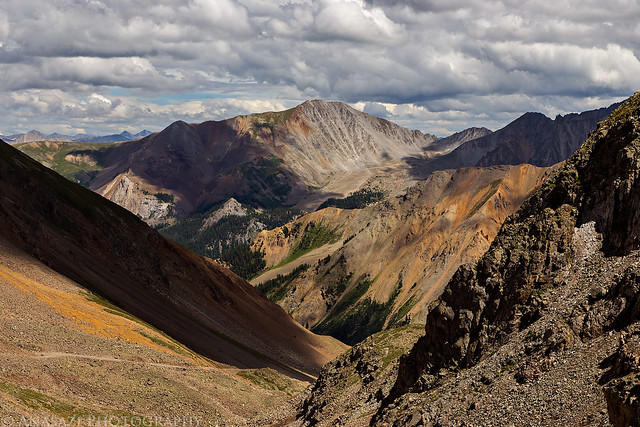 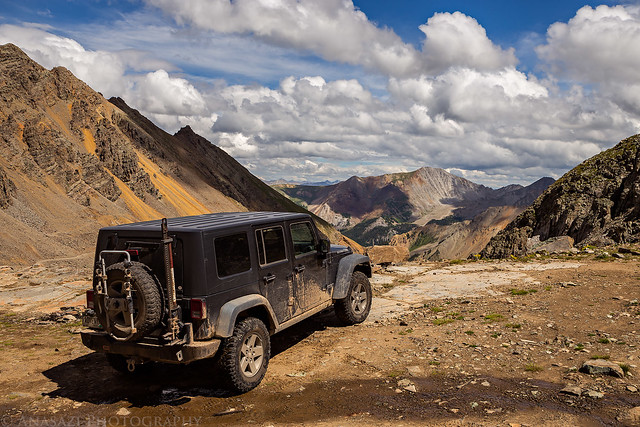 Driving back down to my camp at treeline. 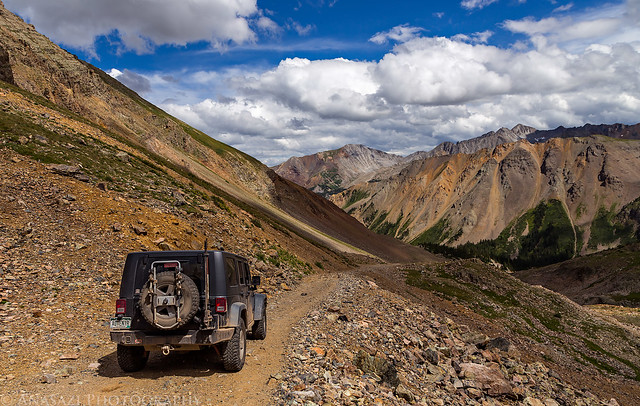 After returning to camp I noticed I had a slight headache and was feeling a bit nauseous, which I attributed to slight dehydration and needing to eat something. I made sure to drink plenty of water and had dinner, but the nausea never went away. After reading for a while and laying down hoping that it would pass, I finally decided that I was probably feeling this way because of altitude sickness (acute mountain sickness). The only way to know for sure was to head back down. At about 7:30pm I reluctantly decided to pack up my camp and head down to a lower elevation since I was alone and was worried things could get worse. Thankfully it only takes me a few minutes to pack up camp, so I made it back to Aspen before it was completely dark out. After I dropped below 10,000 feet I started to feel fine again, the nausea went away and my headache disappeared. I’m pretty positive that I had experienced altitude sickness for the first time. I sure hope it doesn’t happen to me again since I’ve still got a lot of mountains to climb! Since it was late I didn’t want to try and find a new campsite and I was still a little worried about the altitude sickness coming back, so I decided my best action for the night would be to drive home and come back to try these fourteeners another day.