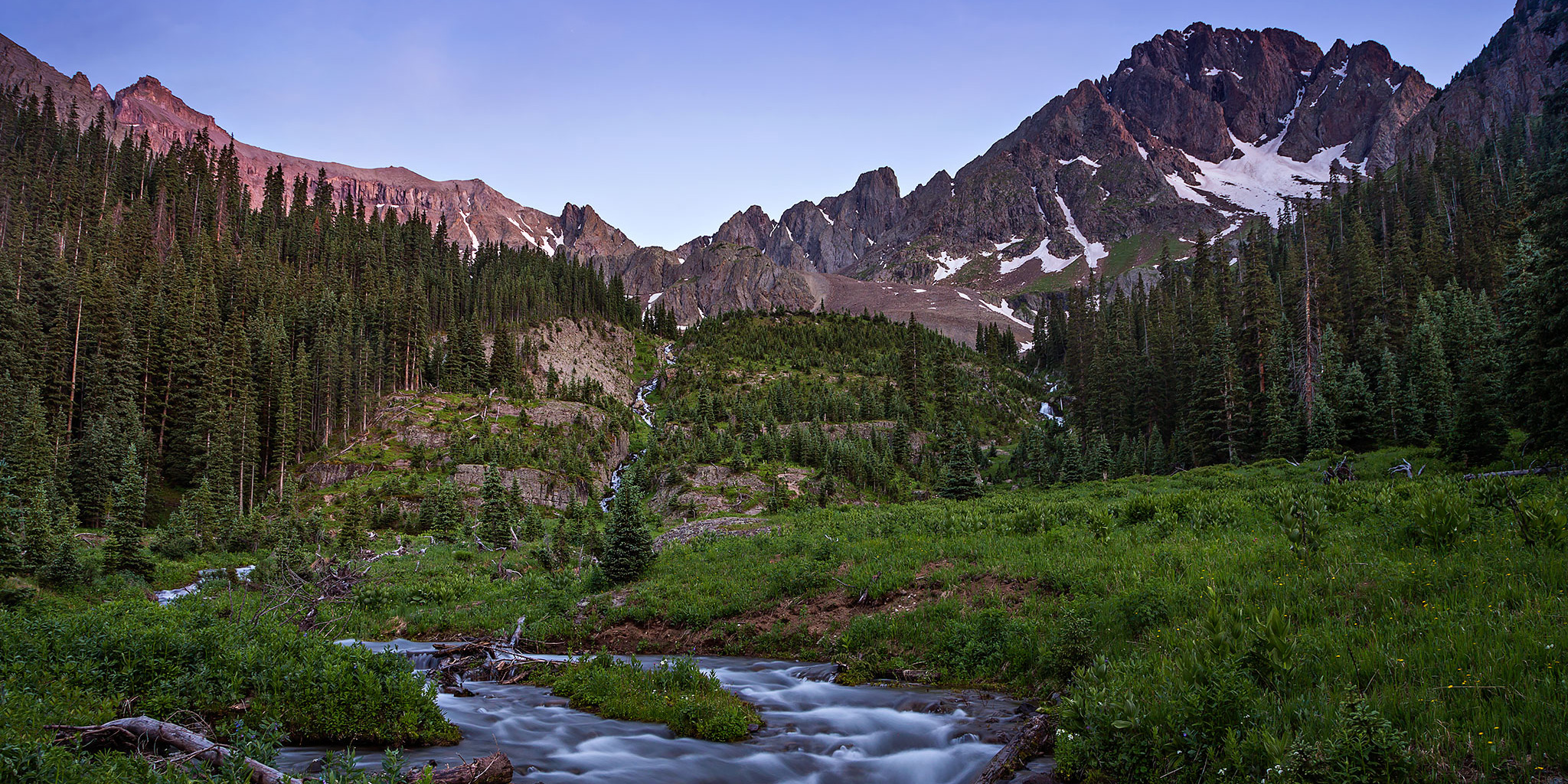 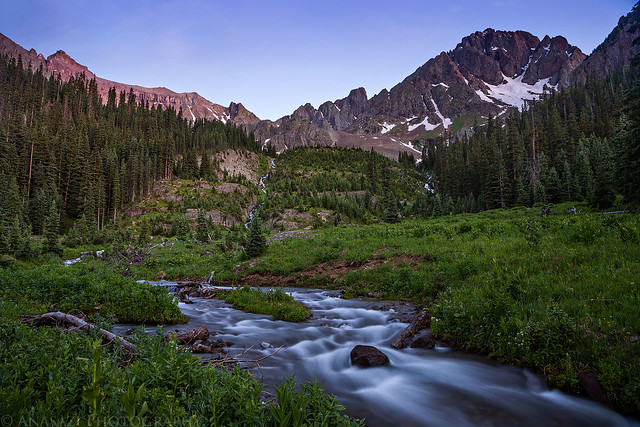 Since Diane and I won’t be able to get back into the outdoors for the rest of the month I wanted to do a quick and easy overnight backpacking trip in the mountains this weekend. I was looking for something close to home that wouldn’t be crowded and thought that Blaine Basin in the Sneffels Range of the San Juan Mountains would be a good option. We left home later than usual on Saturday morning and arrived at the Blue Lakes Trailhead around 11am. I was blown away by how many vehicles were at the trailhead! It was crazy! There were cars lined up and down the road pulled over any place they could find to park. At this point I was second guessing the trip because I wasn’t convinced that all of these people were headed to the Blue Lakes?

After finding a place to park about a quarter mile from the actual trailhead we shouldered our backpacks and started the climb up to Blaine Basin. The trail quickly branches off from the Blue Lakes Trail and follows the easy Dallas Trail to Wilson Creek. After crossing Wilson Creek on a crudely-constructed log bridge we followed the creek as it climbed up into lower Blaine Basin. It was a pretty good trail with a couple more creek crossings before it got rocky and steep for the final climb to the basin. We passed a single person coming down this section of the trail and ran into one pair of people in the lower basin who left shortly after we arrived. That’s all the people we would see for the rest of the weekend. I guess this basin was a good location to get away from the crowds and we had it all to ourselves. While there are no lakes in this particular basin, there are a lot of streams and waterfalls all around. The sound of rushing water was constant in the basin.

Blaine Basin- our destination for the weekend. 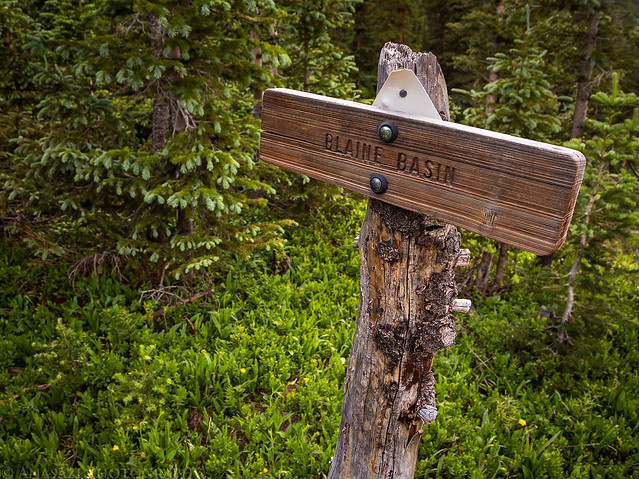 Cow Parsnip along the trail. 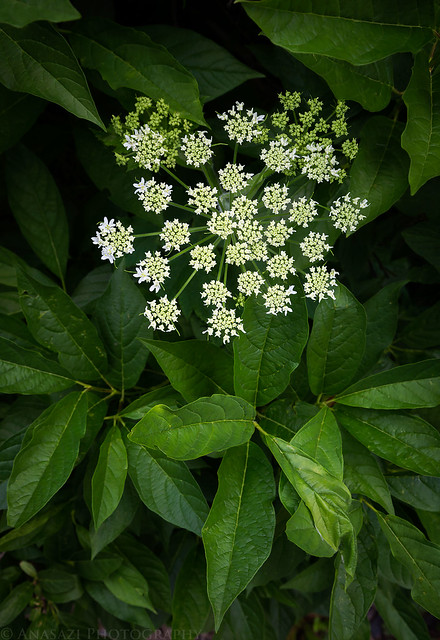 We found an very nice campsite at the edge of the trees near a rushing waterfall in the lower basin, setup camp and relaxed for a few hours. 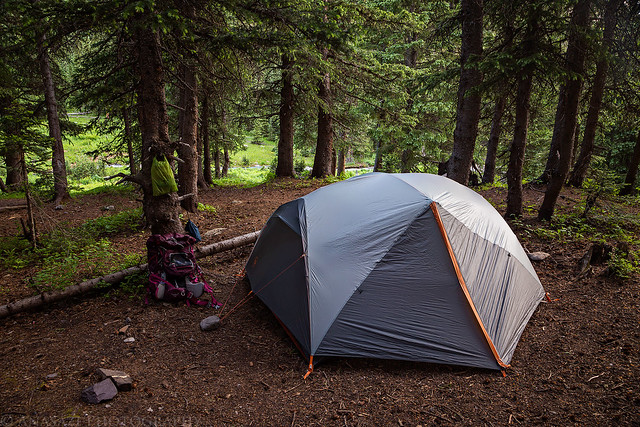 A large rushing waterfall behind camp that provided nice white noise to fall asleep to. 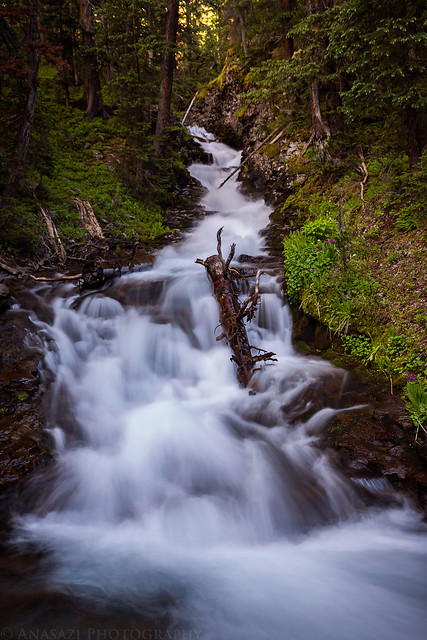 Later in the evening we hiked to the upper basin at the base of Mount Sneffels and then returned to camp for dinner and to take a few photos at sunset.

Following the trail up higher into upper Blaine Basin. 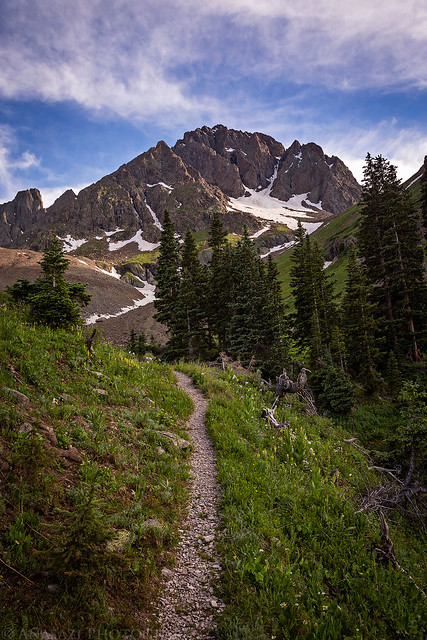 Diane sits on a large boulder under Mount Sneffels and takes in the views. 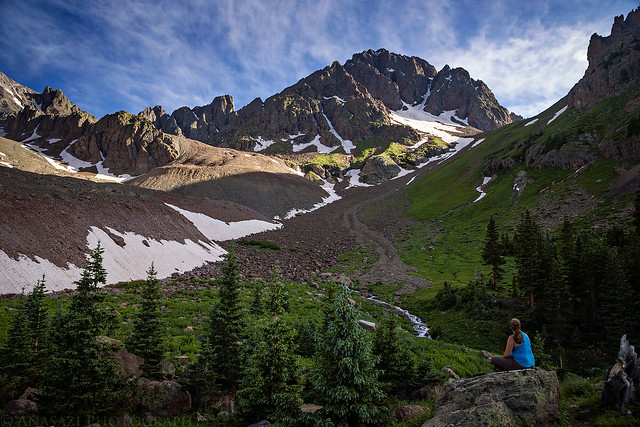 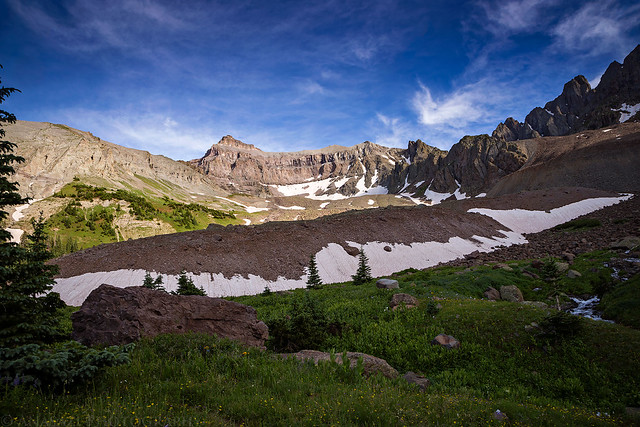 Following the creek back down into lower Blaine Basin. 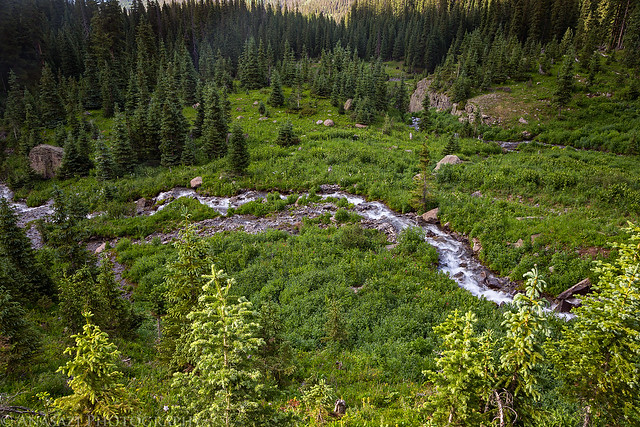 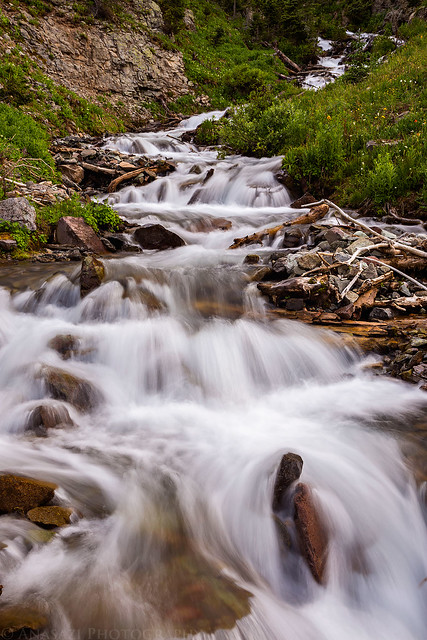 While the wildflowers weren’t abundant at this time, there were still plenty around. 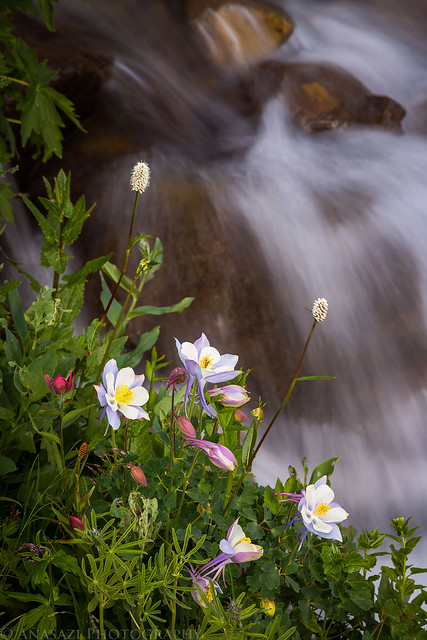 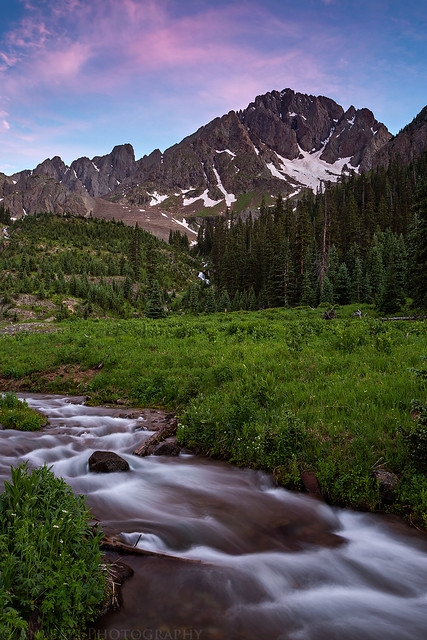 A touch of alpenglow on Cirque Mountain from near camp.

After the sun was down and the last bit of light was gone we got into the tent and went to bed. The temperature was perfect and night was pretty calm. We slept well. I woke up early on Sunday morning to photograph the sunrise. I was hoping to at least catch a little alpenglow on Mount Sneffels, but I wouldn’t even see that. 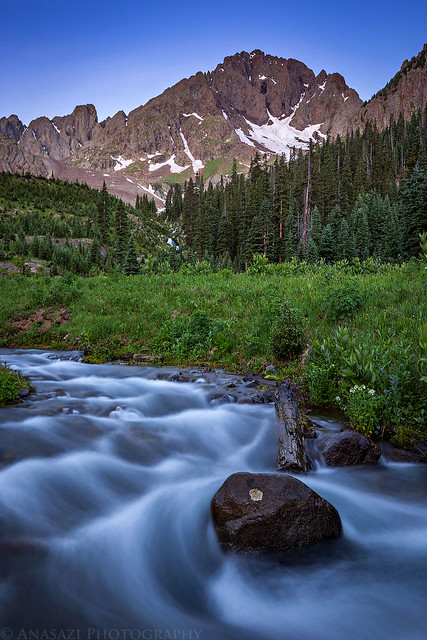 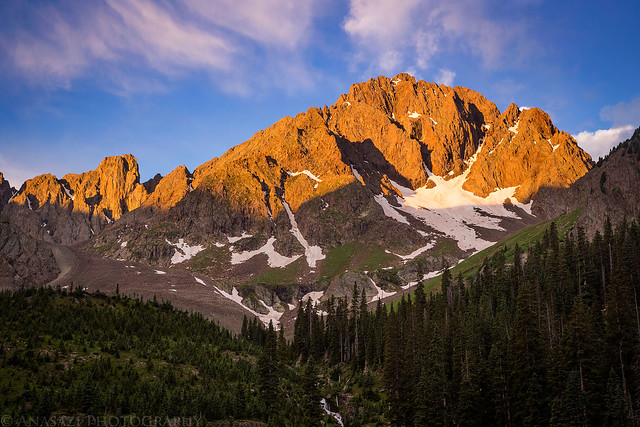 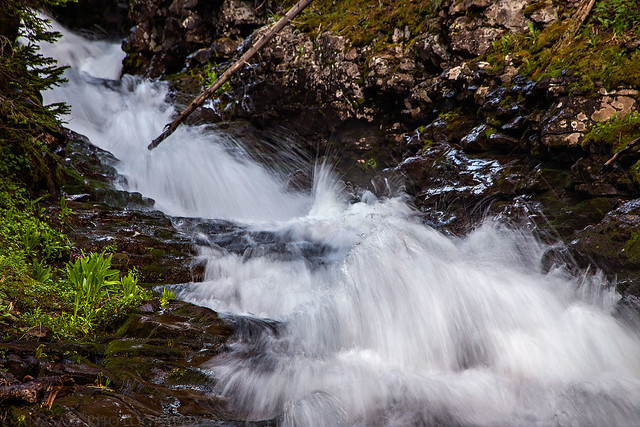 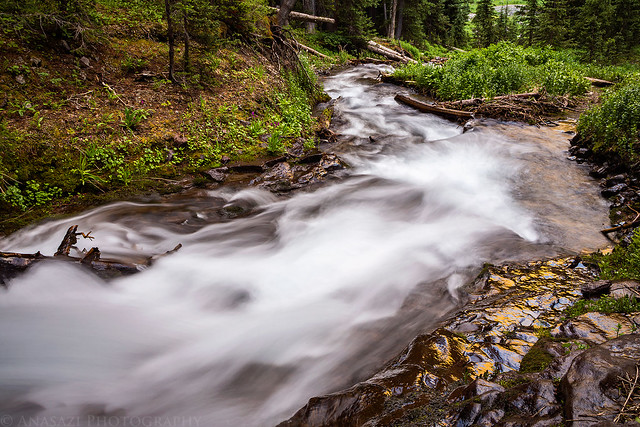 Morning light on Blaine Peak (12,940). I had hoped to climb this peak the previous afternoon, but one of my knees was bothering me and I decided it probably wasn’t a good idea. Hopefully next time… 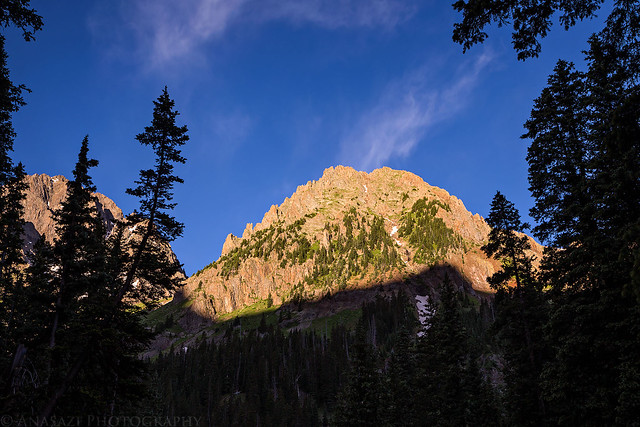 Diane hikes back down the trail ahead of me. 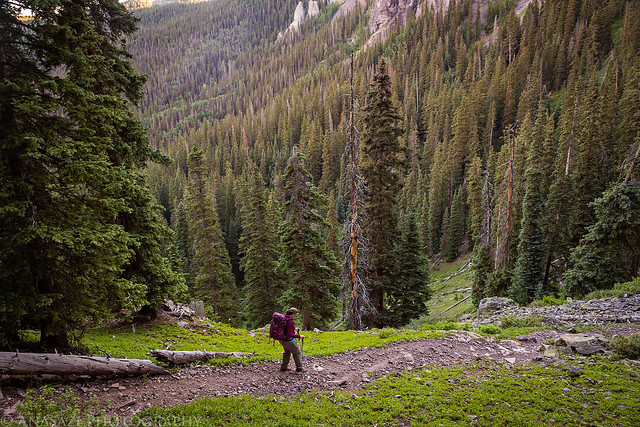 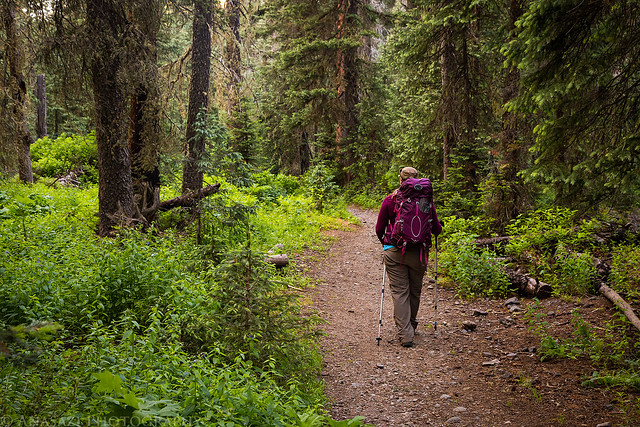 Hiking along a bend in Wilson Creek. 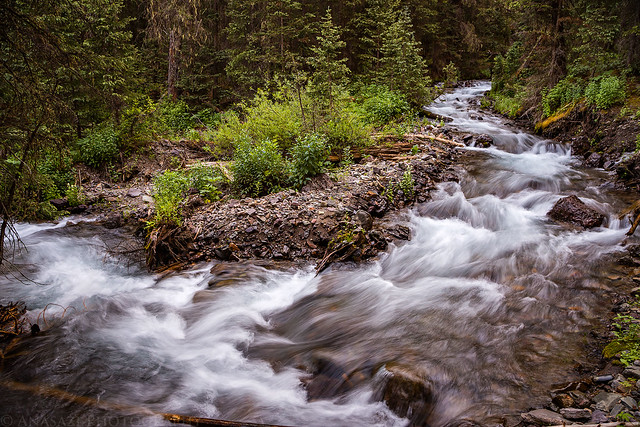 This was the trickiest log to cross on the trail. 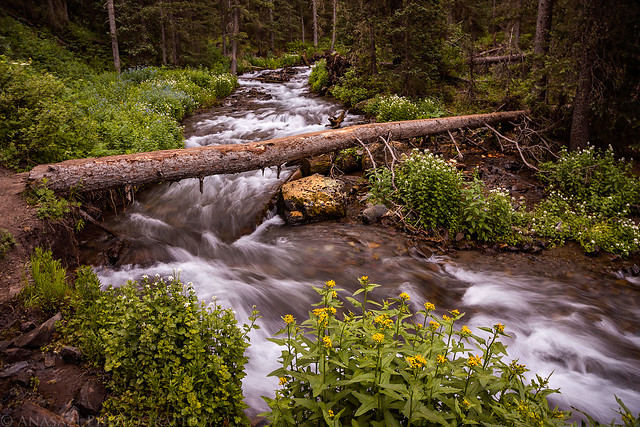 Diane on the other side of an easy crossing. 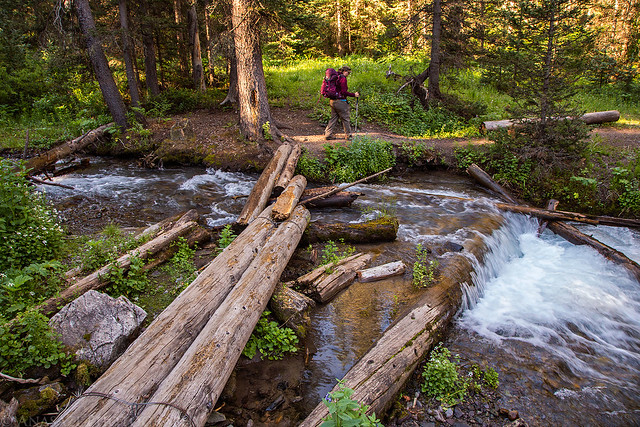 Since this is not a very popular trail, I am including our GPS track on the map below.