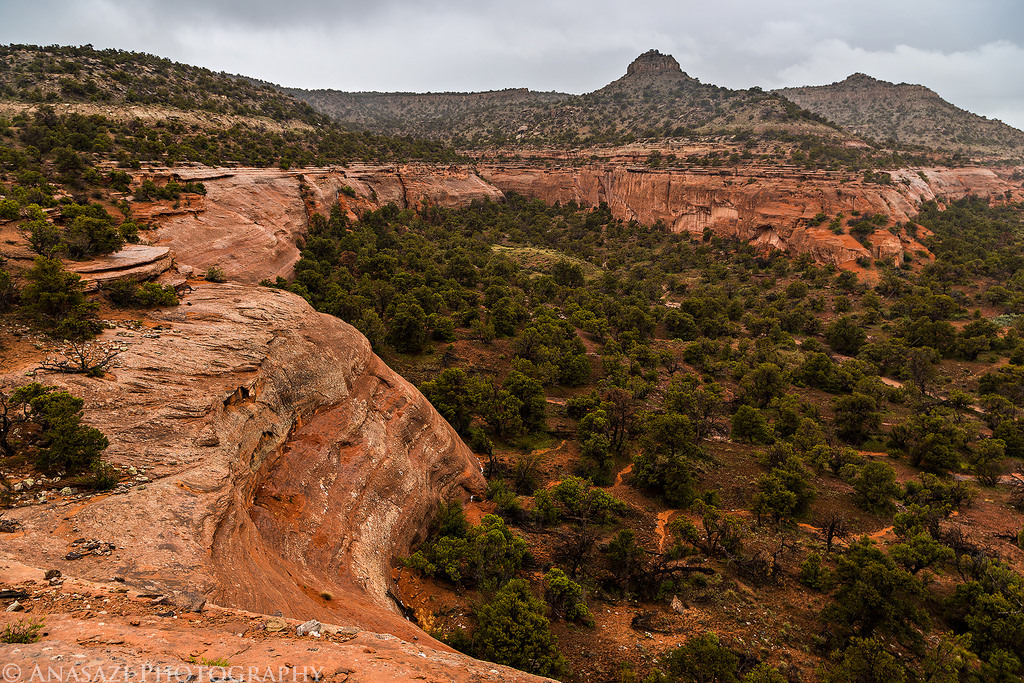 After getting some chores done around the house I happened to look outside in the afternoon and noticed that the sun had come out.  I checked the weather again and it looked like I might be able to get the hike in after all.  I drove back to the trailhead and started hiking up the Fruita Dugway trail.  The beginning was a little muddy in places from the rain that morning, but I soon left the mud behind for sand and rock.  I really wasn’t sure what to expect from this trail since I had never seen any good photos from this area, but I really ended up enjoying this hike.  I had seen part of the trail many times before from the Historic Trail overlook in the Colorado National Monument along Rim Rock Drive before, but had never put it high on my hiking list.  I think that was a mistake.

The original use of this historic trail was by Grand Valley and Glade Park ranchers who would drive their cattle up and down the trail to reach their winter and summer ranges. The trail was later improved in 1907 to help build the Fruita Pipeline which would bring clean drinking water from reservoirs on Pinon Mesa to the city of Fruita. Here’s an old photo of cattle on the portion of the trail visible from the overlook along the road. 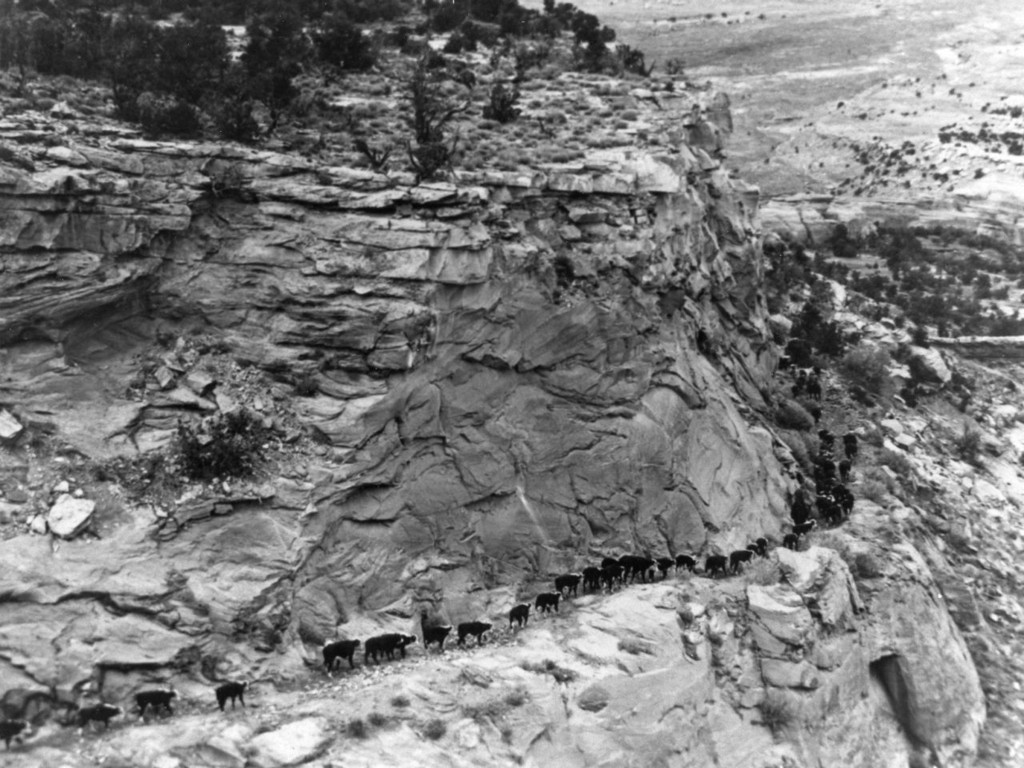 Here are some photos from my hike…

Following the trail towards Kodels Canyon. 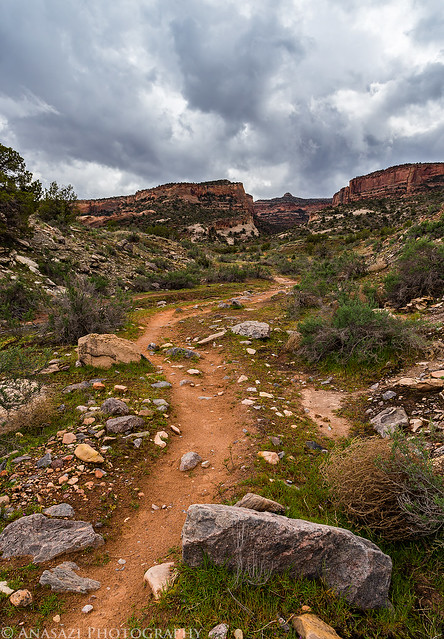 The steepest part of the trail climbing up towards the Monument. 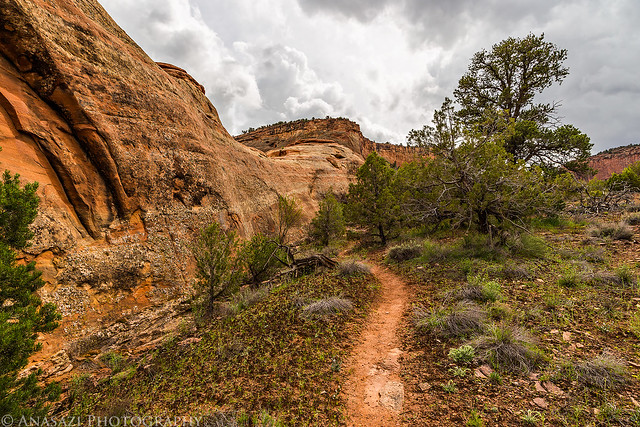 At the Colorado National Monument boundary. 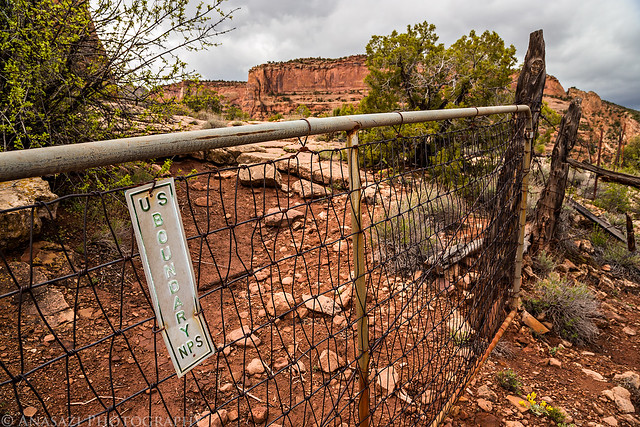 A beautiful view into Kodels Canyon from the trail. 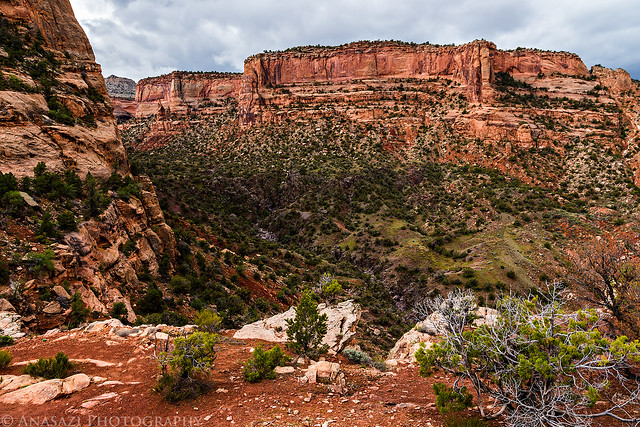 Following the trail along the ledge that is visible from the overlook along Rim Rock Drive. 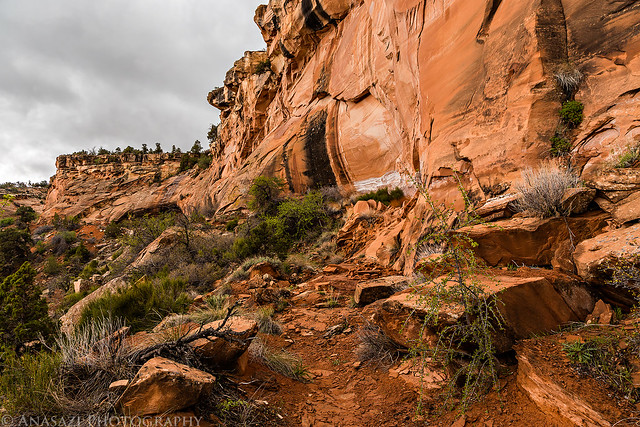 At about this time the rain and lightning started again so I found refuge in a large alcove to keep dry and wait out the storm.  I waited for a while and it didn’t seem like the rain would be letting up any time soon, so I put my camera away and put on my rain gear.  I took a few photos with my iPhone while I explored the remaining section of the trail that would meet up with Rim Rock Drive.  There was some interesting scenery around here and I’m looking forward to returning with my camera in better weather in the near future.  Here’s a few photos I took with my phone in the rain…

View down on Rim Rock Drive in the storm. 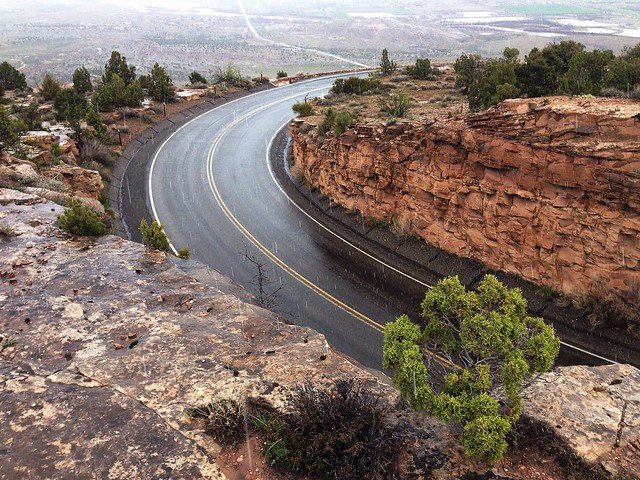 Tree in an alcove. 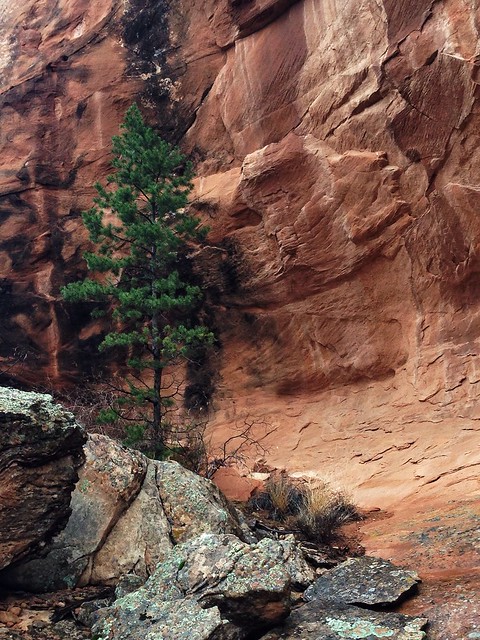 Rain in a shallow canyon. 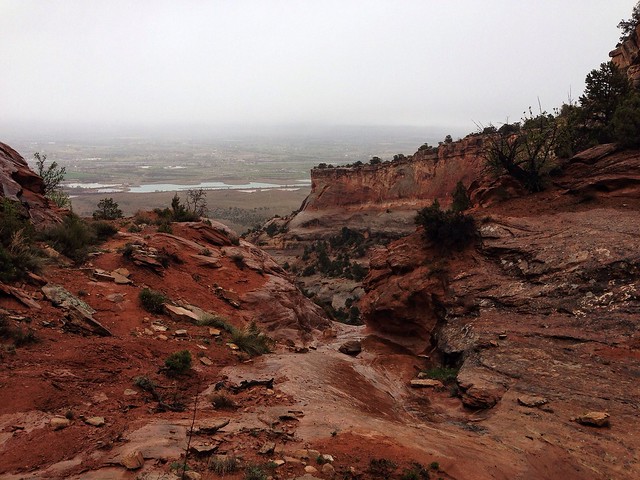 Rock fall along the old trail. 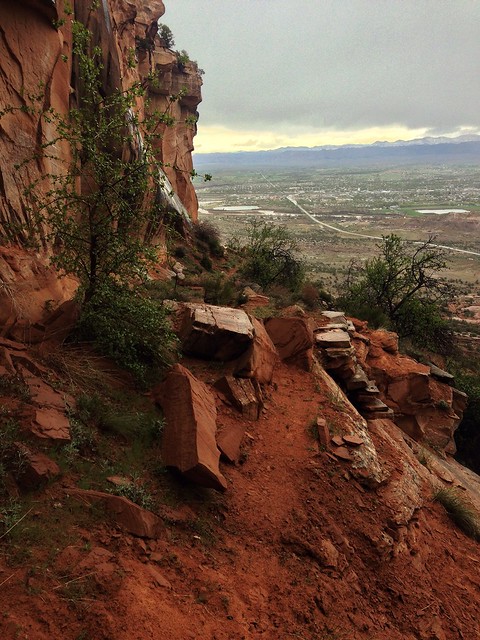 View of the alcove I waited out the storm in. 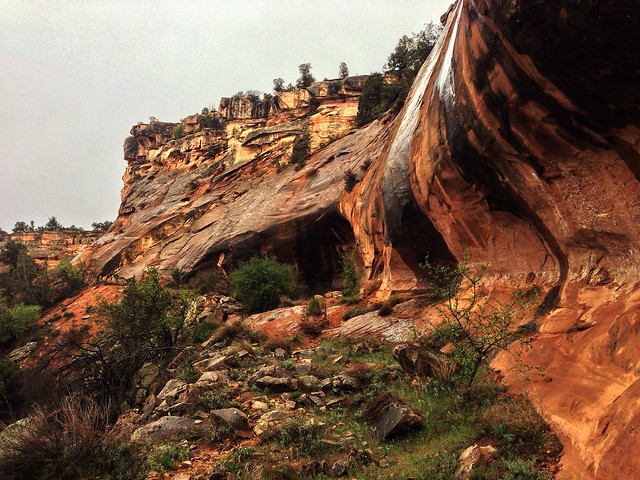 Hiking back down in the rain. 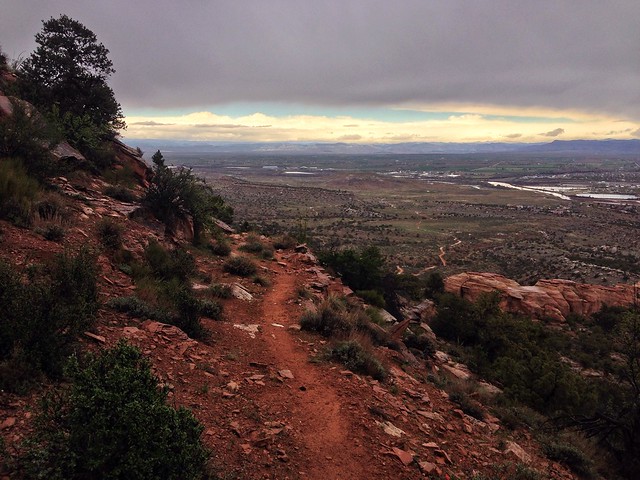 After meeting up with the road I decided to hike back down to the trailhead and come back another day when it wasn’t raining.  However, by the time I reached my Jeep at the bottom the rain had stopped again and I wanted to finish the trail.  I drove back up into the Monument to finish the trail from where it had met up with Rim Rock Drive.  As I neared the tunnels I was stopped by a large group of bighorn sheep crossing the road.  My camera was still in my backpack and it took me too long to get it out. By that time most of the sheep were too far away for a decent photo.  I did managed to get a couple of photos… 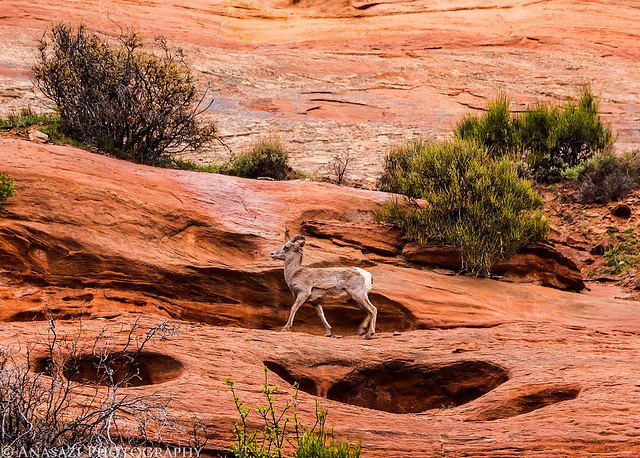 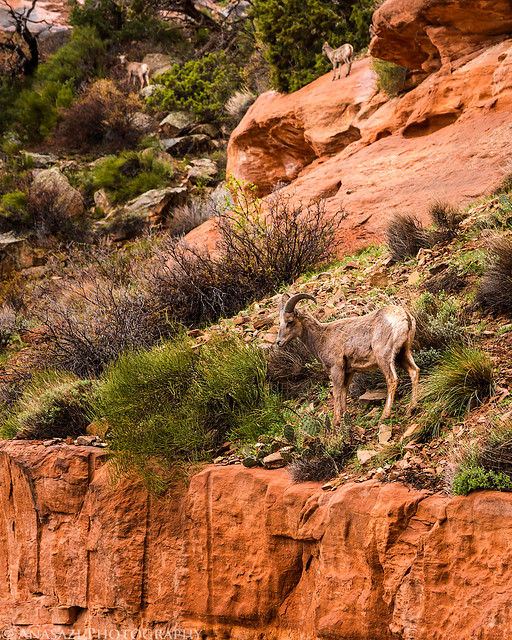 I parked along the road and started hiking the rest of the trail.  It figures that shortly after I started hiking again it started to snow.  It wasn’t enough to get me or my camera soaked this time, so I continued.

A great view over the upper reaches of Kodels Canyon.  I’m going to have to come back to this area when the light is better and it’s not snowing. 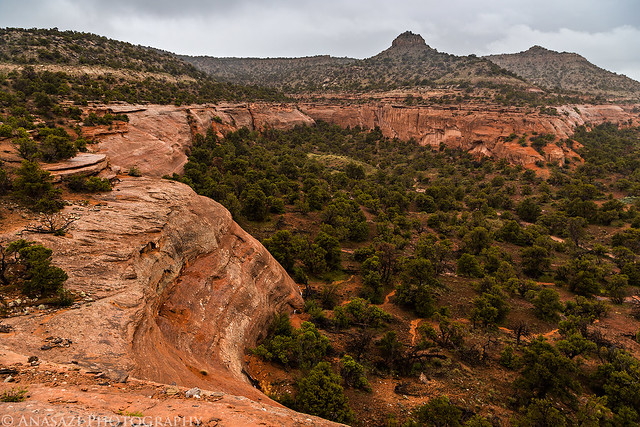 A snowstorm obscures the view. 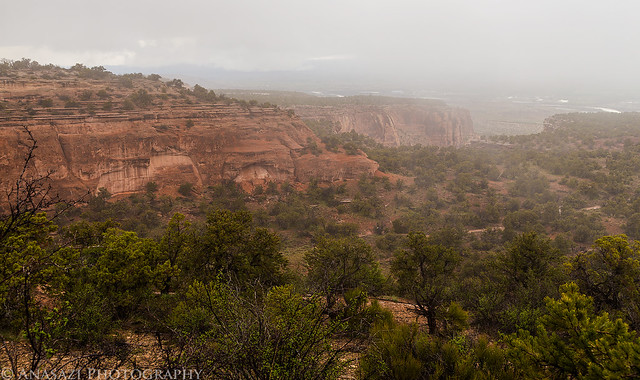 A cool sandstone shelf section of the old route. 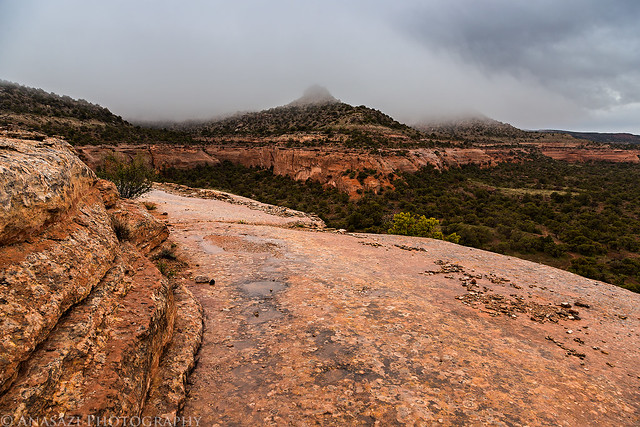 This is definitely a hike I am going to have to return to in better weather.  Even with the rain and snow, I still had a great time today!