The Faces of Canyonlands

Aside from the archaic pictographs found on the Colorado Plateau, such as Barrier Canyon Style and Grand Canyon Polychrome, the Faces Motif which are found in a small region of the Needles District of Canyonlands National Park are some of my favorite rock art panels to find and visit. The ‘Faces’ primarily occur as polychrome paintings and this particular style is distinguished by rows of flat-topped heads resting on broad-shouldered torsos including masklike facial features, elaborate necklaces, chest decorations and kiltlike garments. These pictographs look similar to clay and stone figurines excavated from Fremont sites within the same general region.

Below are a few photos of the Faces Pictographs that I have photographed over the years. 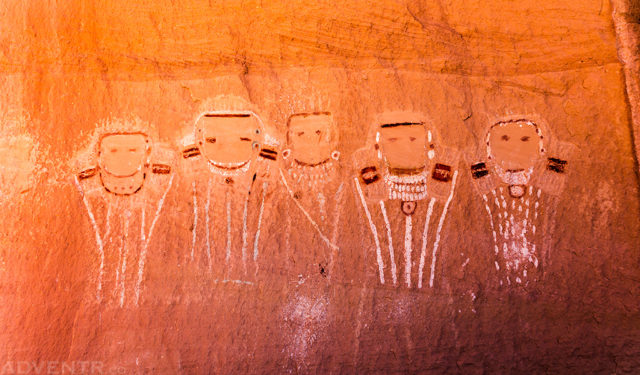 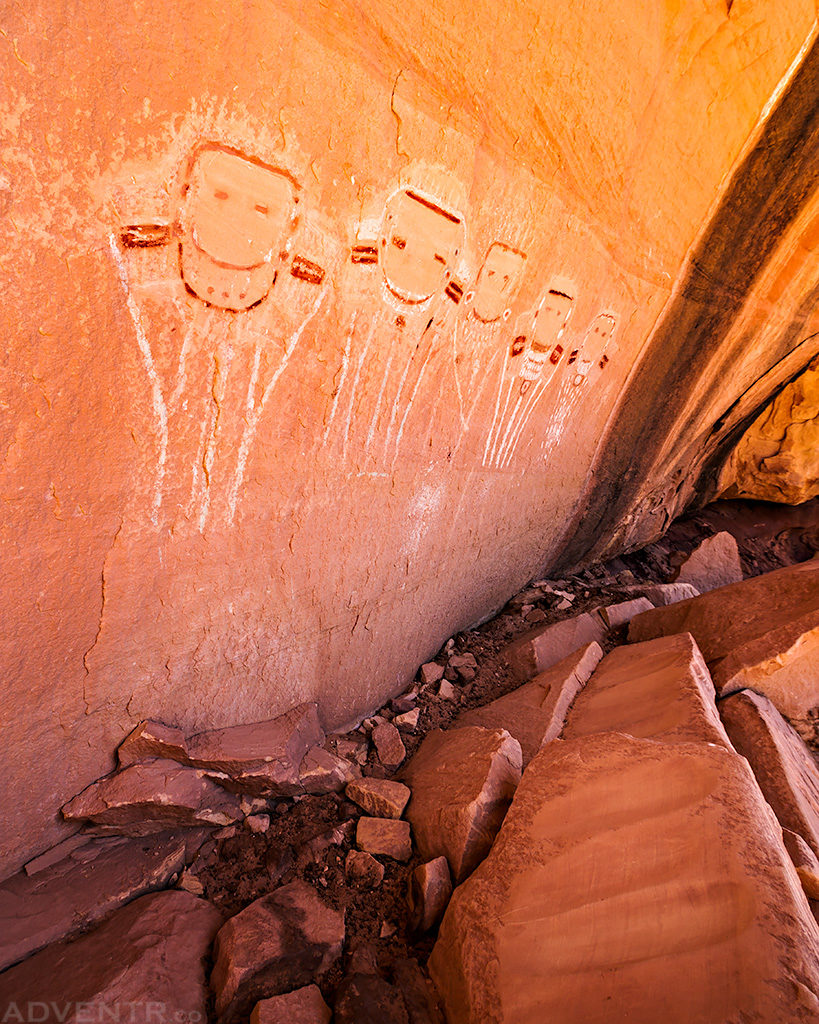 Below the Five Faces is a long sandstone slab lined with metate grooves. 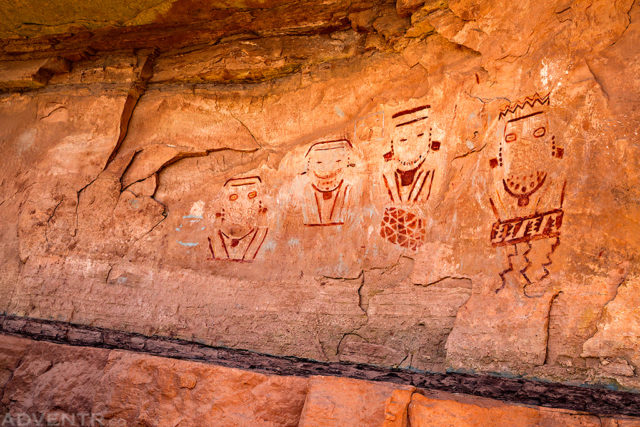 The well-known Four Faces panel is definitely a favorite of mine. 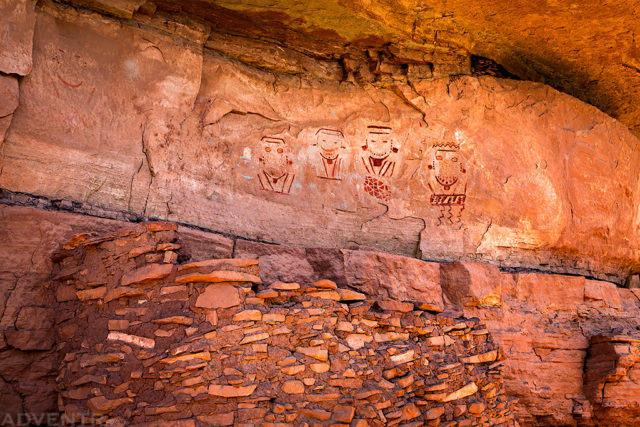 Here’s a wider view of the Four Faces showing how they are painted above a ruin. 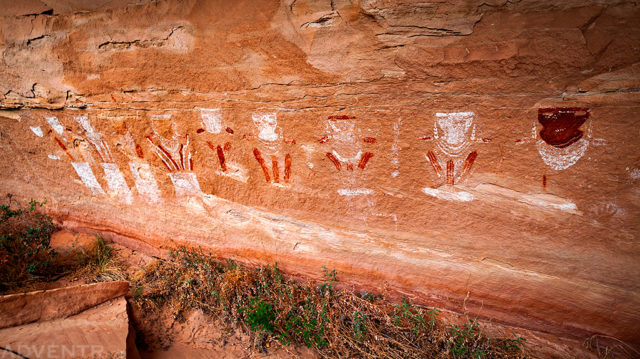 Even though this panel is called the Thirteen Faces, only about ten of them are actually still visible. I can’t recall ever seeing a photo showing all thirteen faces, so I’m not sure how long they have been gone? 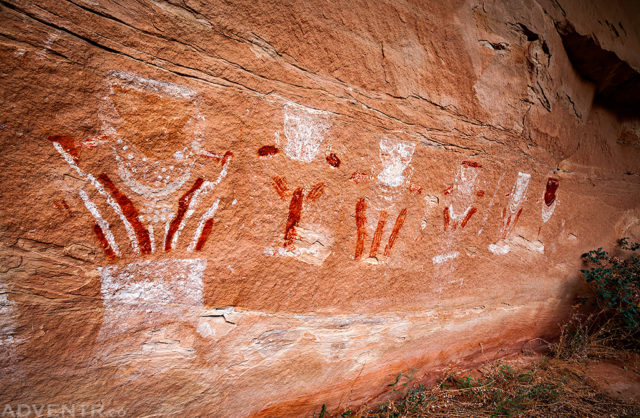 Here’s a closer look at one of the more detailed figures in the middle and the right side of the panel. 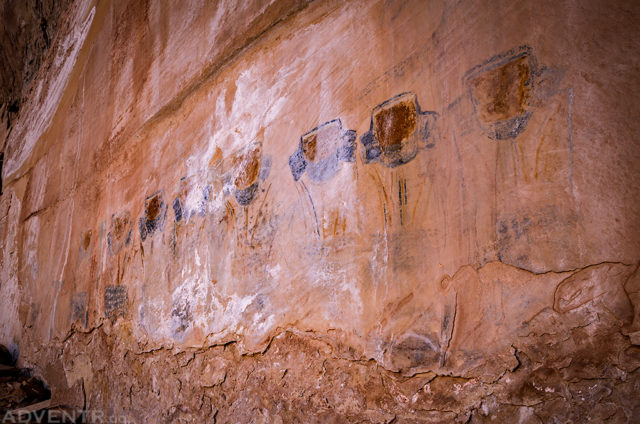 The Eleven Faces panel only has about eight faces that are really still visible today, although you can find some faint traces of the remaining three faces that are now missing. Unfortunately, calcite has been leaching from the sandstone that these pictographs were painted on, so many of them have been covered in the white substance. 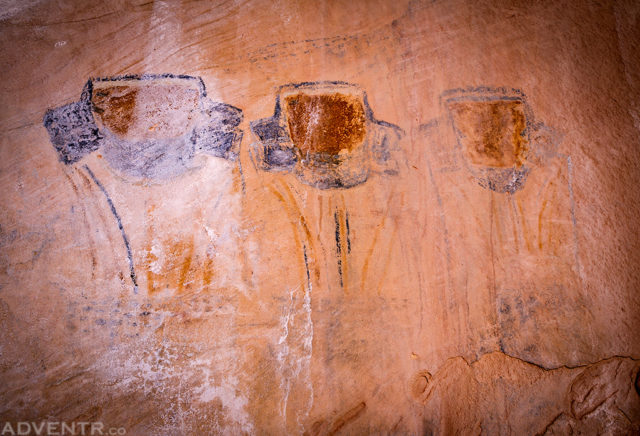 A closer look at the three figures on the right side of the panel.

Unlike the other Faces panels, the ghostly Nine Faces are all white with no other colors. There are still nine of them visible though! 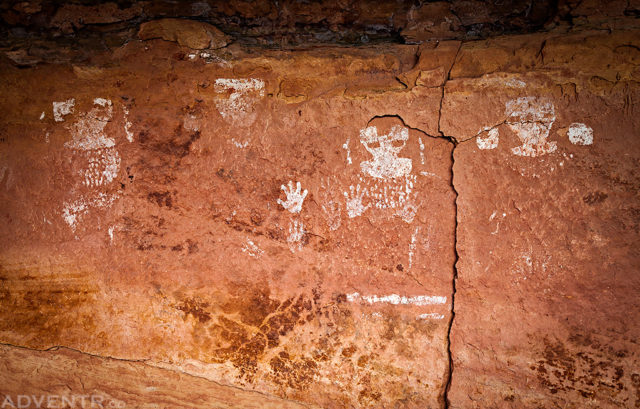 A closer look at the four figures on the right side. 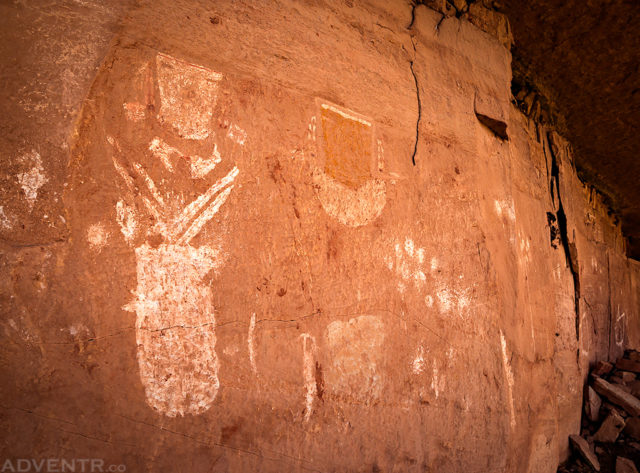 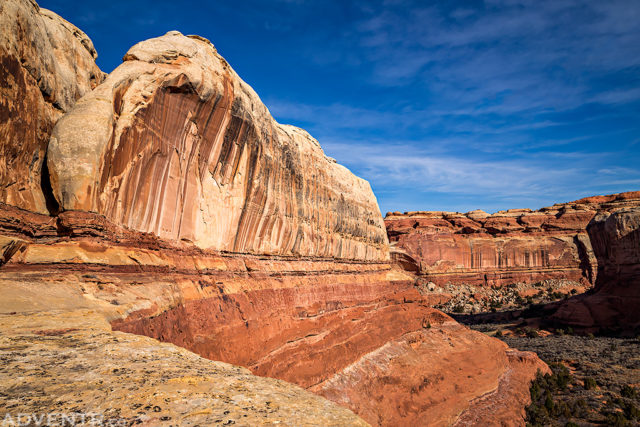 I know the Faces in this photo are small and hard to see, but if you look closely you can see their precarious location. 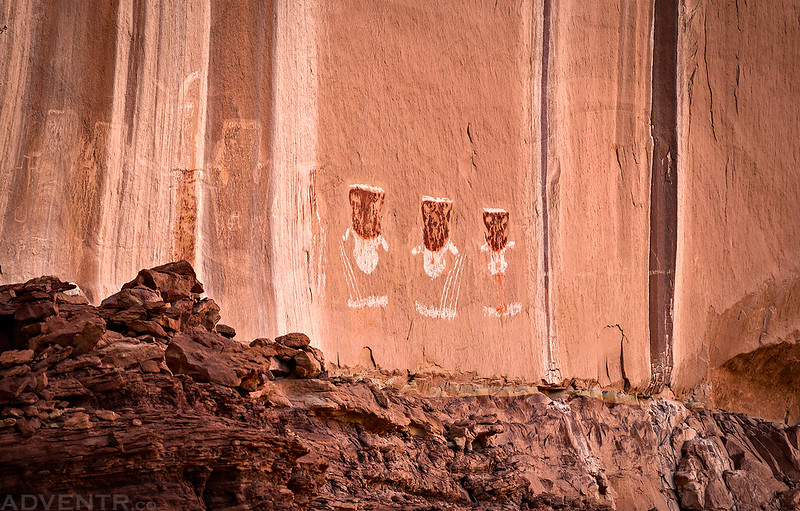 I was unable to get onto the ledge in front of these pictographs since it required climbing skills I don’t possess along with massive exposure below, so this is a photo zoomed in and cropped for a better look at the pictographs. 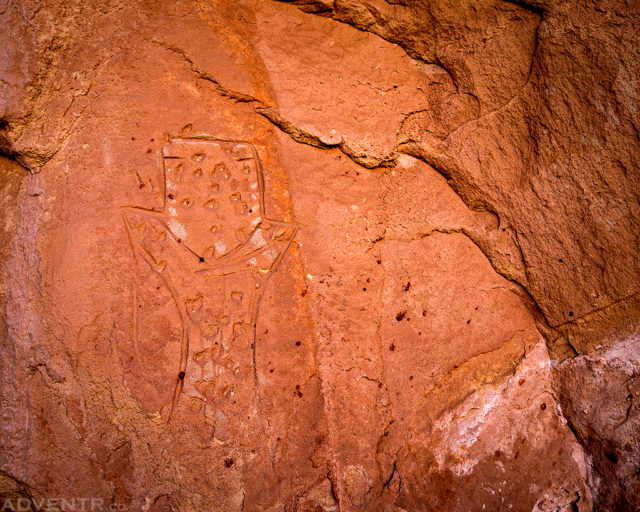 So far this is the only petroglyph I have found that seems to match the Faces Motif. Although, if you look closely you can see there is some remaining pigment on the sandstone, so perhaps this carved petroglyph was once painted, too? 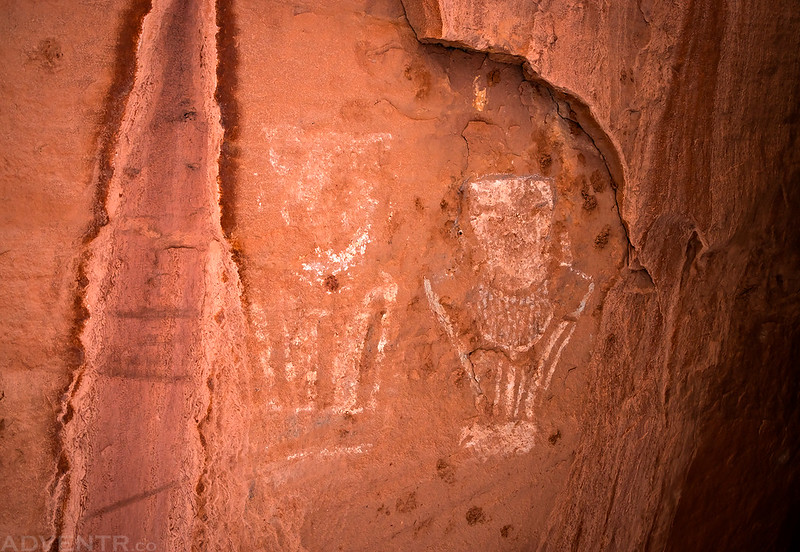 While exploring new parts of Salt Creek Canyon I came across these two white faces painted underneath a large fallen slab of sandstone in a small side canyon. I had never seen a photo of these before or heard about them, so it was a pleasant surprise when I came across them! 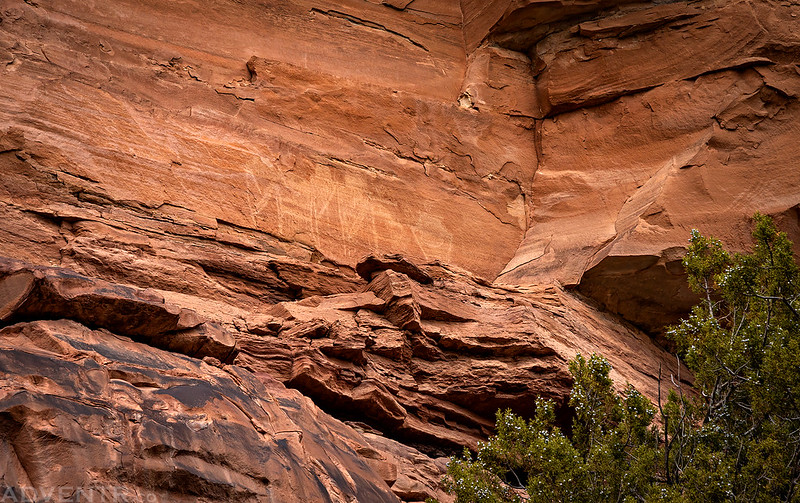 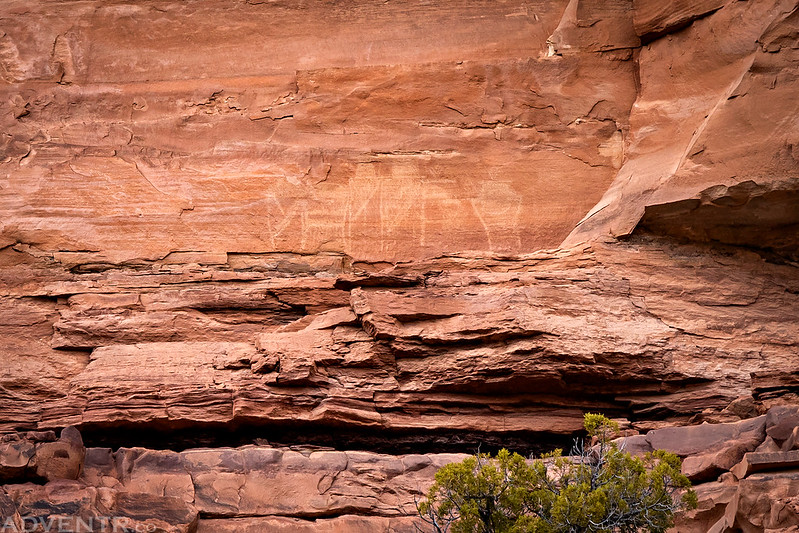 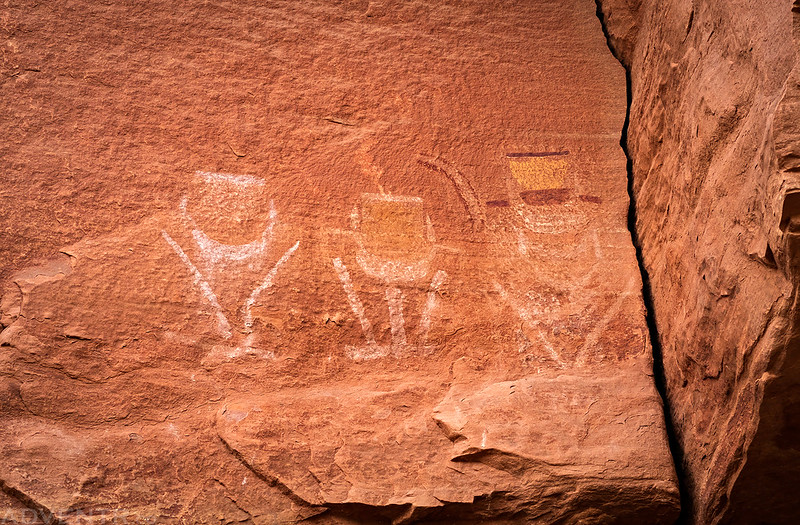 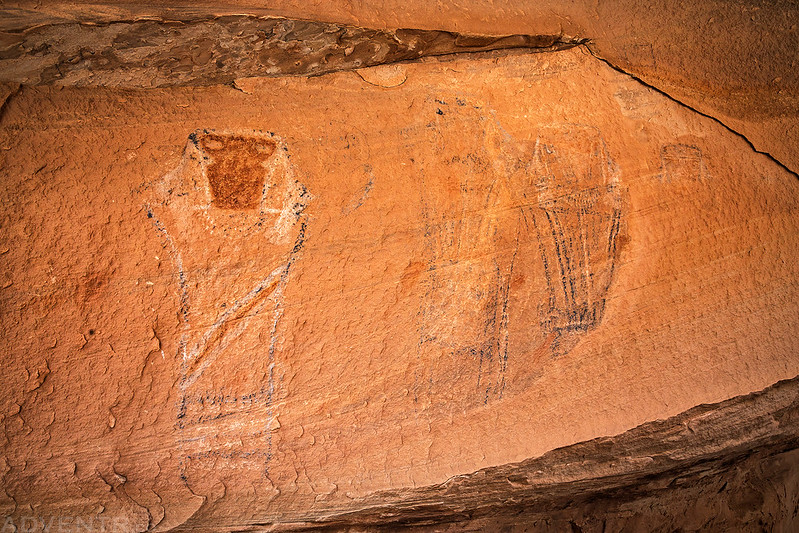 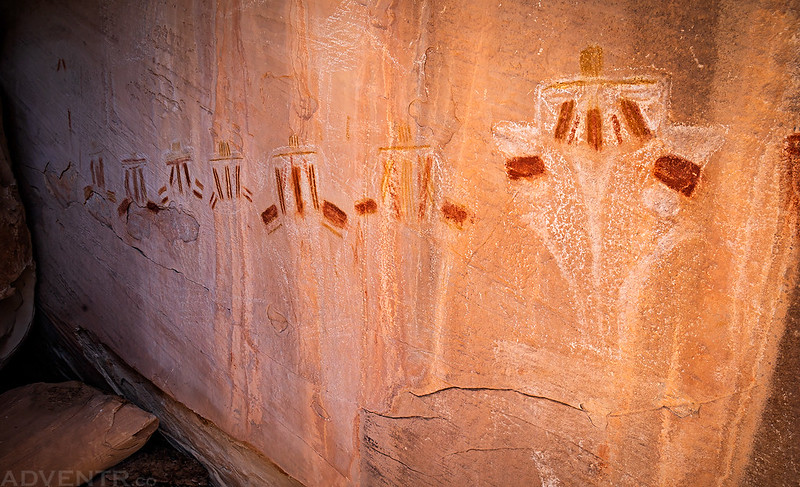 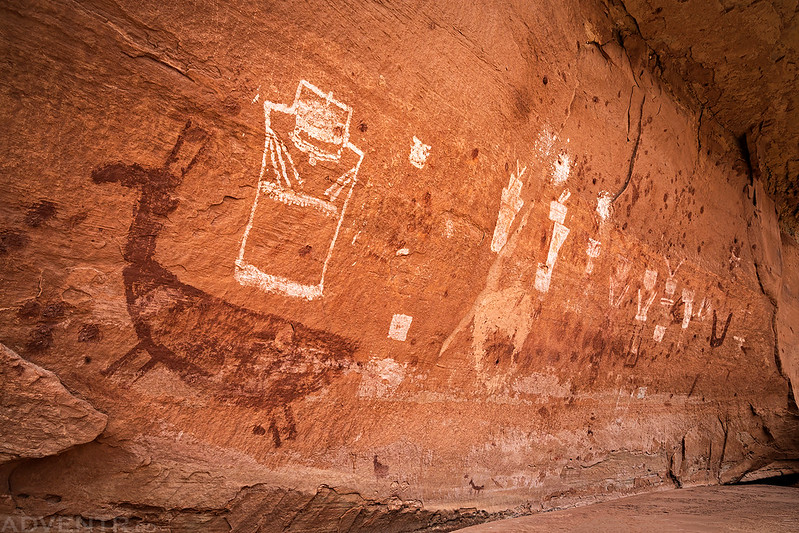 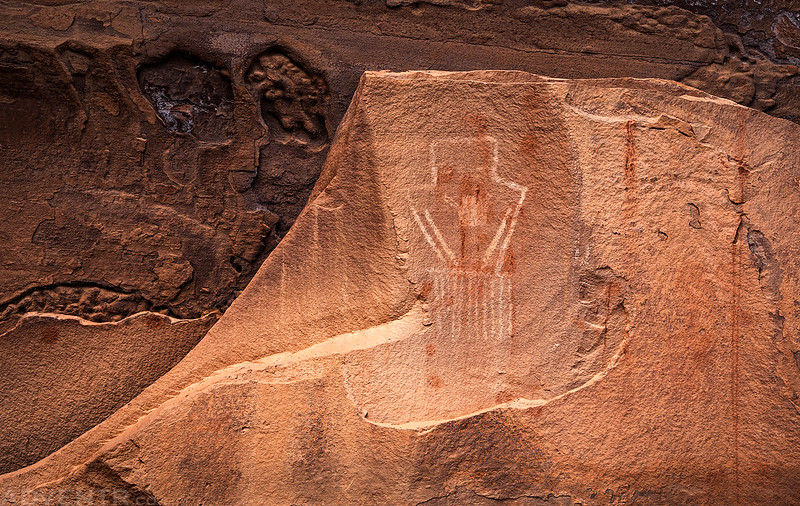