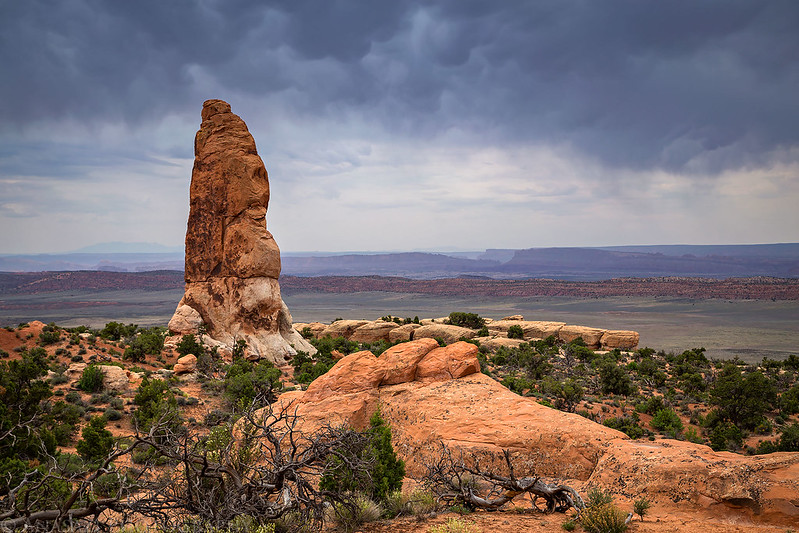 A nice view of Dark Angel from the Devil’s Garden section of Arches National Park.

We woke up early on Saturday morning and drove into Utah to the Yellow Cat Flat area where we parked at the boundary of Arches National Park. From there we followed a shallow unnamed wash and canyon into the heart of the Devil’s Garden. There were some minor obstacles and route-finding involved, but overall it was a pretty easy hike with a couple hundered feet of elevation gain. We visited a few arches, checked out some rock art and found a few historic inscriptions along the way. The weather forecast for the day was calling for a small chance of thunderstorms and temperatures in the mid-eighties, but with the heavy cloud cover it did not feel that warm out, though it was more humid out than we are used to. Though I had only anticipated hiking seven or eight miles, our total for the day was over eleven miles.

Hiking into Devil’s Garden from Yellow Cat Flat up the shallow wash wasn’t too difficult, but since we were hiking across the fins we had to find ways around or across a number of joints and slots. 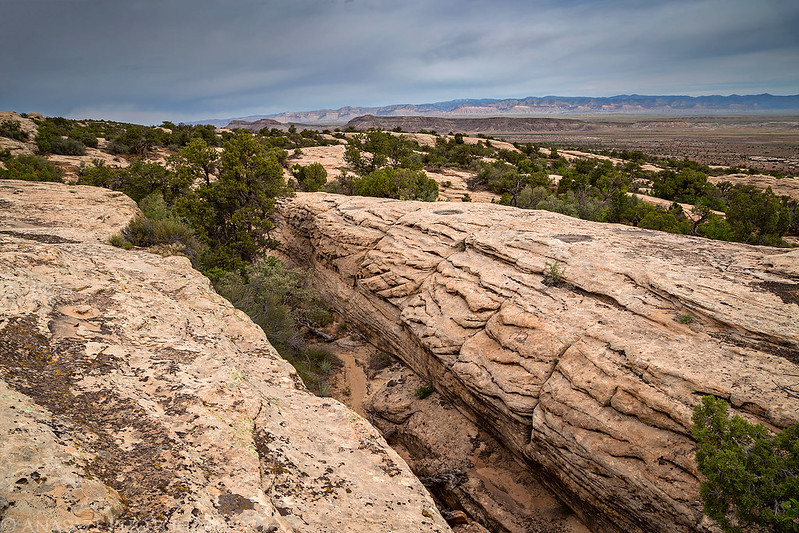 There were plenty of wildflowers to be seen during our hike. 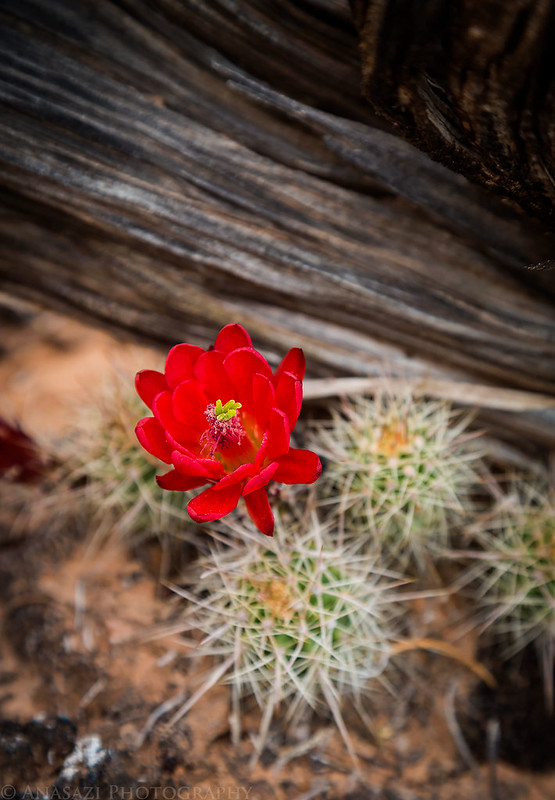 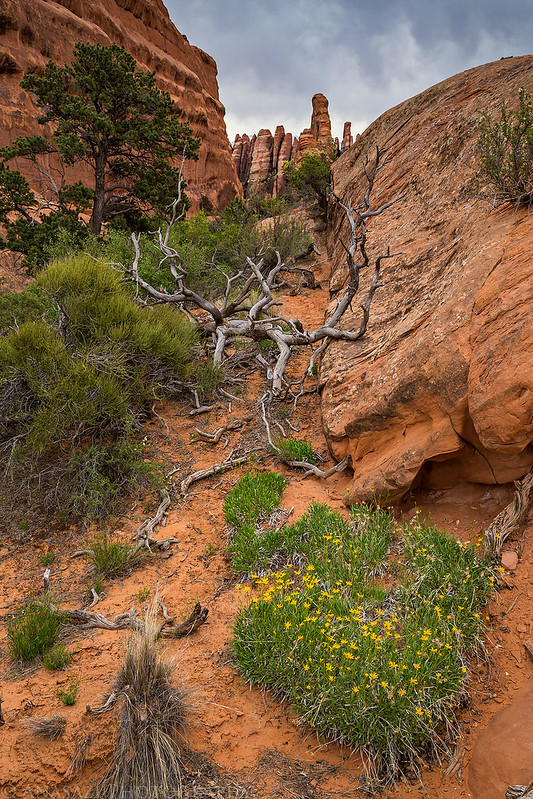 After reaching the Primitive Trail we took a short detour to visit Private Arch, which we hadn’t been to since our last hike on the loop trail. 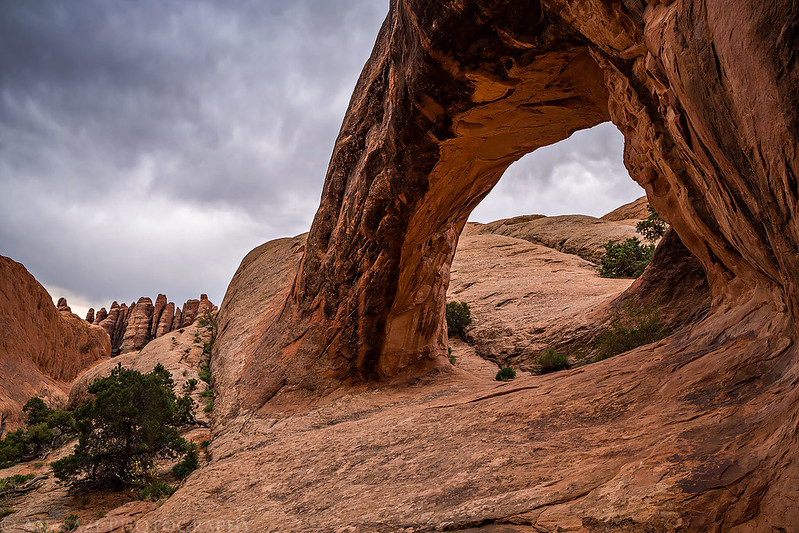 We stopped for a snack at Double O Arch. I don’t believe I’ve ever been completely alone here before, but today we were! 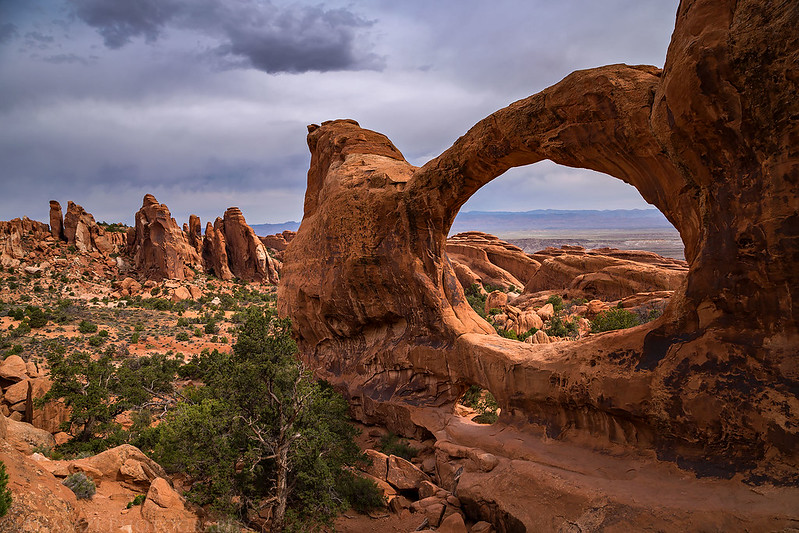 I’ve been out to this group of petroglyphs a few times before, but they are always interesting enough for another visit. 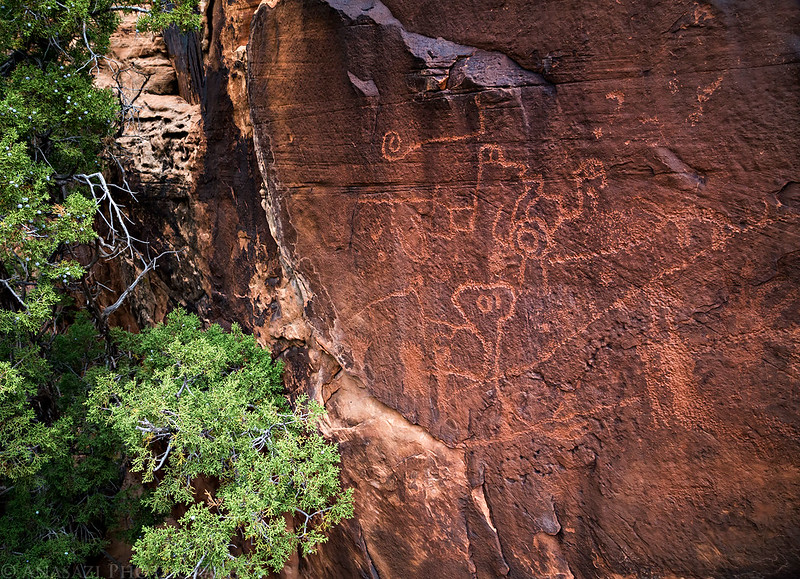 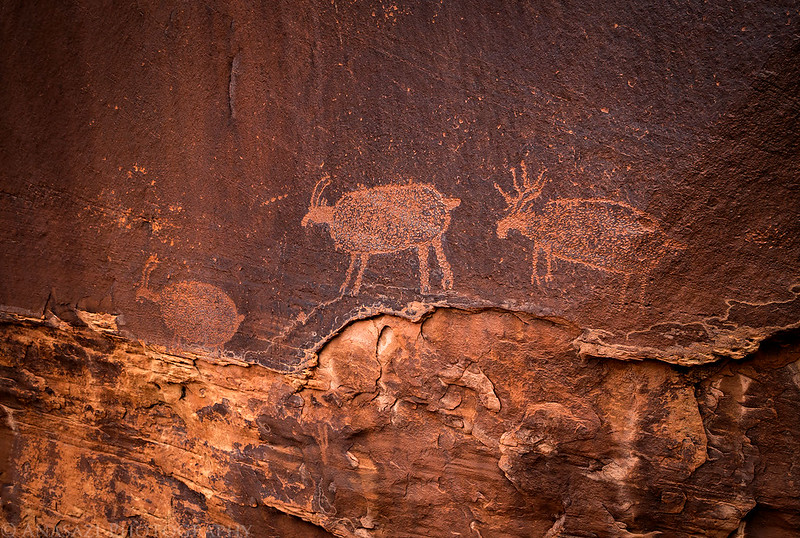 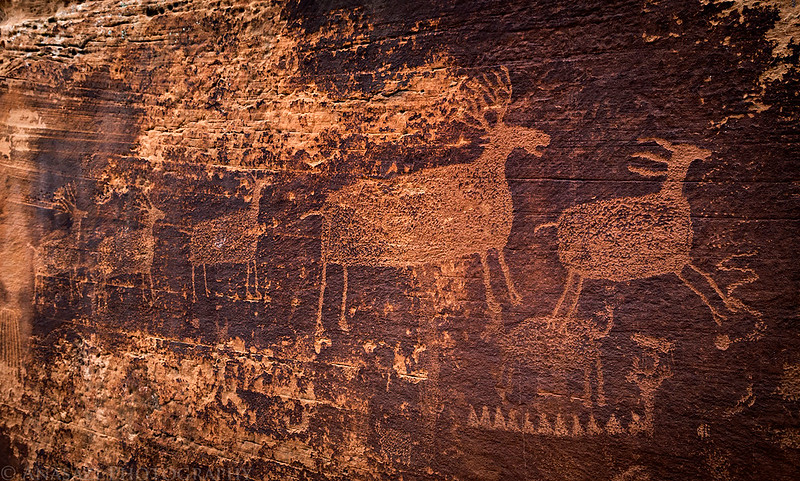 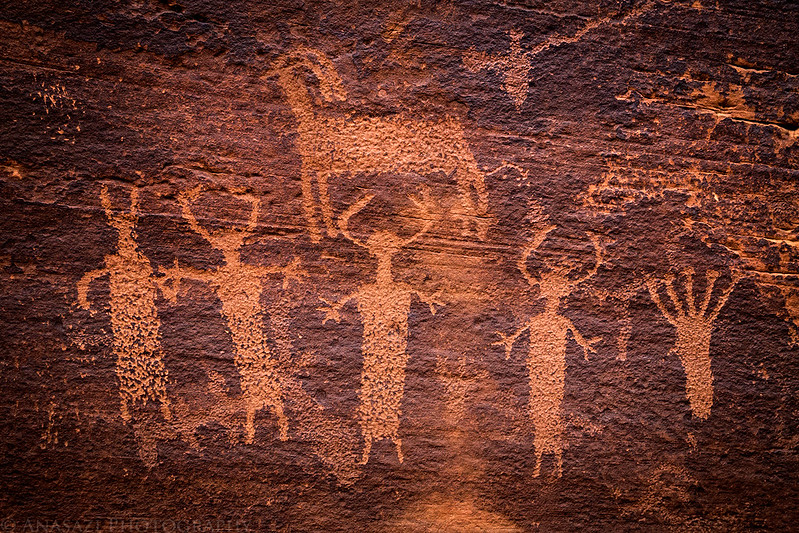 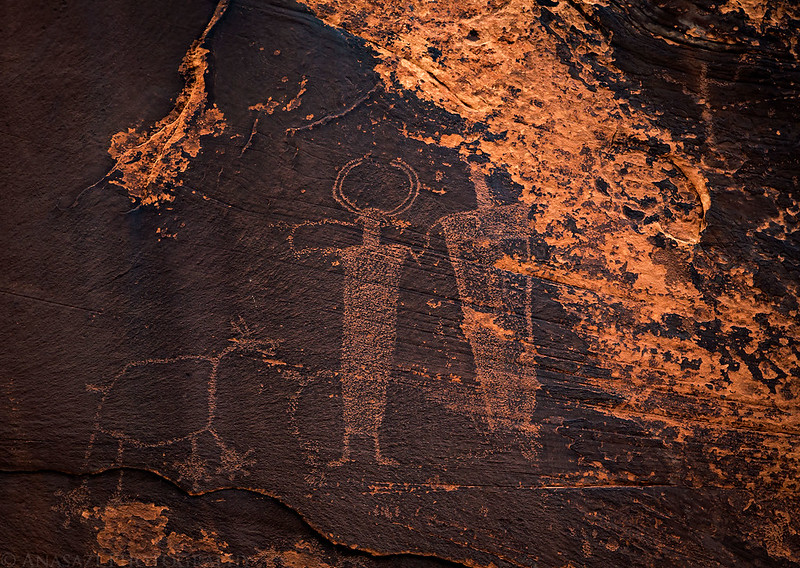 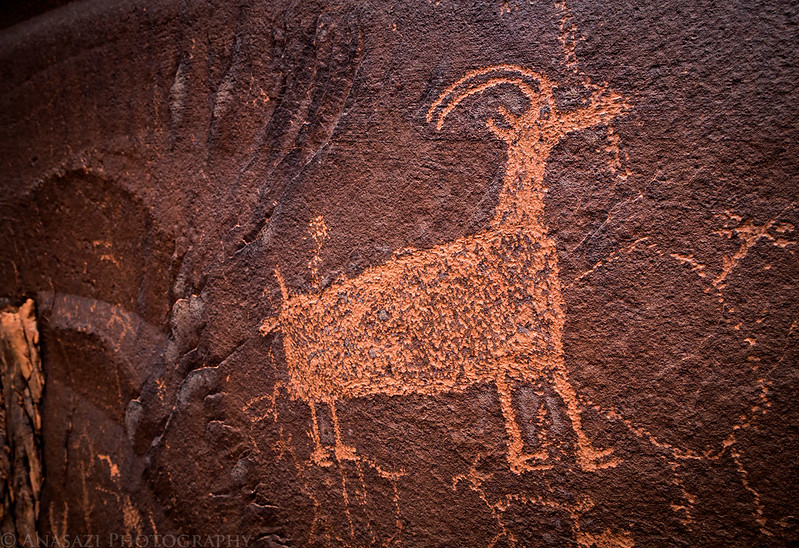 Hiking along the ledge deeper into North Devil’s Garden. 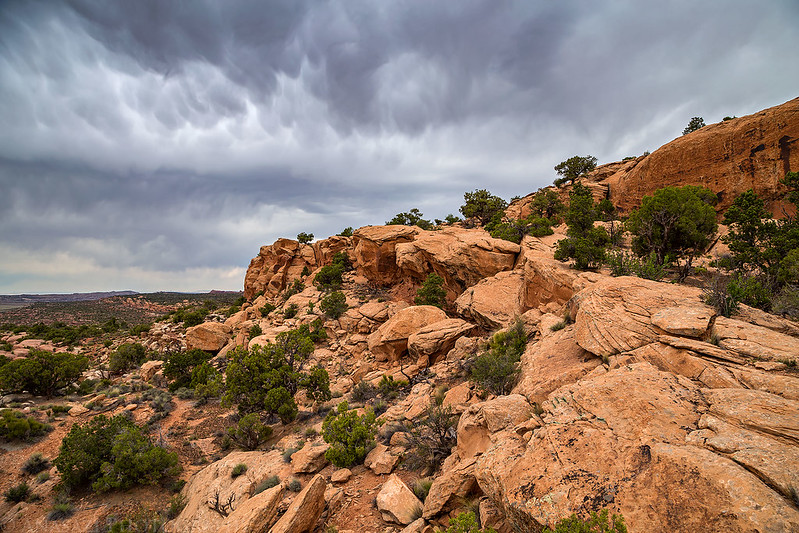 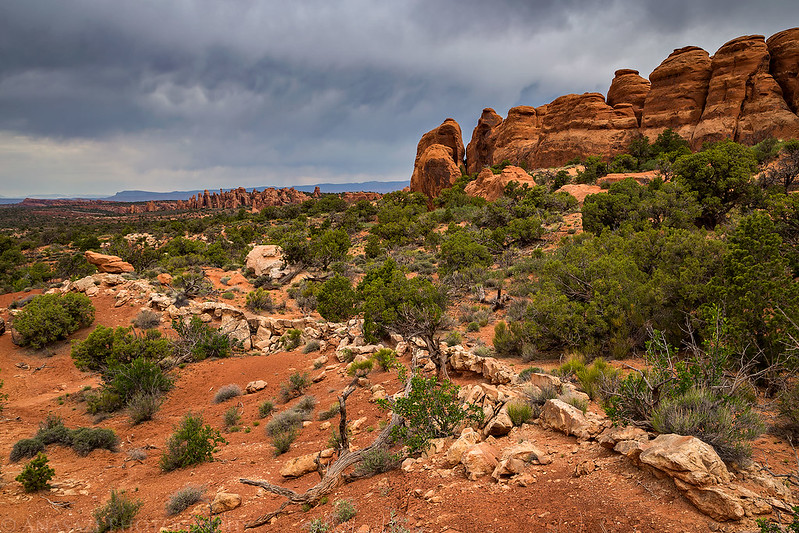 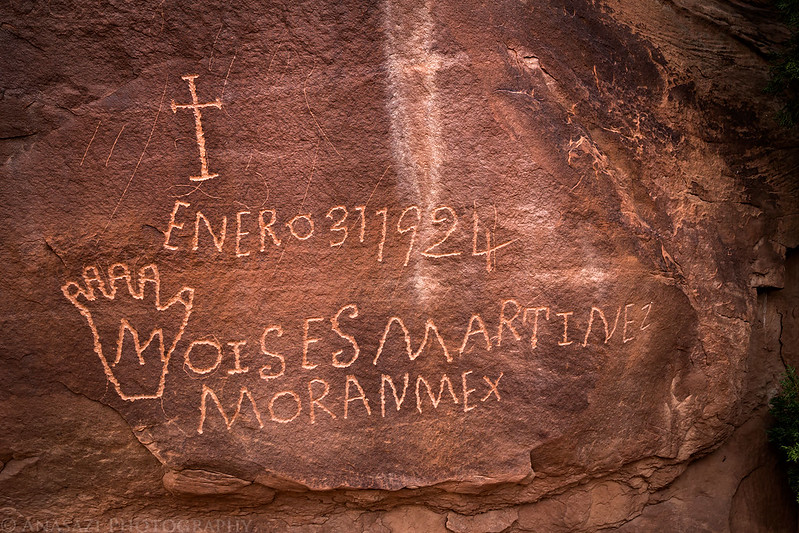 This was a small but nice petroglyph panel I hadn’t been to before. 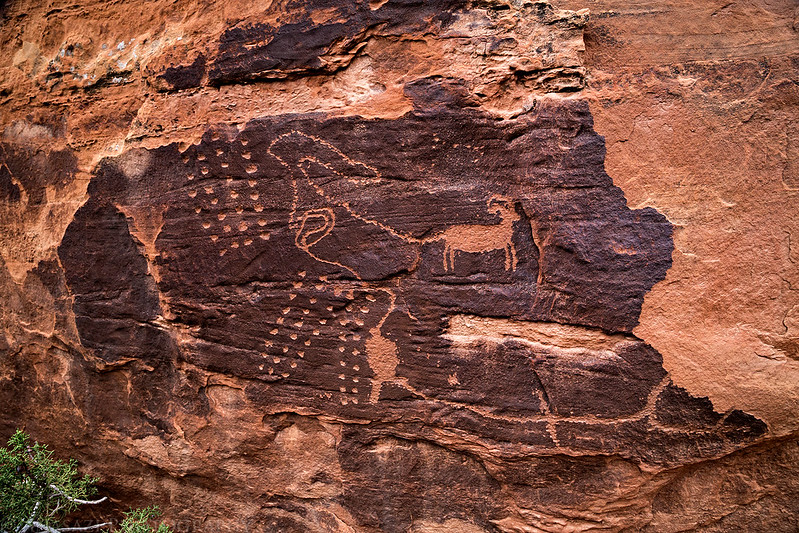 Then we found our main objective for the day, a Denis Julien inscription from 1844. One of at least eight other inscriptions that are found in Utah and Colorado. The only other one I’ve been to so far is found at the mouth of Hellroaring Canyon along the Green River. 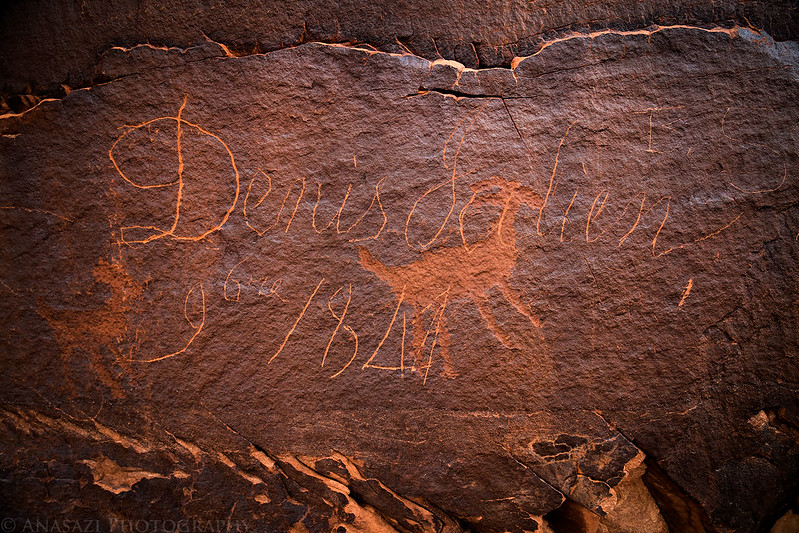 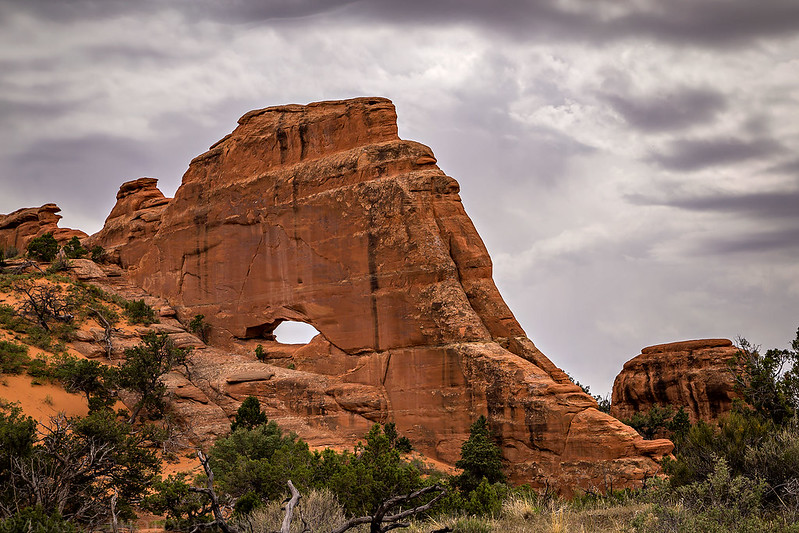 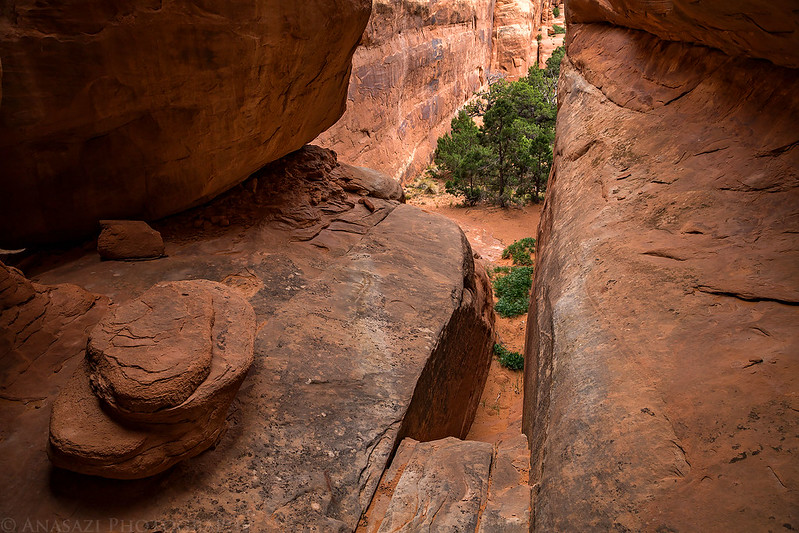 We had hoped to find a way down into the wash below so we could make a loop back to our starting point, but we were unable to before a strong storm moved into the area, so we ended up returning the way we had come. 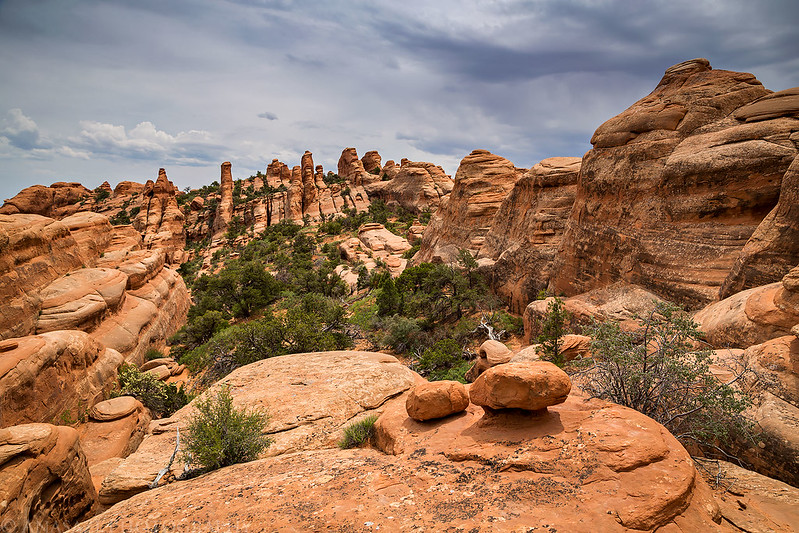 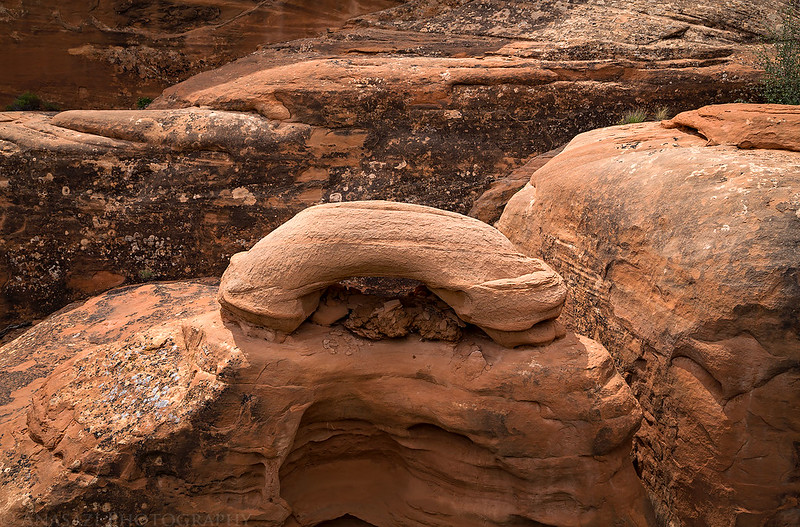 On our way back Diane stopped to check out what she thought was just another tobacco tin buried in the ground, but when she picked it up and knocked the dirt off of it she found it was a bell. That’s something neither of us have found before. 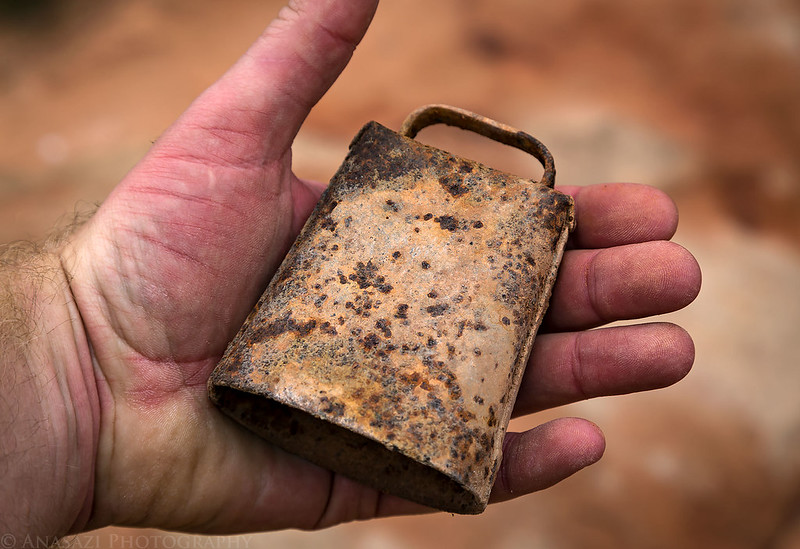 Monitor & Merrimac in the distance. Shorty after I took this photo the storm overtook us and we had to seek shelter in a shallow alcove for a little bit. 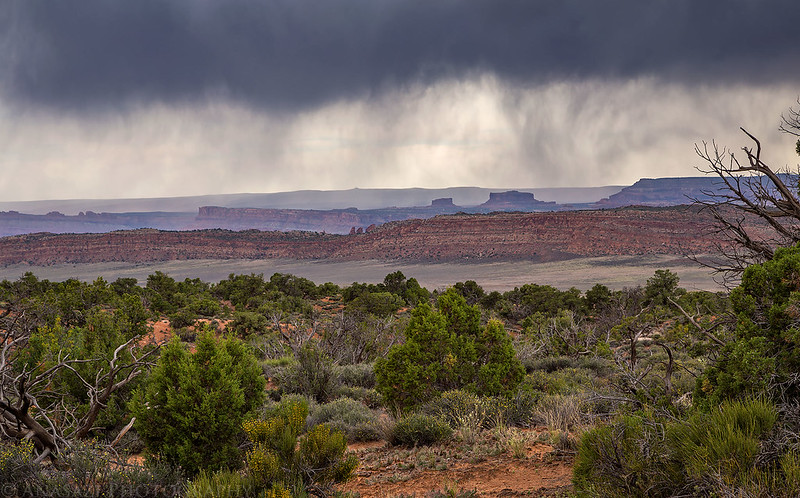 The sun came out for a little bit during the rest of our hike back down the wash. 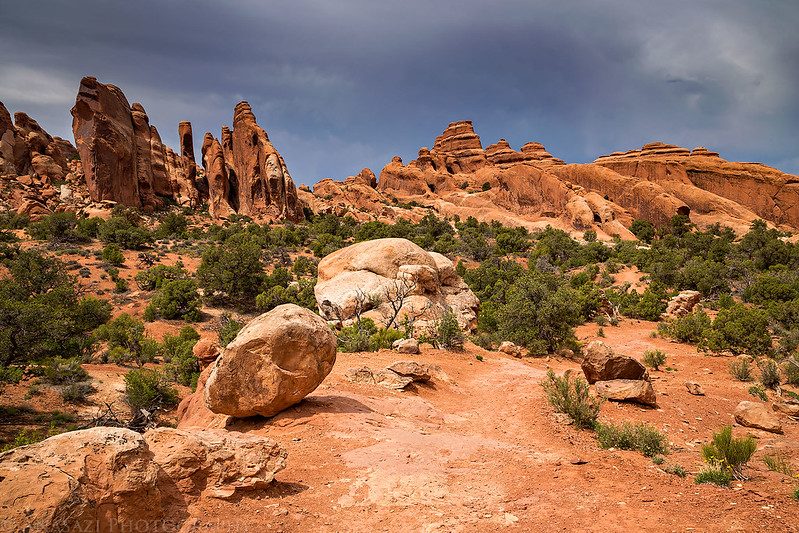 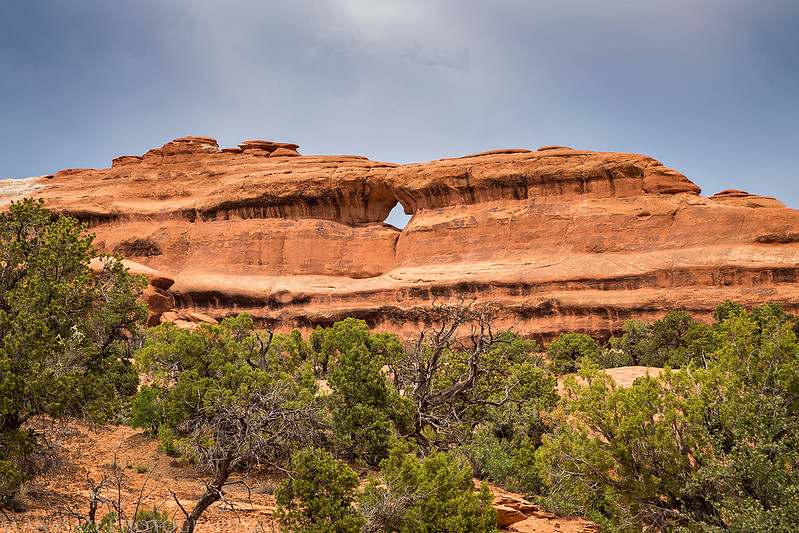 A view down the canyon he had hiked up with rain in the distance. 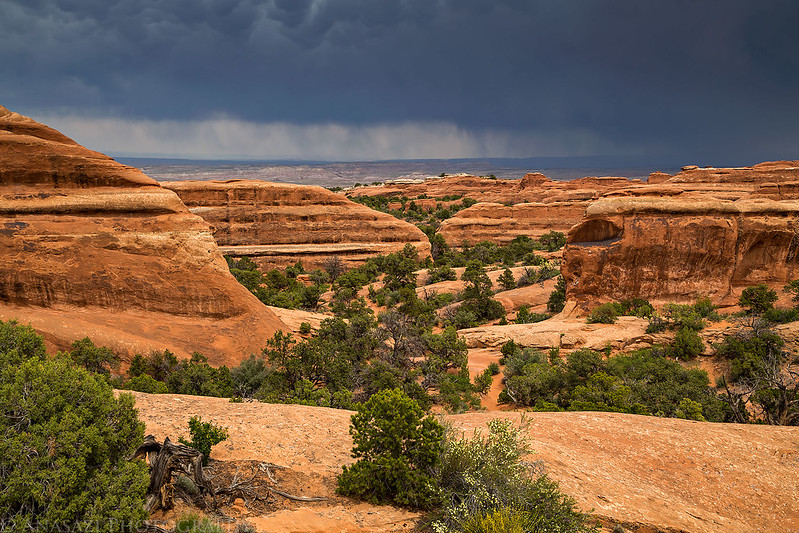 The view over Yellow Cat Flat to the Book Cliffs. 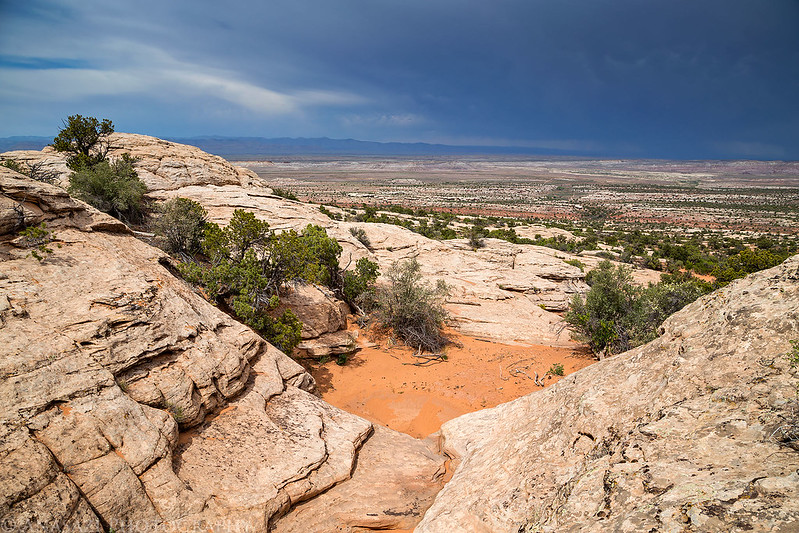 We returned to the Jeep in the late afternoon and were planning on camping near the trailhead, but unfortunately someone else was already camped there. Since the wind was picking up and thunderstorms were moving through the area we decided to just call it a day and head home since we weren’t that far away. It turned out to be a good decision since we had some pretty fierce storms blow through the area the rest of the evening and night.

Driving through The Poison Strip on our way back home. 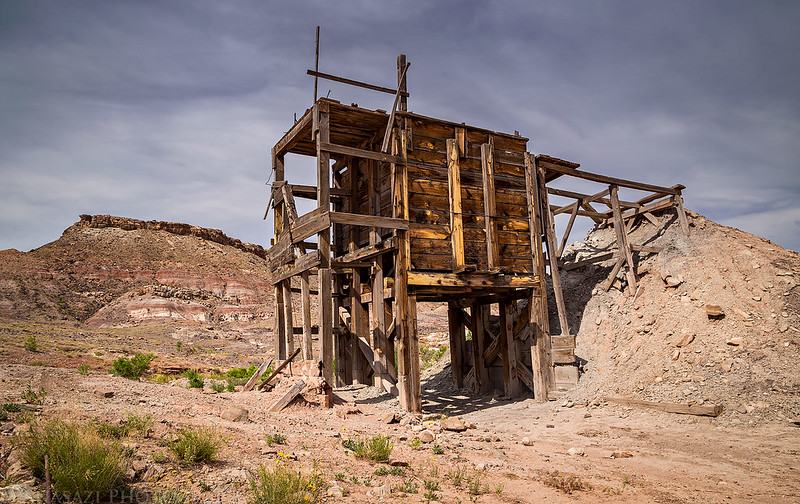 Nice light on the La Sal Mountains to end our day. 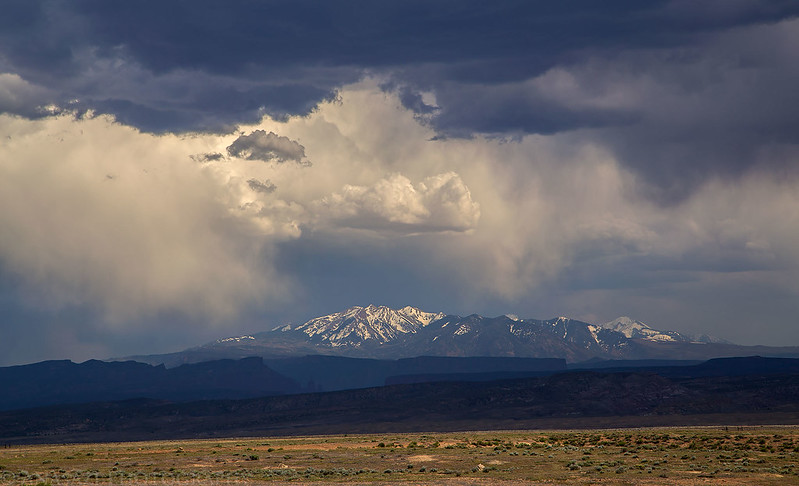 If you’ve been keeping track of my trip reports recently, it might be obvious that I’ve been spending a lot of time exploring the backcountry of Arches National Park this spring- from Eagle Park to Lower Sevenmile Canyon. After today’s visit to Devil’s Garden I am happy to report that I still haven’t run into another person in the Park yet this year!