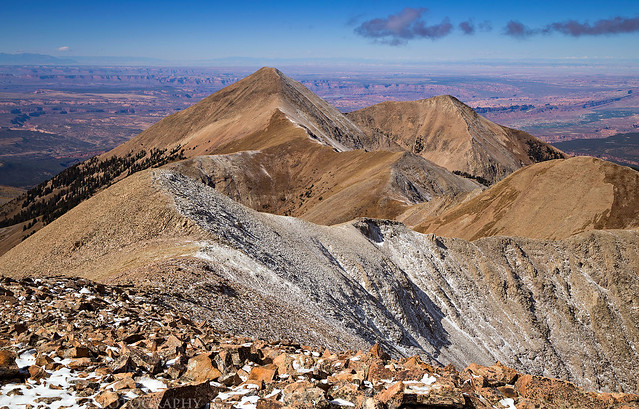 View from the summit of Mount Peale over Mount Tukuhnikivatz (12,482) in the La Sal Mountains.

After getting our gear together we hopped into my Jeep and drove up the road toward La Sal Pass. There was a fresh layer of snow on the ground as we drove up to the trailhead at the end of a short 4×4 spur road which would make things a little slippery during our climb to the summit. I still wasn’t feeling the greatest during the first couple hundred feet of elevation gain, but we just kept moving slowly and I eventually started feeling better. We kept pushing ourselves and taking breaks when needed and we did eventually reach the summit. It took us about two and a half hours which is pretty much my typical speed, so I guess I wasn’t moving as slowly as I thought.

Jared stops for a break in the rocky chute we climbed up to gain the ridge. 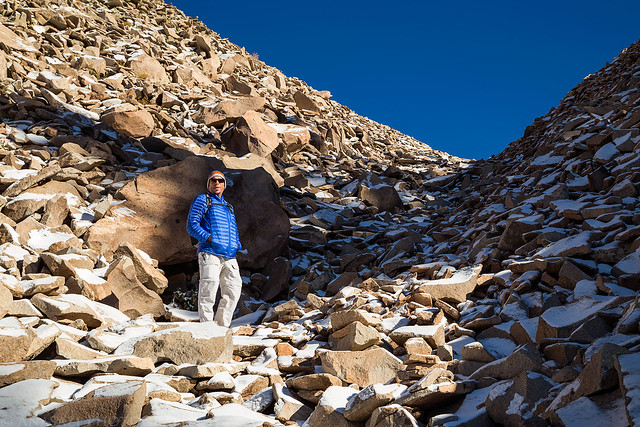 Looking back down the chute to South Mountain and the Abajo Mountains in the distance. If you look very closely, you can even see Church Rock near the turnoff to the Needles District of Canyonlands National Park. 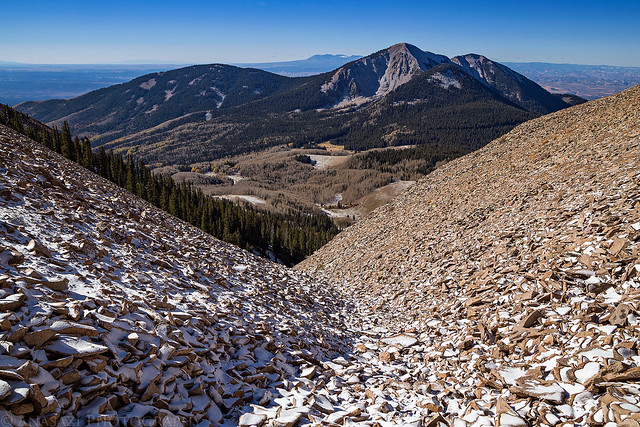 Following the trail that bypasses a false summit along the ridge. 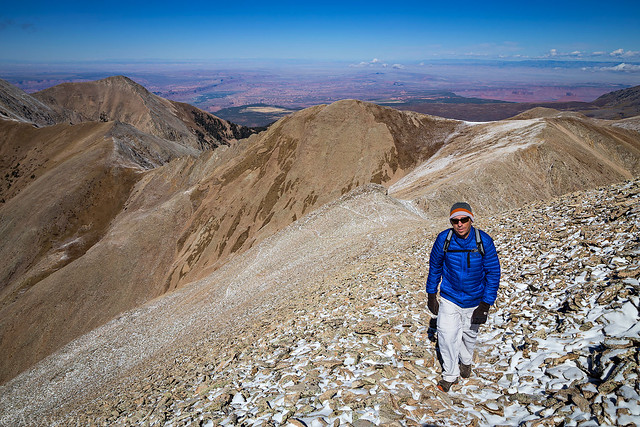 The canyonlands below and the Henry Mountains on the horizon. 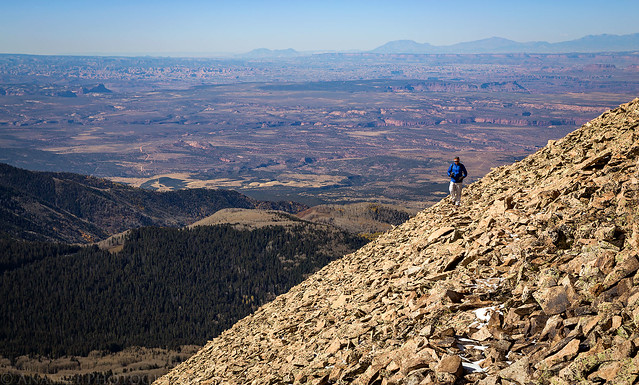 Looking up the final climb to the summit. 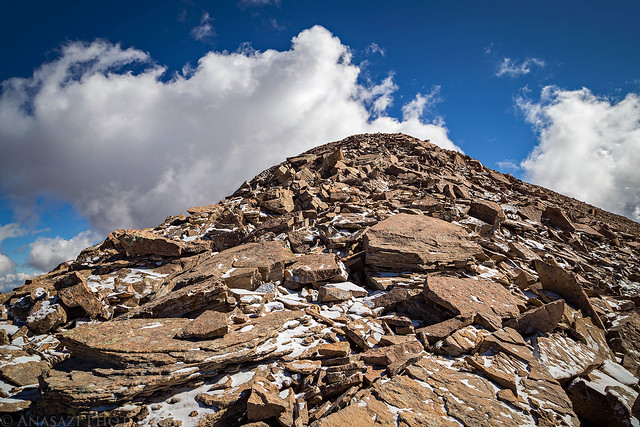 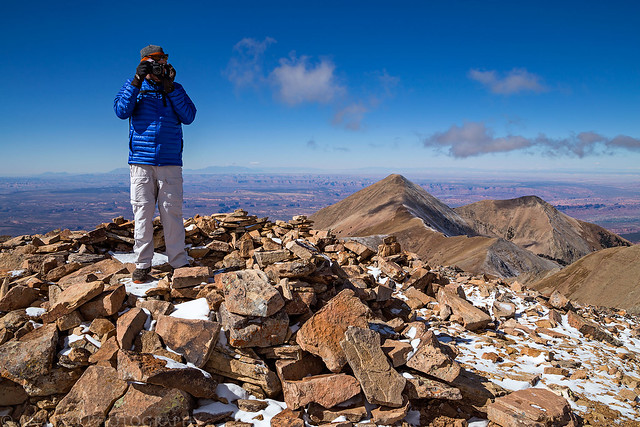 The view down the northeast ridge towards Mount Tomasaki (12,239). 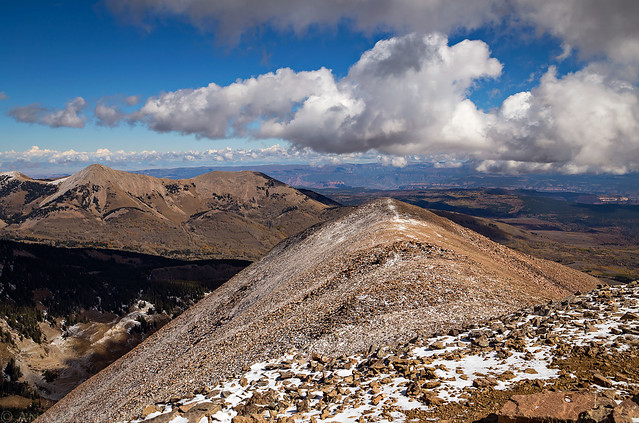 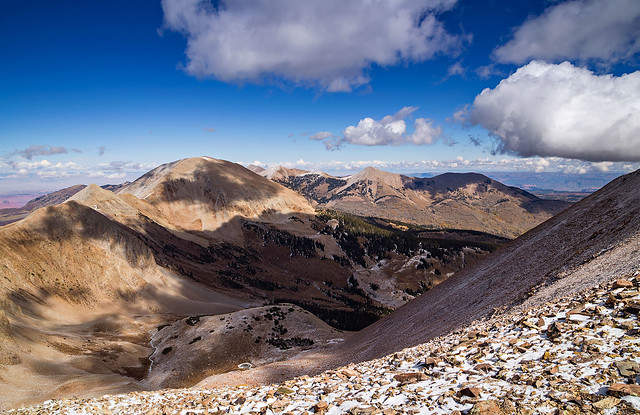 Coming back down from the summit as clouds build up around us. 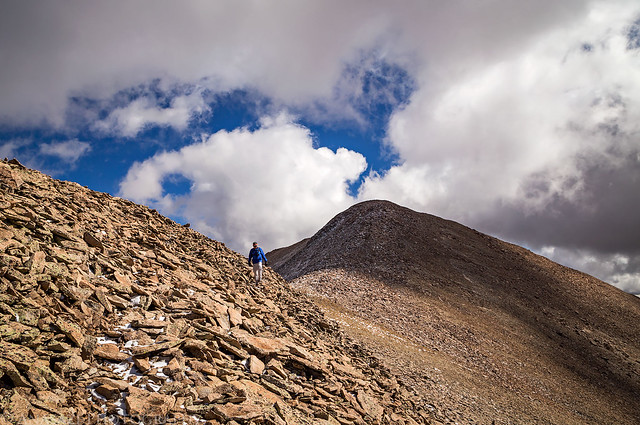 During our hike to the summit the sun had melted most of the snow that was on the rocks (except for the shaded areas), so it was a little easier on the way back down. We reached my Jeep and then drove back down the La Sal Pass Road to pickup Jared’s car and then headed into Moab. We stopped at Pasta Jay’s for an early (and delicious) dinner and then parted ways so I could get back home to pickup Diane so we could spend the next few days together.

The original plan was to pickup Diane when she got out of school and then head straight to Escalante that evening and find somewhere to camp along the Hole-in-the-Rock Road so we could begin our backpacking trip into Coyote Gulch the next morning. That plan didn’t work out, so we decided to spend the night at home and leave early on Friday morning instead.