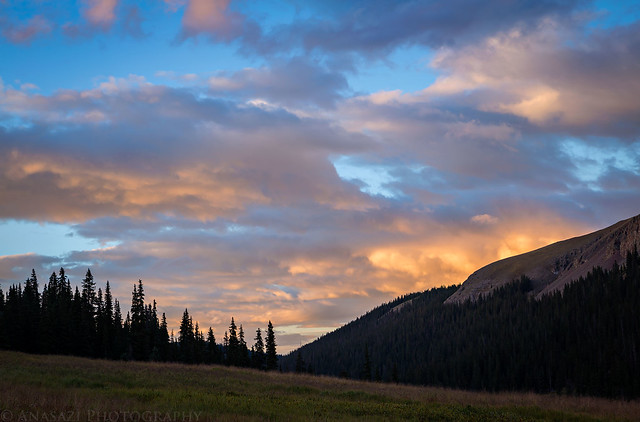 A beautiful sunset between storms near our campsite in the Uncompahgre Wilderness.

We’ve been pretty lucky in that very rarely do our weekend adventures not go as planned. This weekend would be an exception and it seemed that nothing could go right for us. Our original plan was to hike up the Fall Creek Trail the first day and then hike over the ridge to the Little Cimarron on the second day and then we would hike out on the third day. However, after it rained for much of Saturday night, we woke up to fast moving dark clouds in the sky with pretty windy conditions on Sunday. We waited around camp for a while hoping that the sky would clear up a little and not look so threatening, but that never happened (at least the wind helped dry out our wet gear). We decided it would not be a good idea to hike over the ridge in these conditions because we would be very exposed for a few miles at over 12,500 feet during the hike. Instead, we decided to turn around and hike back down Fall Creek the way we had come, cutting our trip a day short. Diane’s water bladder had also sprung a leak which was another factor in our decision to turn around since her backpack got soaked.

A bridge over the Little Cimarron near the trailhead we had intended to finish the hike at. 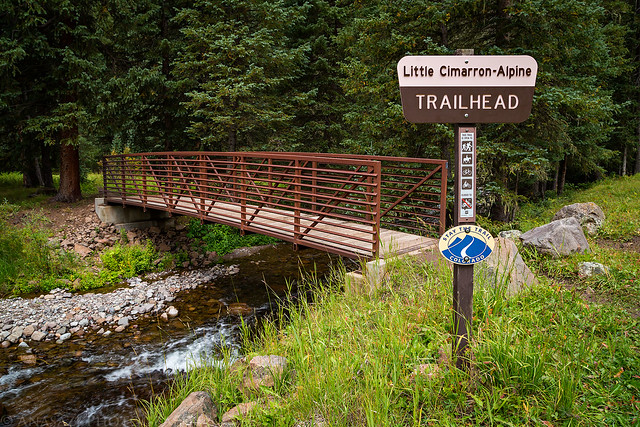 After our drive from Grand Junction to Montrose we drove over the Cerro Summit and followed the Little Cimarron to the Fall Creek Trailhead. I dropped Diane off there with our packs and then drove back down to the Little Cimarron – Alpine Trailhead where I planned to leave my Jeep. I had hoped to hike back up to the trailhead on the Firebox Trail which paralleled the road for most of the way, but soon discovered that that was a bad idea. Shortly after starting up the little-used trail, it basically disappeared into the steep hillside. The grass on the slope was slippery and I fell a few times trying to continue on the trail that didn’t seem to exist anymore. After hiking a little less than a mile, I realized that this was taking me too long and it would probably be quicker if I returned to the road and just hiked up that instead. When I arrived back at the road I was near my Jeep again, so in order to save myself a little distance I moved my Jeep up the road to the Little Cimarron East trailhead at the end of the first big switchback. Then I started hiking the four miles up the road. However, after hiking almost a half mile I realized that I had forgotten my water bottle back in the Jeep, so I had to turn around and hike back down for it. Things were just not going my way this morning! What was supposed to be a quick 3.5 mile hike between the two trailheads ended up turning into over 6 miles of hiking for me (at least I didn’t have my heavy pack with me!). Eventually I made it back up to Diane at the trailhead, though later than I had hoped, and we started up the Fall Creek Trail.

The sign at the beginning of the Firebox Trail. Though the trail is on maps and signed, you can see it’s already pretty faint in this photo and completely disappears in about a quarter of a mile. It doesn’t seem that this trail has gotten much use in a while… 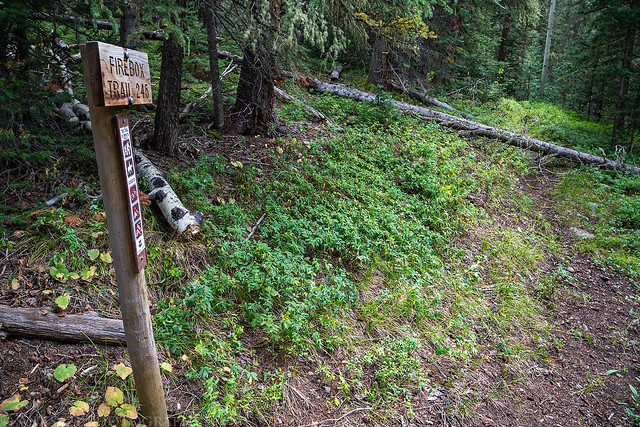 This is what the Firebox Trail turned into after a short distance. While I can see a faint segment of trail in this photo, I soon couldn’t even find that. Typically, I would love to try and follow the old trail to the end, but Diane was waiting for me at the upper trailhead so I didn’t have the time to spare today. Did I mention that the grass was wet and slippery? I slipped and fell a couple of times on this steep slope… 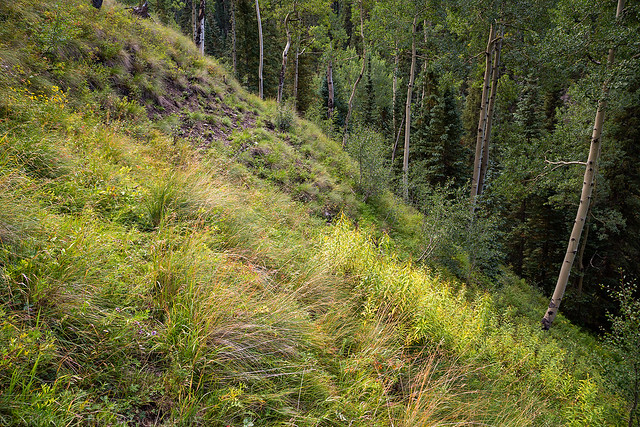 After giving up on the Firebox Trail, I moved my Jeep over to the Little Cimarron East Trailhead and had hoped to finish off our loop by hiking through this valley. 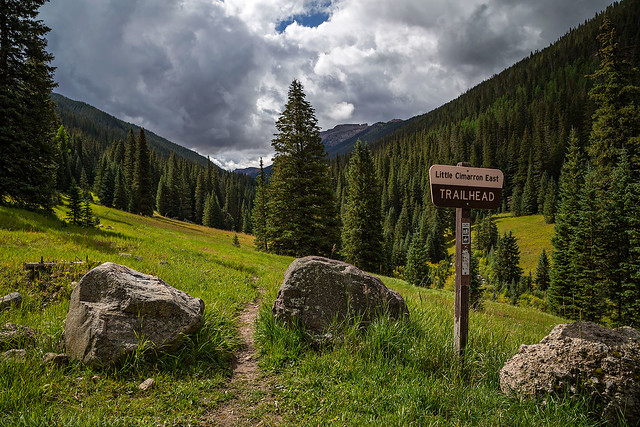 Hiking the road back up to the Fall Creek Trailhead. It was around 4 miles in length with about 1,200 feet in elevation gain. The grade was pretty mild so it didn’t take me too long. 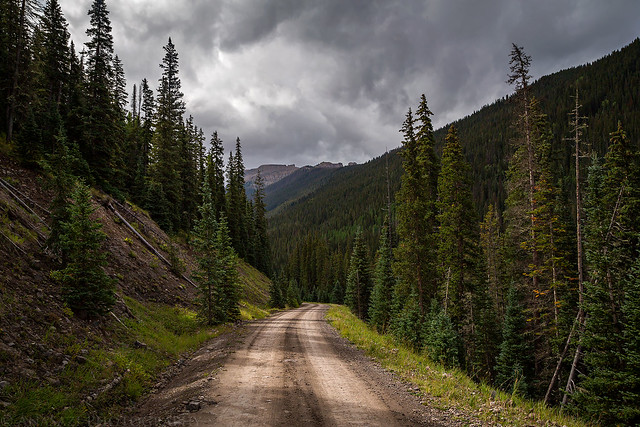 After a few issues this morning we were finally entering the Uncompahgre Wilderness! 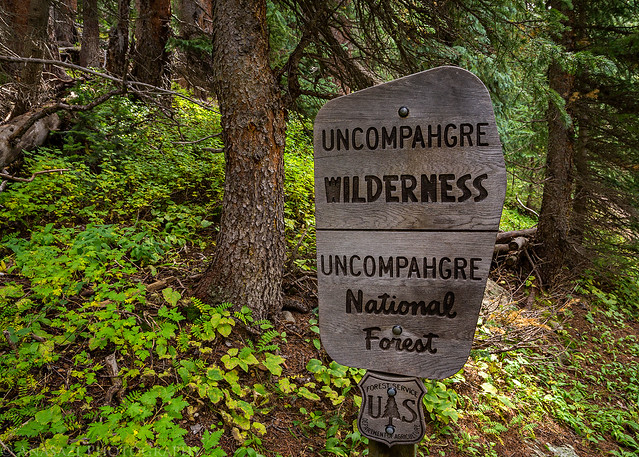 Diane hikes ahead of my near the top of the Firebox Creek valley before we descended to Fall Creek. 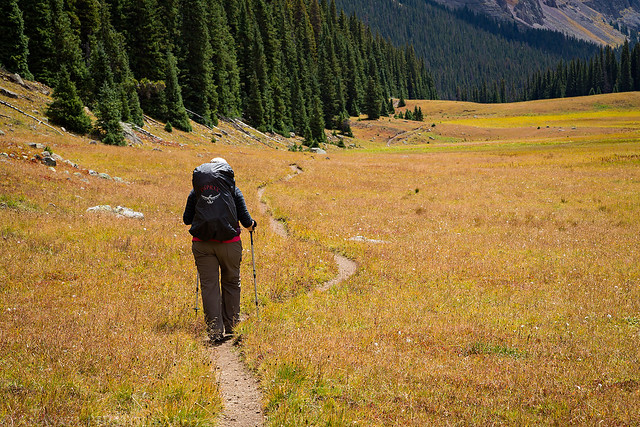 Following the trail through the very open Fall Creek valley. One interesting thing about this valley is that all the trees seem to grow only along the edges of the valley at the base of the mountains which leaves the bottom of the valley very open and exposed. 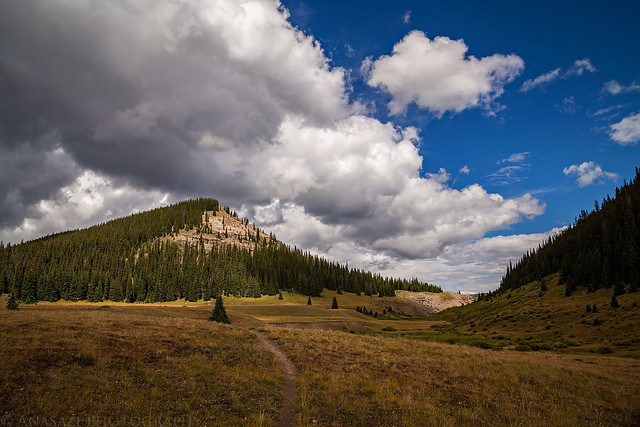 We found a nice campsite back in the trees near the top of the Fall Creek drainage and got our tent setup just before the first of many rain storms started. I took this photo after the rain stopped for a little bit. 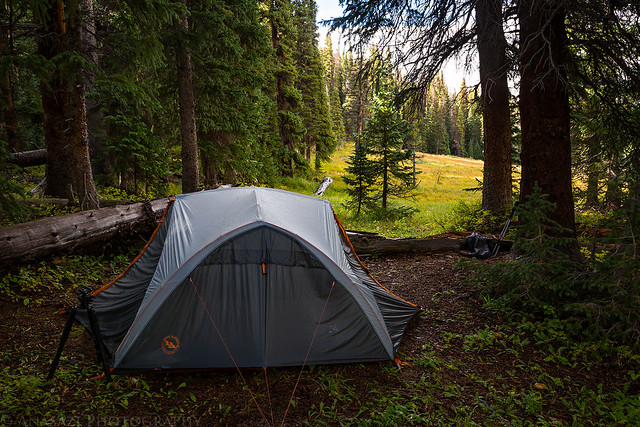 The sun would come out again that evening and would stick around until sunset. 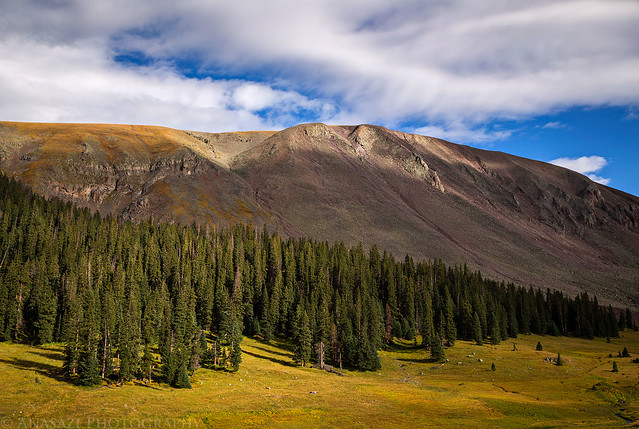 The view down Fall Creek from near our campsite. 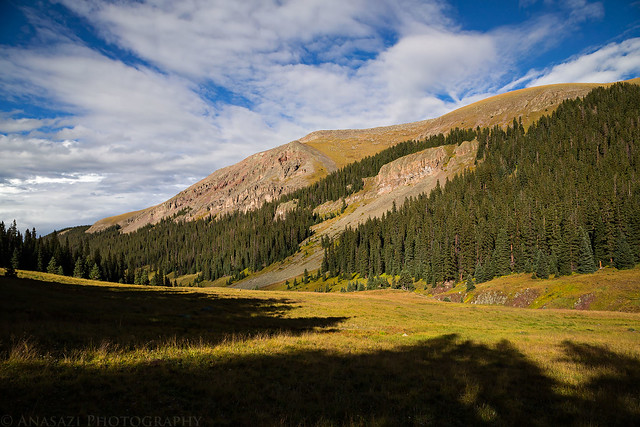 A nice view up Fall Creek to Point 13051 near the head of the valley. 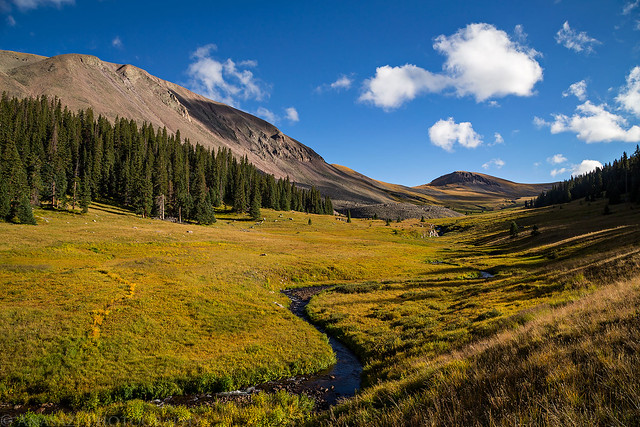 Last of the light on the top of the mountains across the valley. 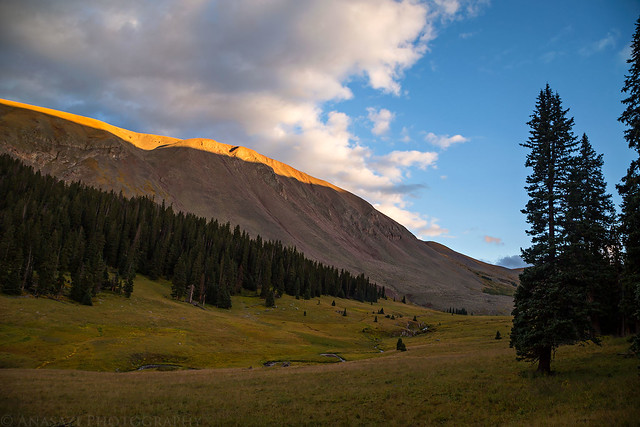 There were a few nice clouds at sunset, and a little color, too. 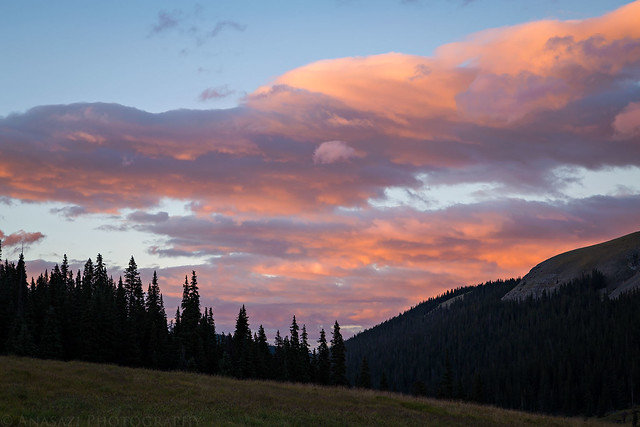 We went to bed shortly after sunset and it would rain on and off again all night. Luckily the wind didn’t really start up until the morning so we slept pretty good. I had set my alarm to get up for sunrise, but it was raining during that time so I went back to sleep until it stopped.

Early morning light on Unnamed 13051, which I climbed last year. 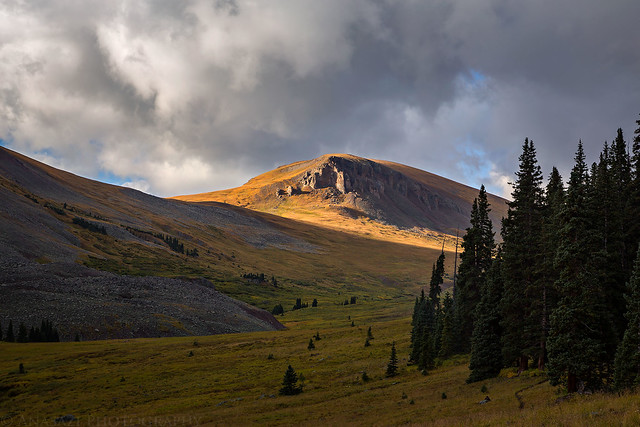 There were plenty of clouds moving very quickly through the sky this morning and some of them looked pretty threatening. Diane enjoys the morning near camp. 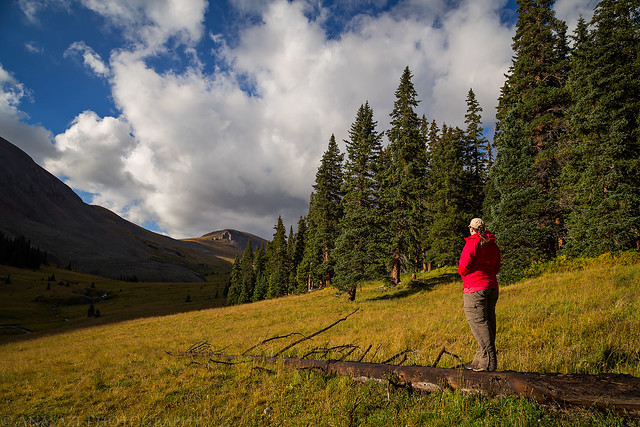 After waiting around to see if the weather might clear, we finally made the decision to turn around and hike back out the way we had come. 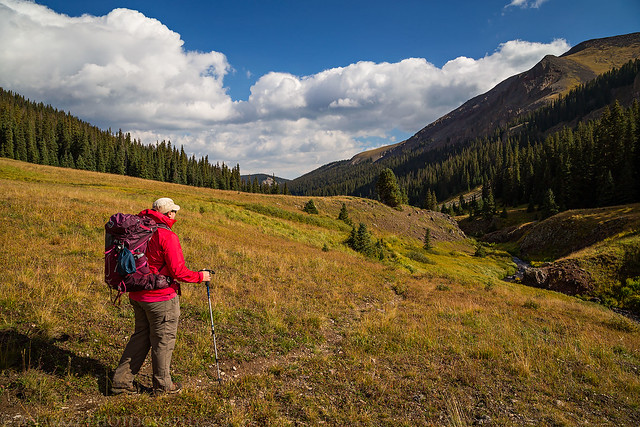 A little spotlight over Fall Creek on our way back down the valley. 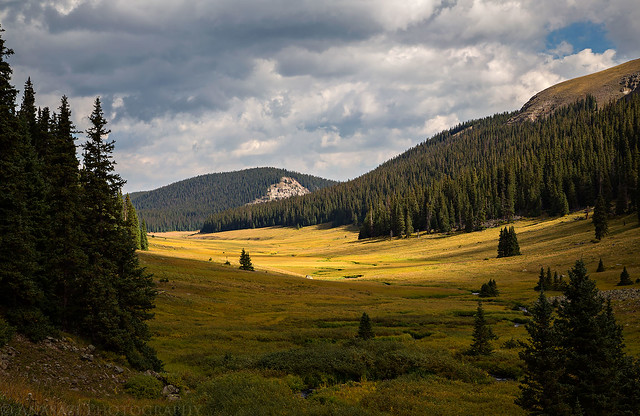 Looking up at the high ridge we would have had to traverse to get to the Little Cimarron. We will have to return another time for that. 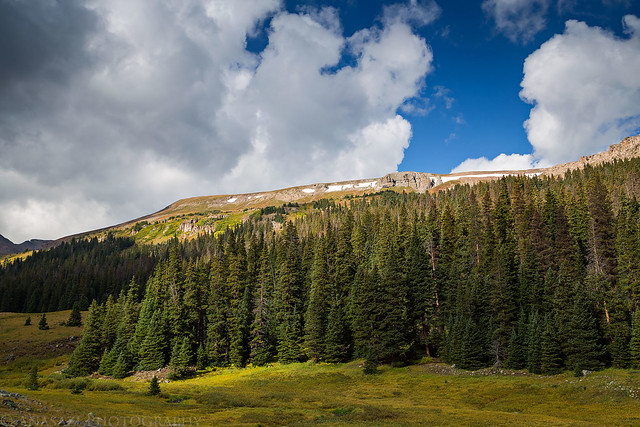 The trail alongside Fall Creek. 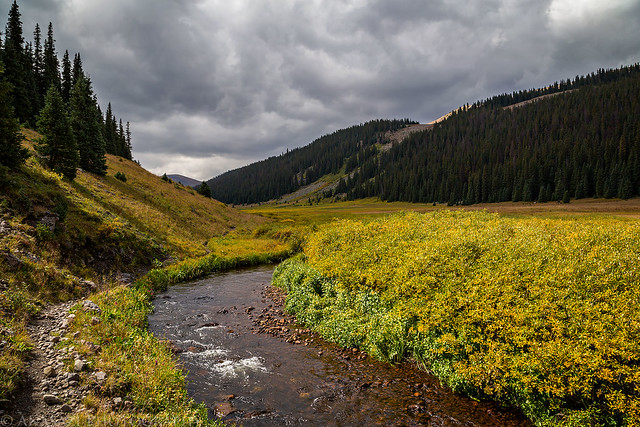 We made a short detour on the way back to visit an overlook of the confluence of Fall Creek and Big Blue Creek. 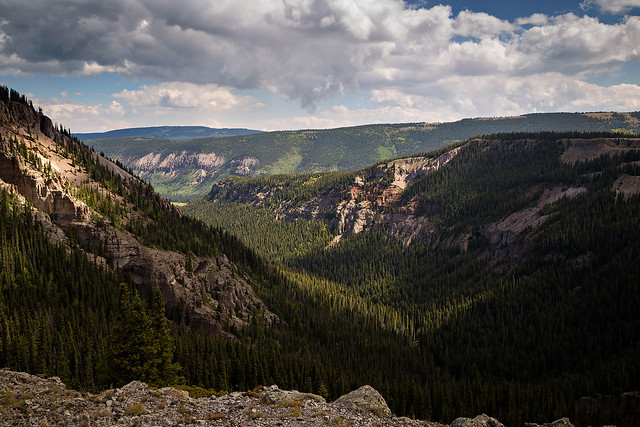 It’s funny, as soon as we crossed back over to Firebox Creek the sky was nice and blue with a few clouds. However, looking back towards to Fall Creek, it was still covered with darker clouds. 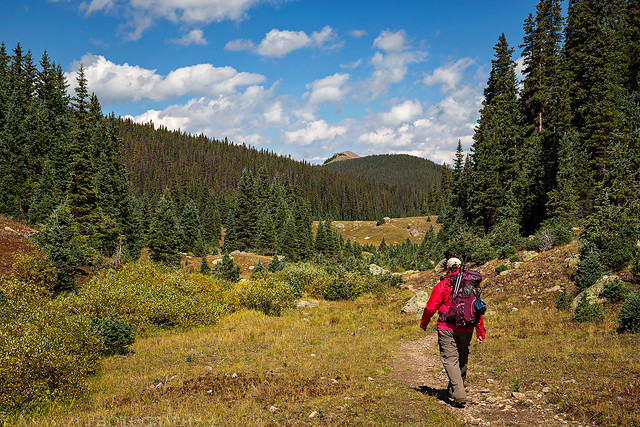 Since my Jeep was parked down near the Little Cimarron, we had to follow the road back down an extra four miles. 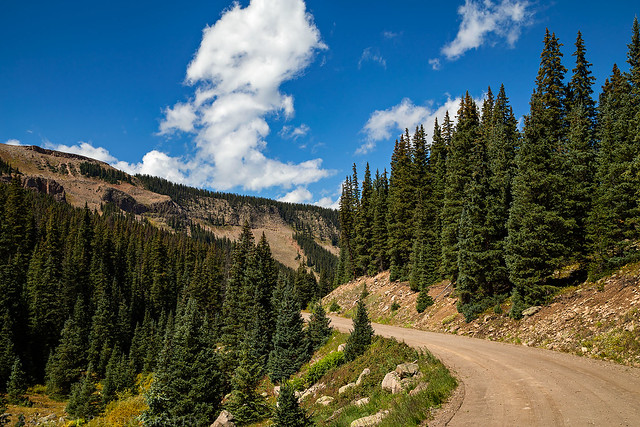 Even though we didn’t get to complete the Little Cimarron Loop as I had hoped, we still had a nice overnight backpacking trip into the Uncompahgre Wilderness for Labor Day Weekend and will definitely be returning!