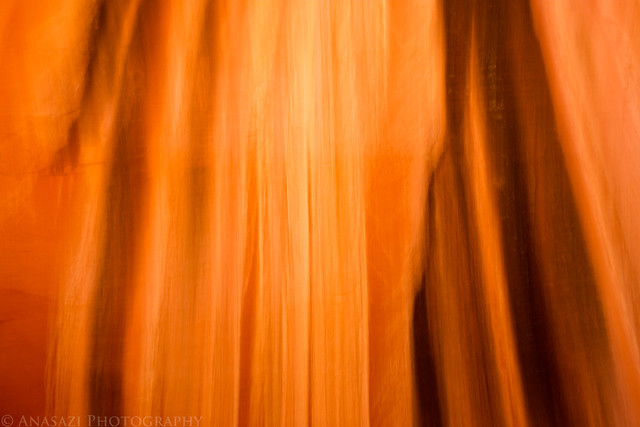 Leaving the Cedar Mesa Campground on the trail to Red Canyon. 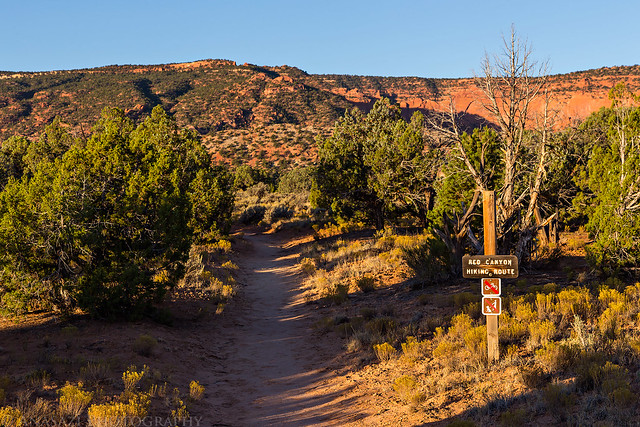 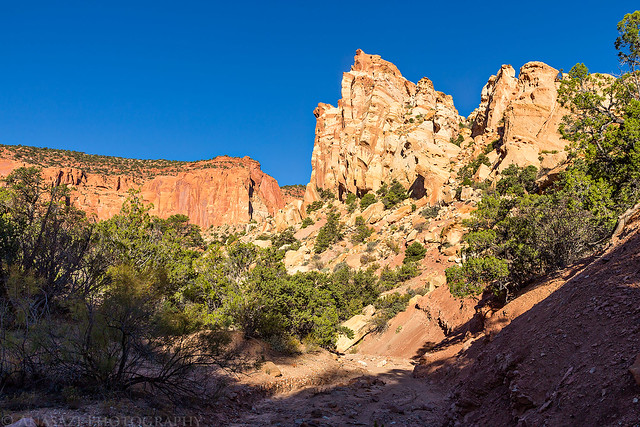 Jared walks ahead of me as we near the end of the canyon. We found a few good-sized petrified logs in this section. 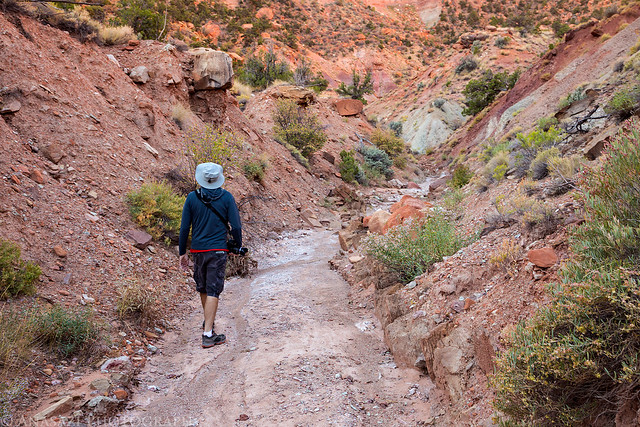 After returning to camp we packed up and took off along the Burr Trail to Boulder for lunch and to check the weather. We knew that storms were supposed to be moving into the area and wanted to get the latest weather forecast so we could plan accordingly. We stopped for lunch at the Burr Trail Grill and were able to find out that there were still thunderstorms predicted for later in the day and for the next couple of days. Exploring slot canyons would be out of the question until later in the week. We ended up driving back on the Burr Trail to find a campsite along the Wolverine Loop Road for the night. Then we spent the rest of the afternoon hiking down Wolverine Canyon.

View over Long Canyon as we back on the Burr Trail to find a campsite. 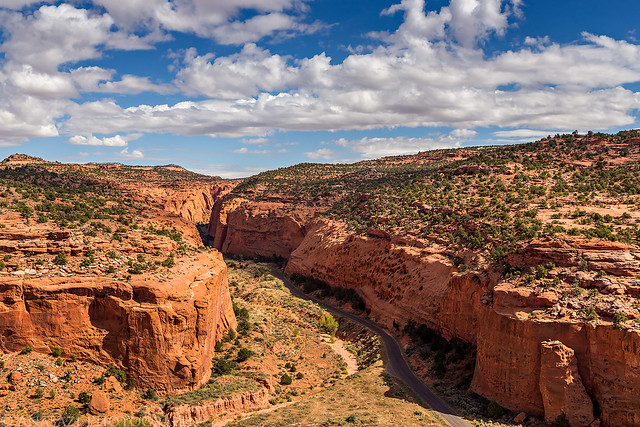 While we were driving though Long Canyon we made a quick stop to explore a short side canyon. The entrance was hidden behind a few cottonwood trees. 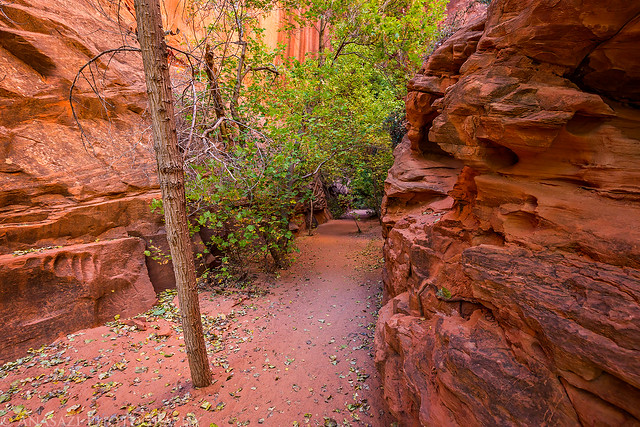 It was just a short little slot canyon that ended at a tall dryfall. 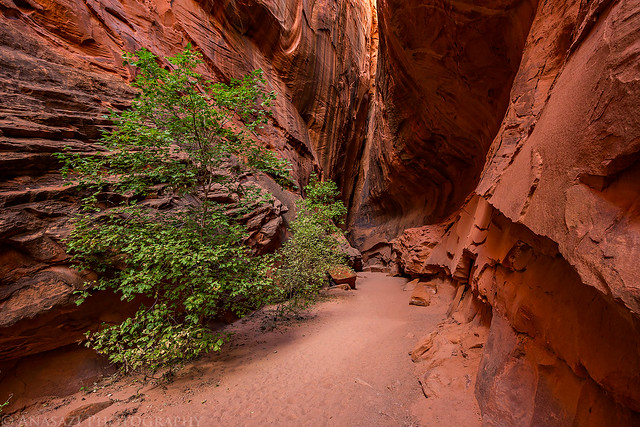 Jared checks out the dryfall at the end. 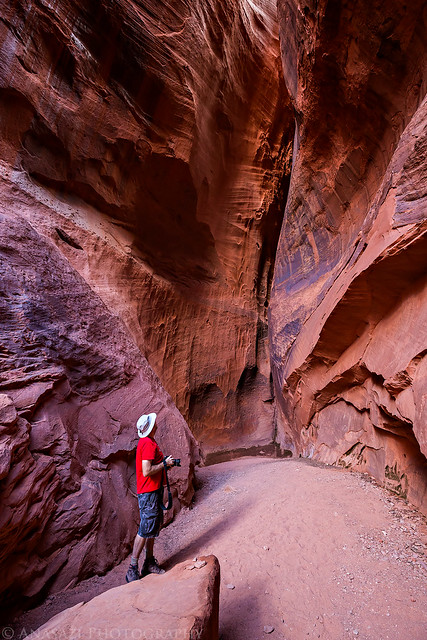 After setting up camp along the Wolverine Loop we drove over to the Wolverine Trailhead and started hiking down the wash. We could see dark clouds starting to move in from the southwest, but the sky to the north was still clear and blue. There was plenty of petrified wood to check out along the way. We ended up hiking about three miles down the canyon and then decided to turn around when it started to get late and the storms were getting closer. About halfway back to the trailhead it started to rain on us pretty good so I got out my rain gear for the rest of the hike.

We saw plenty petrified wood along the way but this large log along the wash caught my eye. 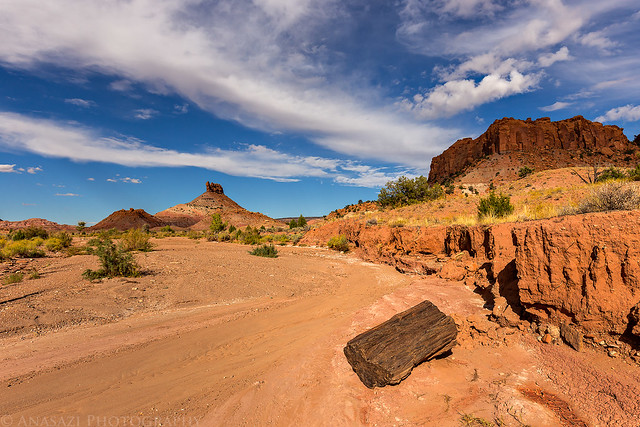 Hiking further into Wolverine Canyon as the dark storm clouds move in. 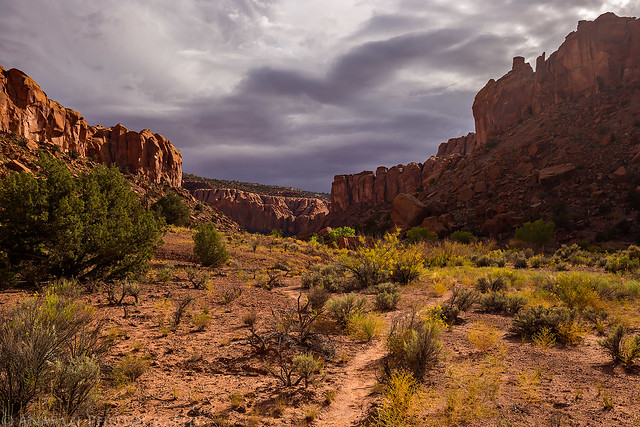 An interesting boulder in the wash we passed shortly before turning around and hiking back out. 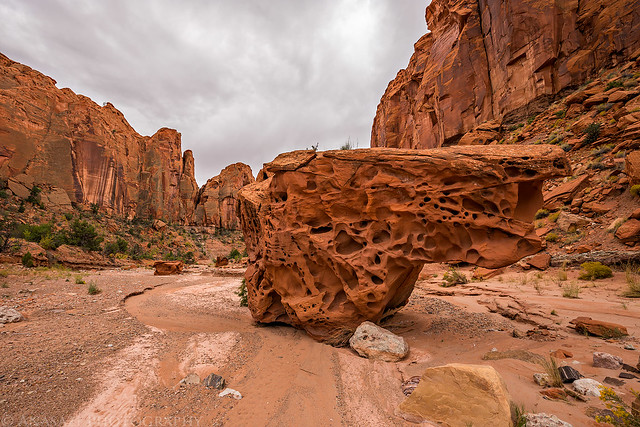 It continued to rain during our drive back to camp and we had to wait in my Jeep for a while until there was finally a short break from the rain at sunset.

A brief reprieve from the rain at camp as the sun set. 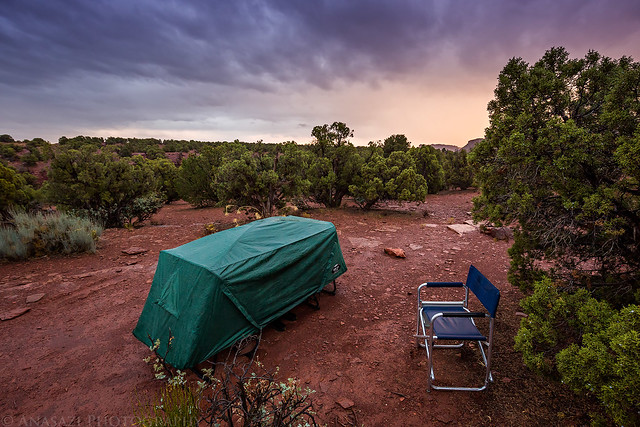 The break in the rain didn’t last long and it would rain pretty heavily on and off all night. I woke up around midnight when the rain had stopped for a short while and got out of my tent to watch an amazing lightning show to the southwest. It was moving our direction and would soon be upon us. I got back in my tent and tried to fall asleep again with the constant flashing of light around us and echoes of thunder.