A little ruin we visited that was close to camp. 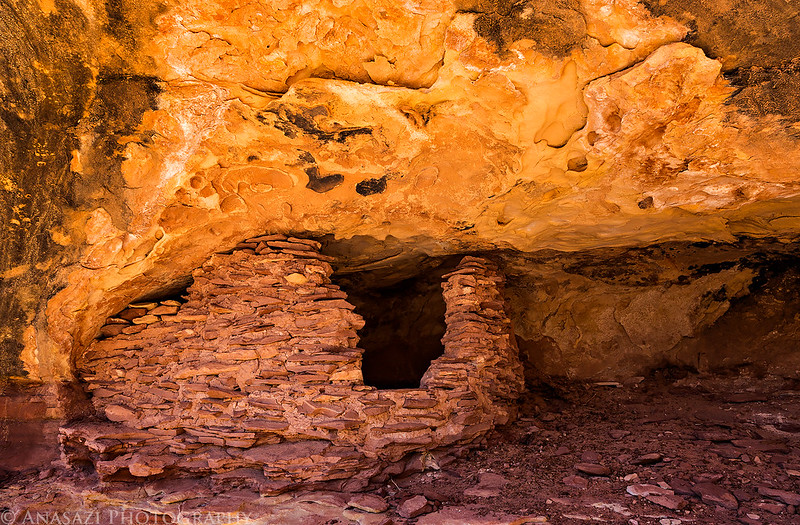 We made sure to visit the Five Faces pictographs while we were here. I have been to this panel a few times before but this was Diane’s first time. It’s always nice seeing some old friends. 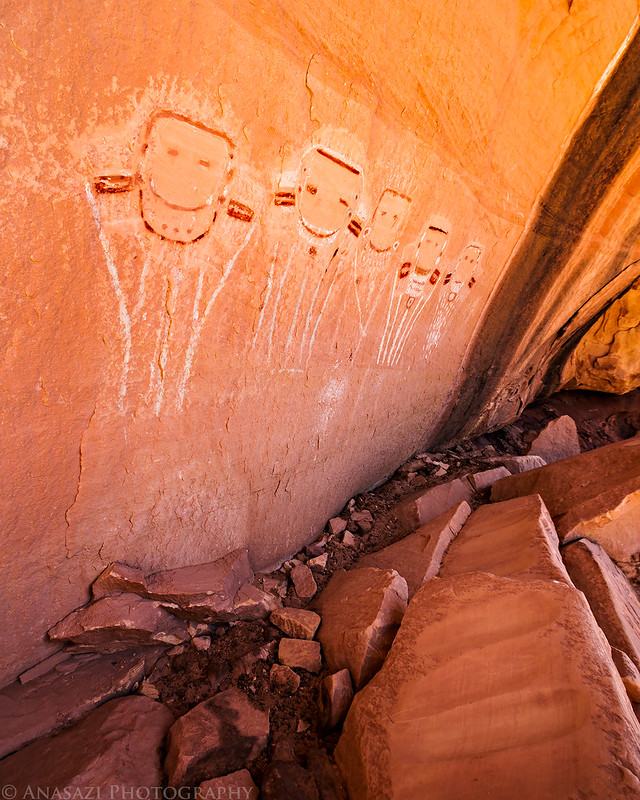 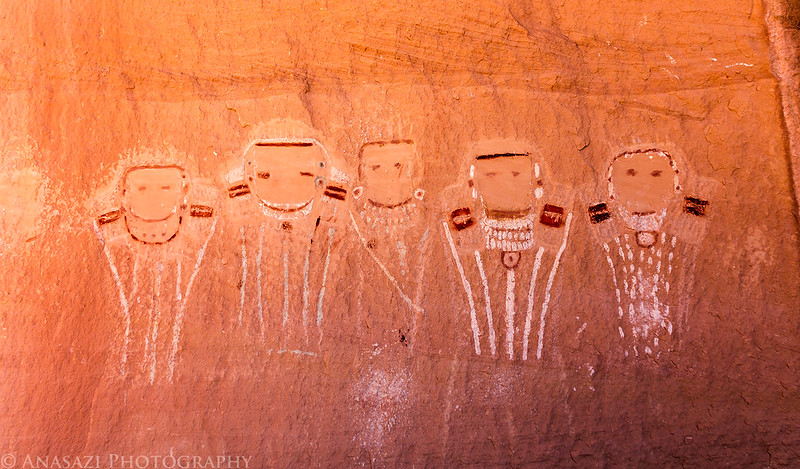 Searching for ruins and rock art below a cool striped sandstone wall. 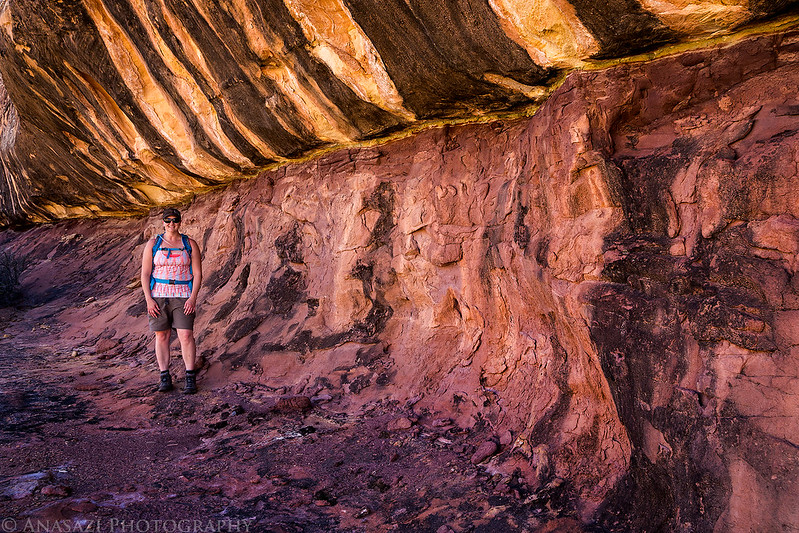 I loved the stripes in this part of the canyon. 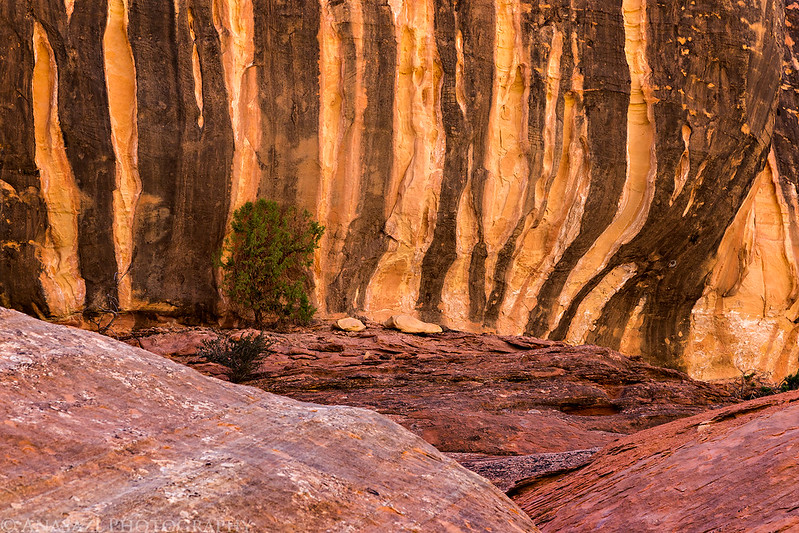 A high and inaccessible petroglyph we almost missed. I managed to catch a glimpse of it as we exited a short side canyon. 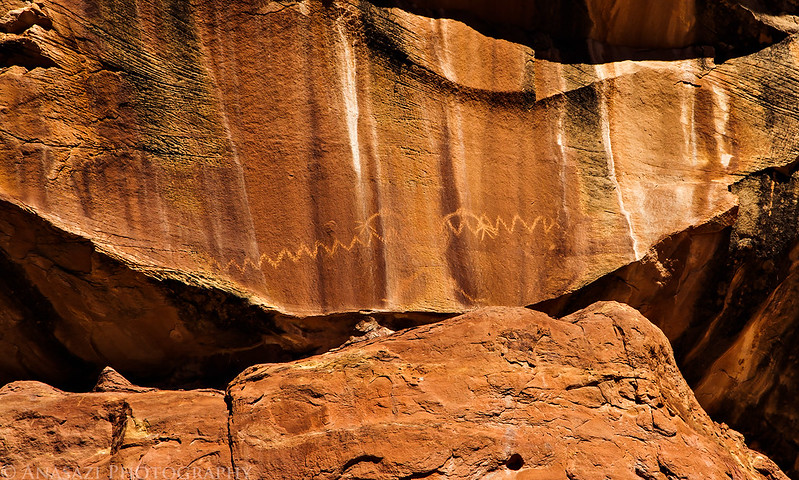 The following ruins were a bit difficult to get to, but were definitely worth seeing up close. 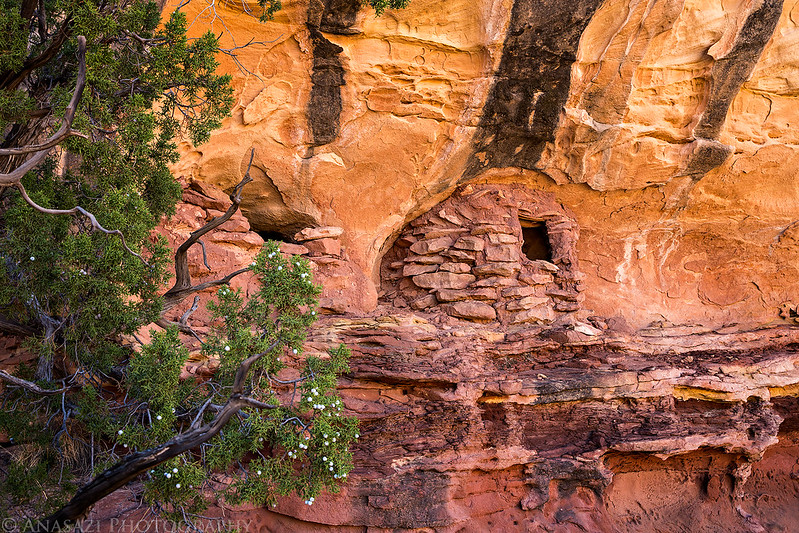 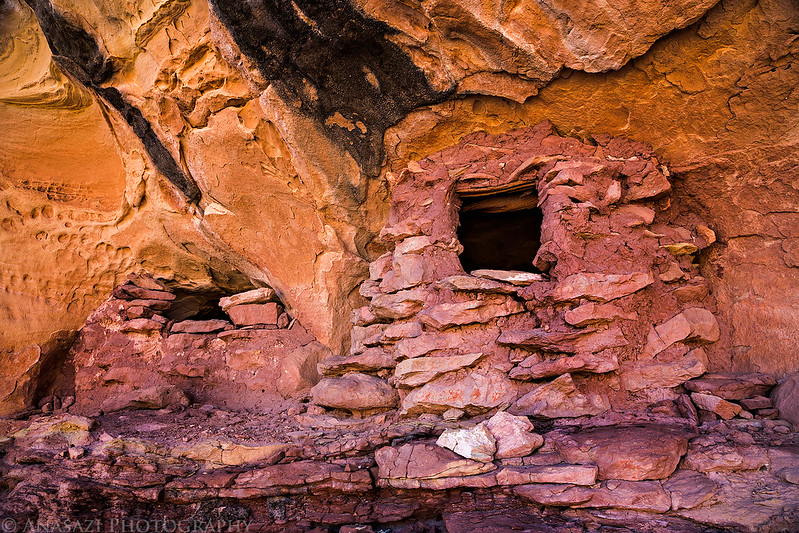 I really liked this doorway built into the opening of a little arch. 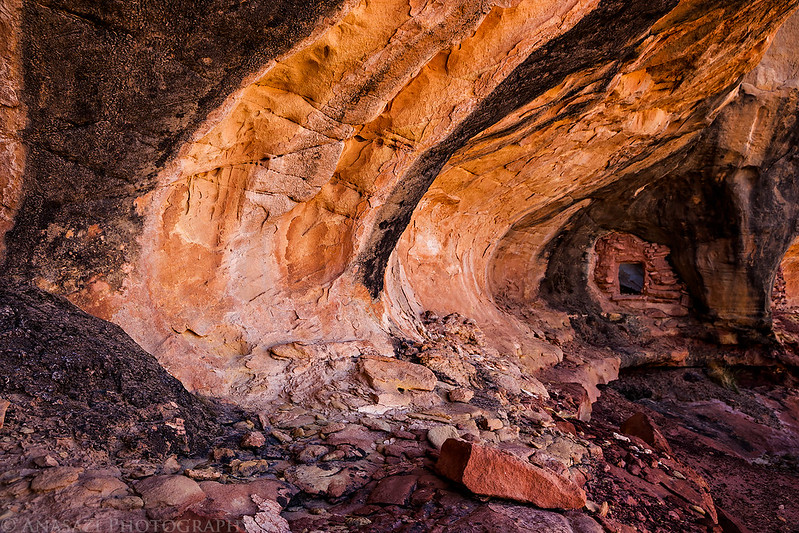 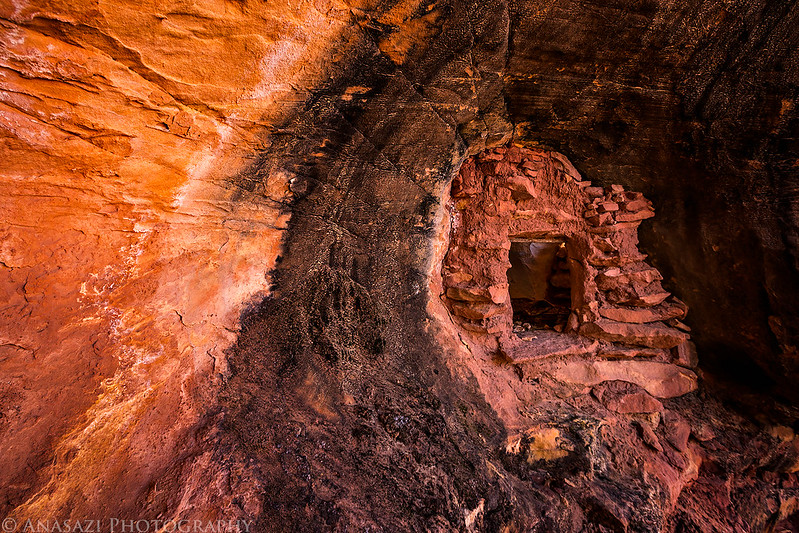 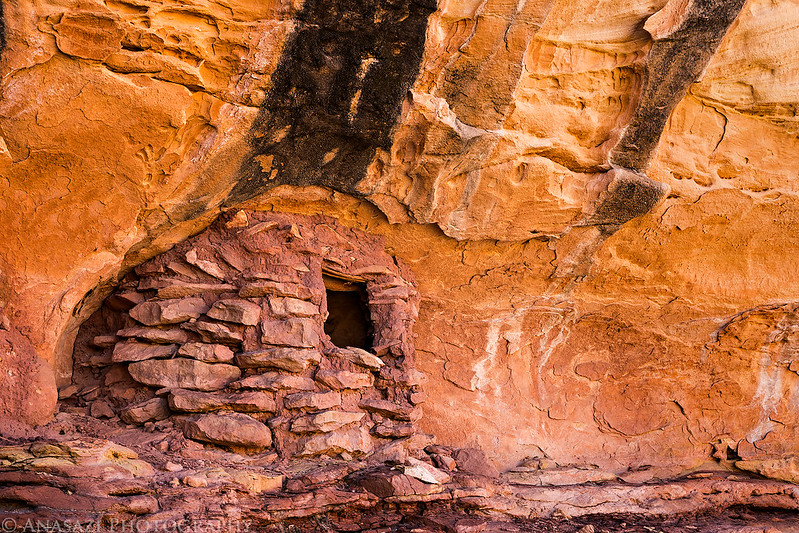 Looking down on Davis Canyon from above. 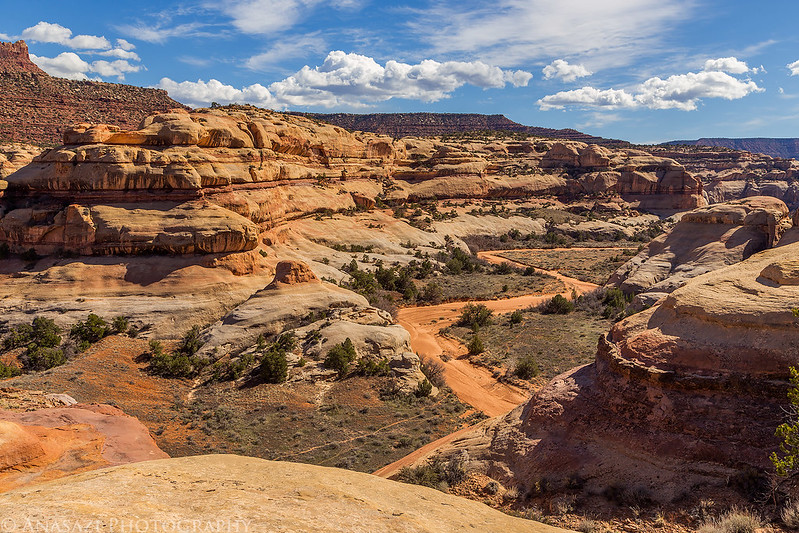 Diane crosses a narrow bridge of sandstone as we explored the area. 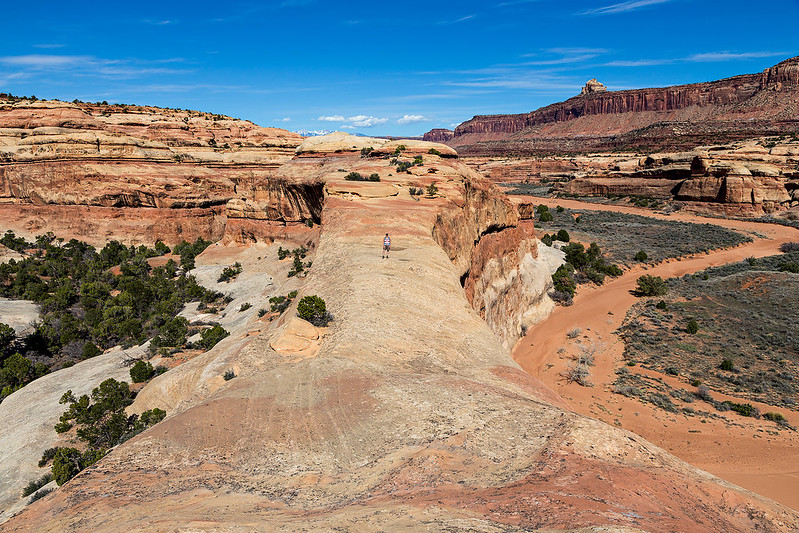 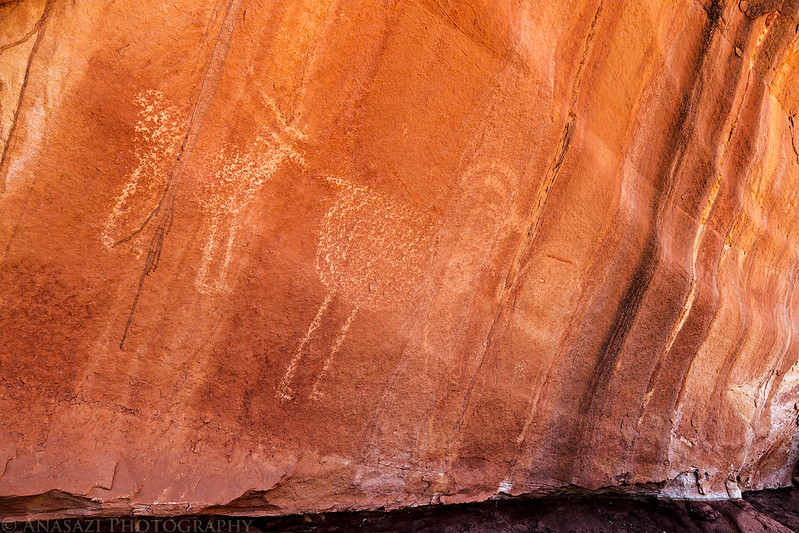 A tiny granary near the Five Faces. 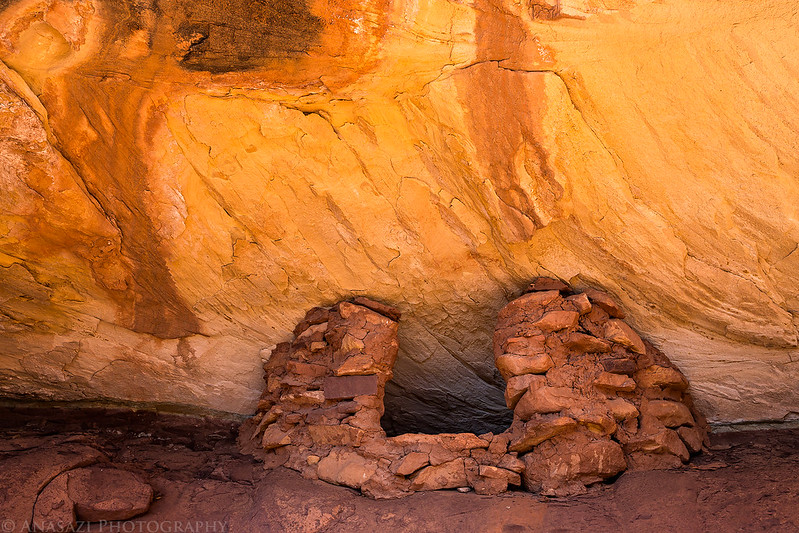 While searching a cliff face for rock art I found this narrow slot that was fun to climb through. 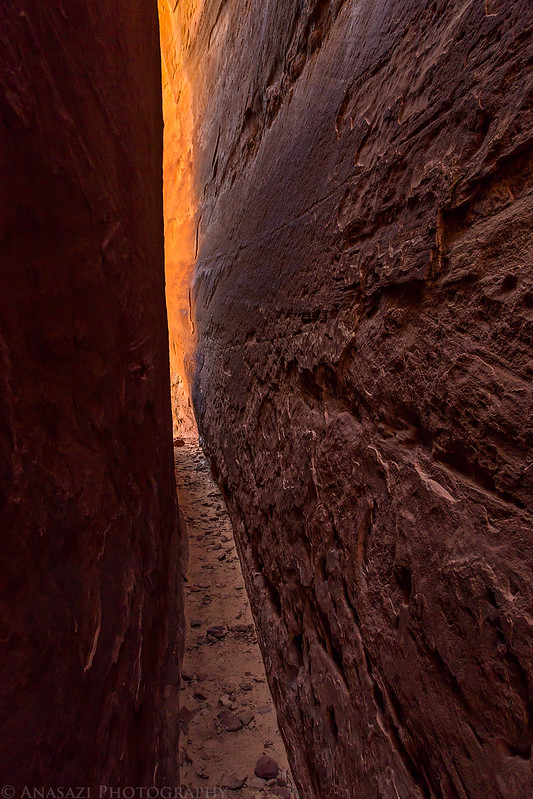 Earlier in the day after setting up camp we had gone off in search of a ruin located under an arch that I had heard of from a friend a few years back. I had searched for it before without success and thought I had a better idea where it was located this time. I was right on the location, but getting close to it proved to be a bit tricky for us. We easily found a way to get above the arch and see the ruin below it, but I wanted to get a better view from underneath. We found the route that would lead us below the arch, but unfortunately it required climbing skills that neither of us possess, so we were not able to get a view from below.

This was the climb that prevented us from getting below the arch for a better view of the ruin. The log was about as tall as I am and the slickrock was smooth with nothing to hold onto. There was no way we were getting up there! 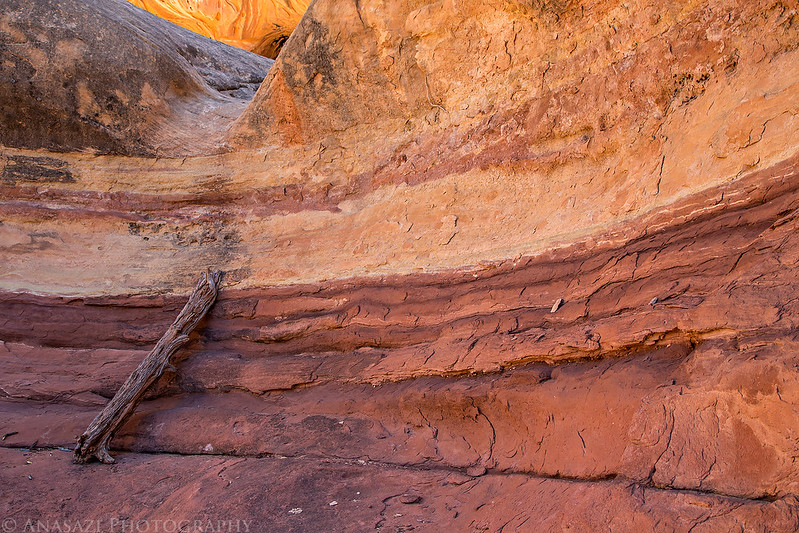 Later in the evening I returned to the top of the arch for a few photos in better light. Looking down on the arch from above. 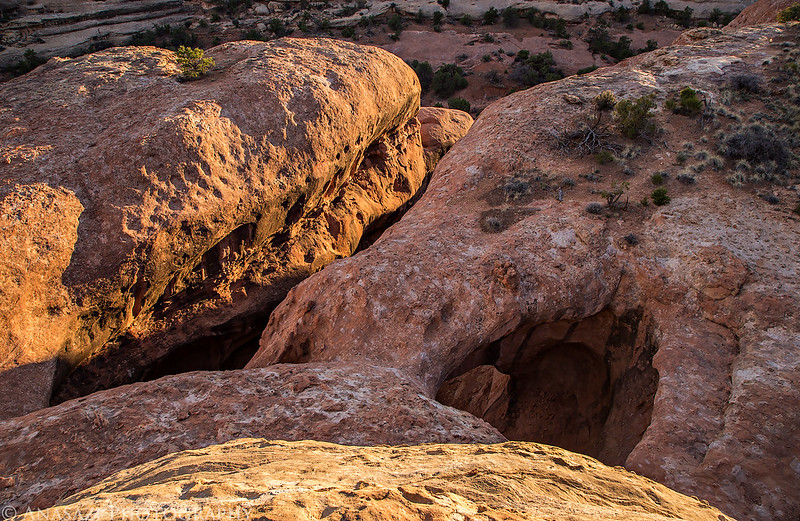 This is the best photo I was able to get of the tower under the arch from the rim above. It’s a very cool structure and is built on an inaccessible overhang under the arch. This structure would have required a large ladder to reach from above or below. I found it interesting that many of the ruins we spotted in this section of Davis Canyon appeared to be very inaccessible without the use of some sort of ladder. It all seemed very defensive to me. 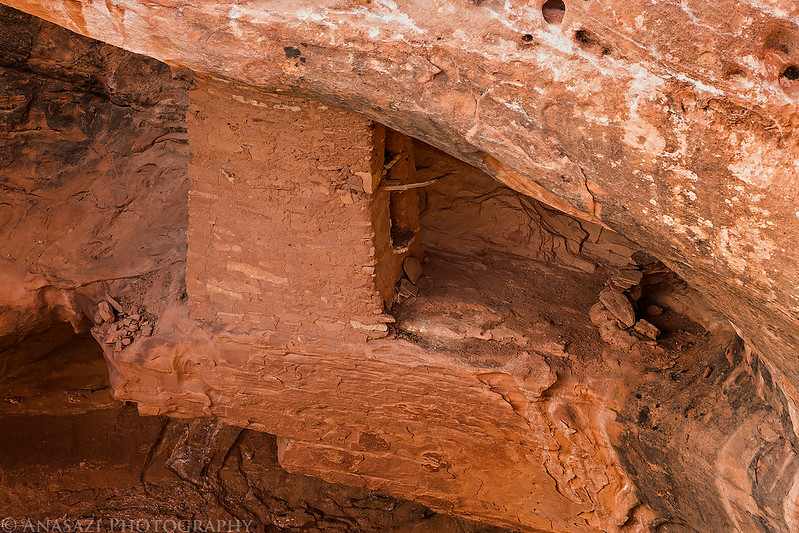 This is a view through the arch and the back side of the tower. 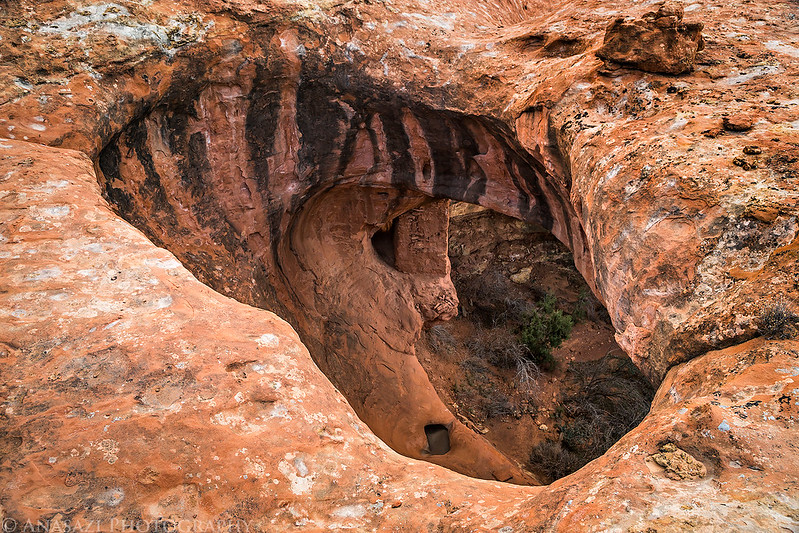 My shadow on the sandstone as the sun begins to set behind me. 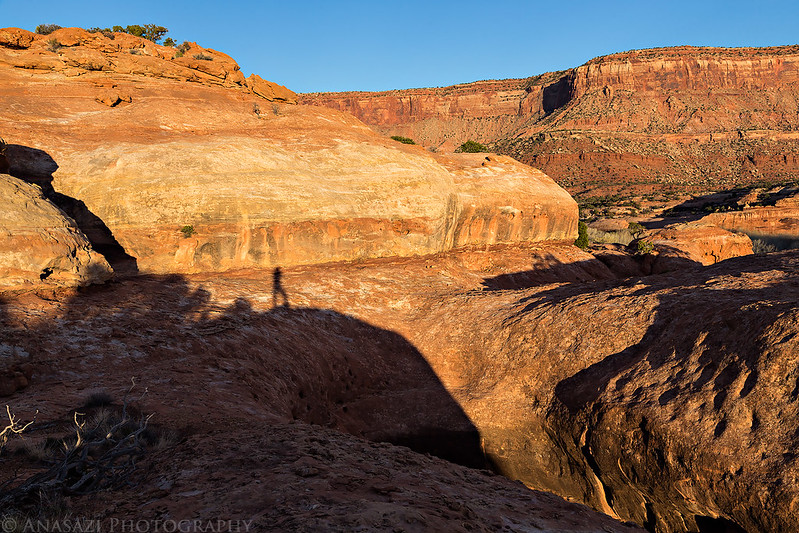 Exploring the area above camp before sunset. 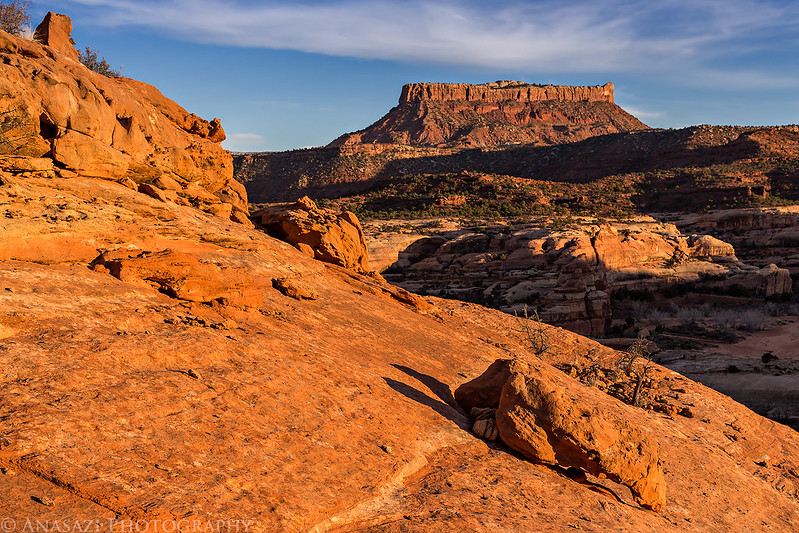 South Six-Shooter Peak in the distance.

A nice view over Indian Creek Canyon towards the La Sal Mountains. 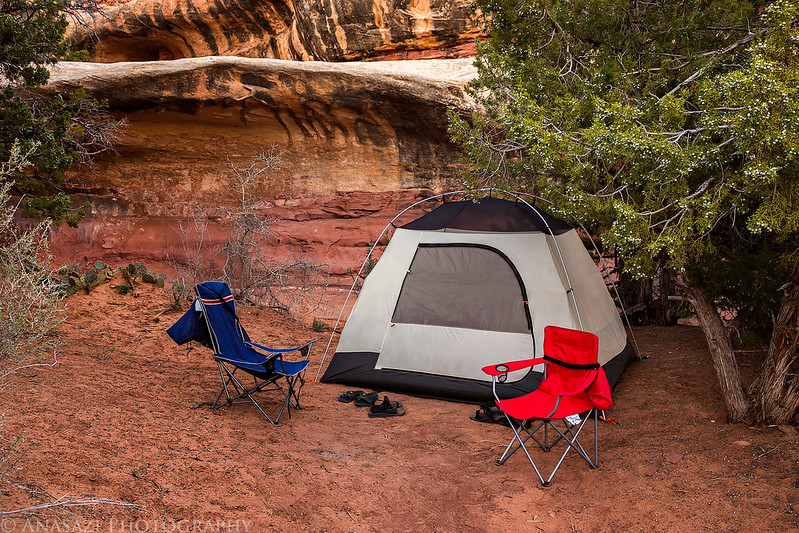 The weather this weekend was perfect for hiking and camping. It was in the low 70’s during the day and didn’t get too cold at night. When we got out of the tent at sunrise, my Jeep said it was 38 degrees out, but it really didn’t feel that cool and warmed up quickly. We packed up camp and had a little breakfast before driving out of Davis Canyon. Before heading back home we hiked to the White Bird Shelter for a few photos of the pictographs found there. The last time I was here I was unable to get many decent photos because the panel was partly in direct sunlight and partly in shade and I was hoping to get some better shots this time. Unfortunately, I had the same issue this time, but one cloud blocked the sun for a few minutes so I could get a couple of decent photos. 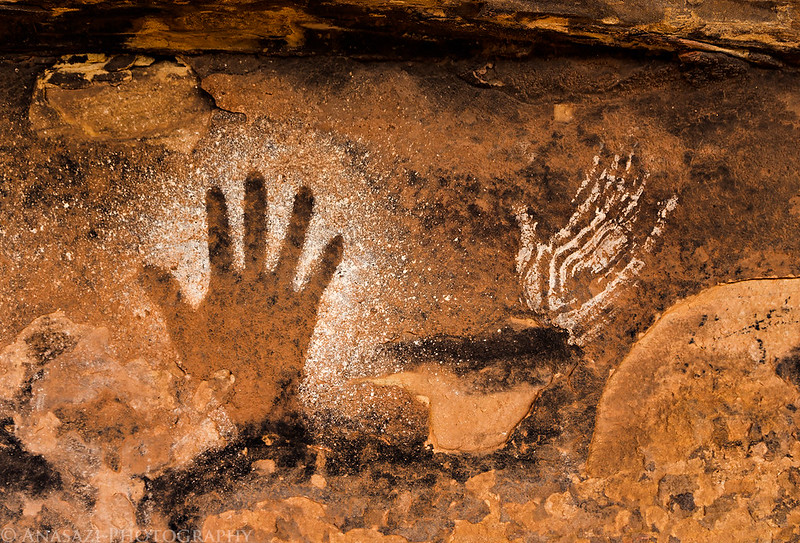 A red anthropomorph with many handprints next to it. 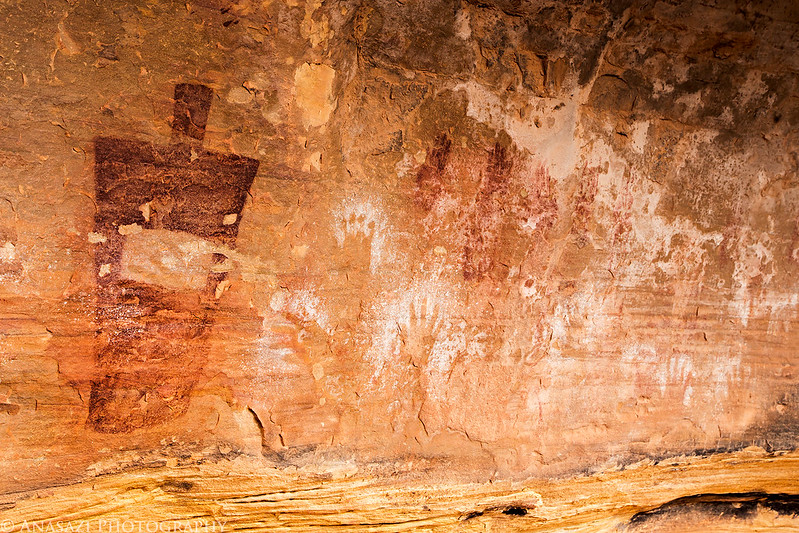 Some nice Barrier Canyon Style pictographs on the right side of the shelter. 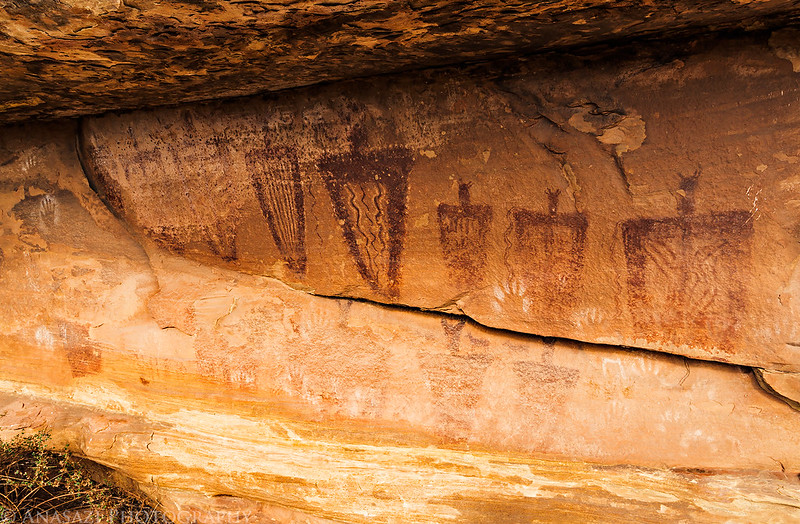 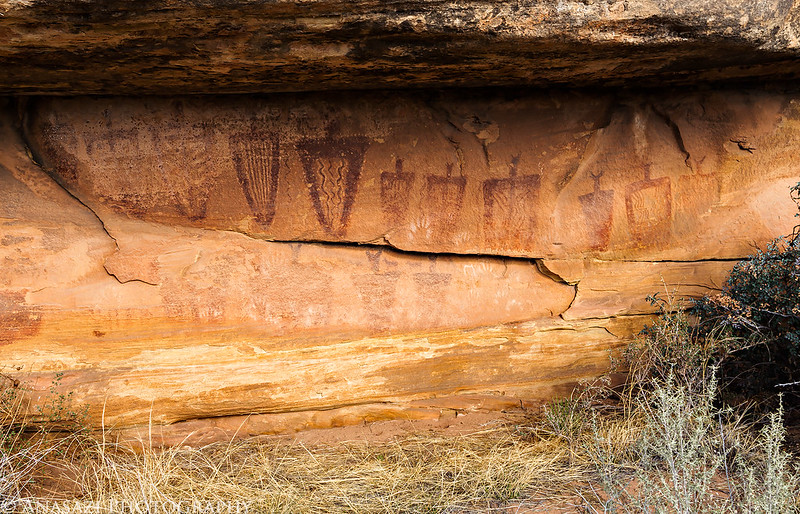 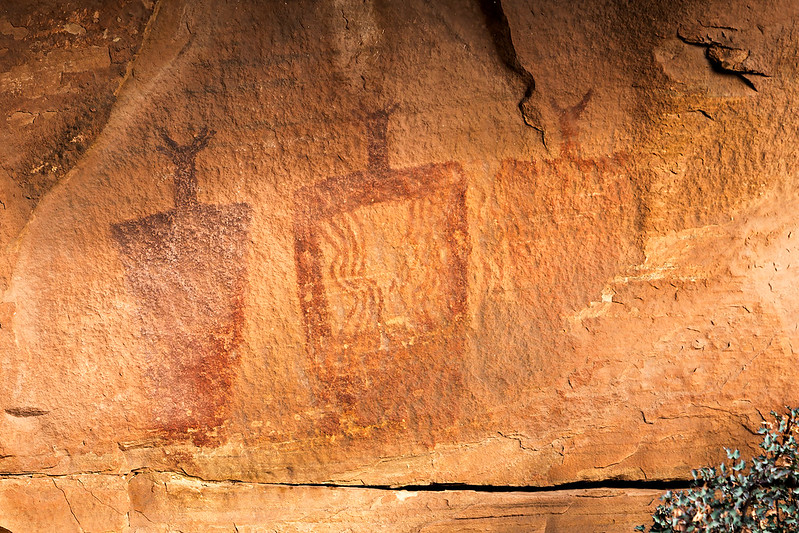