Even though I haven’t spent very much time in Zion National Park, I have always wanted to visit the park during the fall season at the beginning of November. Earlier this year I decided to finally make that trip happen. Diane and I took the Monday before Veteran’s Day off from work so we could make it a nice long 4-day weekend and we booked a hotel room in Springdale so we wouldn’t be camping this time.

We left home early on Saturday morning and drove across the state of Utah to reach Springdale just outside the entrance to Zion. The little town was packed with people and there were cars parked everywhere in town. I knew the shuttle buses were still running on the weekends in November, but I really didn’t think the park would be quite as busy this time of the year. My last and only visit to Zion was in March a few years ago when they weren’t running the shuttles and there weren’t many people there. We found a place to park in town and then walked into the park so that we could pick up our permits to The Subway for the following day at the Wilderness Desk.

Since I really didn’t want to deal with the shuttle buses in the main canyon, we took the Mount Carmel Highway through the east side of the park hoping to avoid people. Unfortunately, the road was packed with cars and many of the pullouts along the way were full, too. I wanted to hike into Petroglyph Canyon this afternoon and luckily we were able to find a parking spot near the trailhead. After parking we started the short hike to the petroglyph panel which we easily found. We didn’t want to deal with anymore traffic or people so we decided to continue exploring and hiking into the slickrock area above the petroglyphs and climbed up to a saddle above. 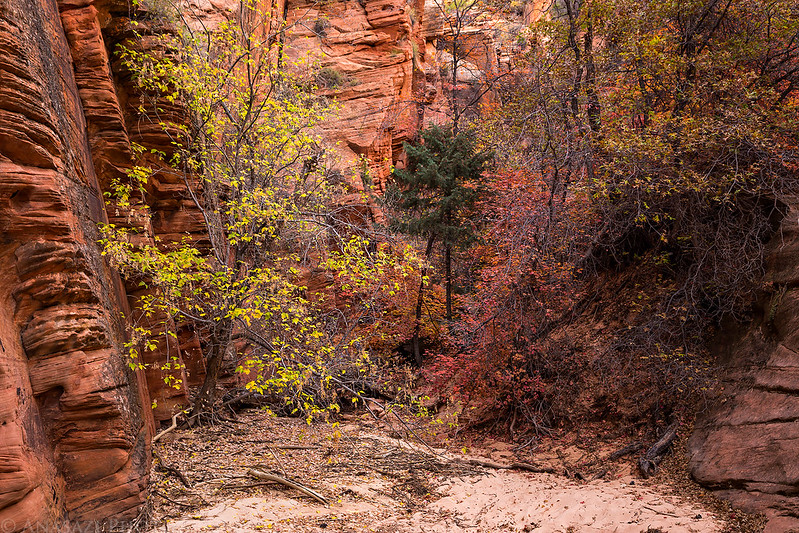 There were a few nice petroglyphs here. 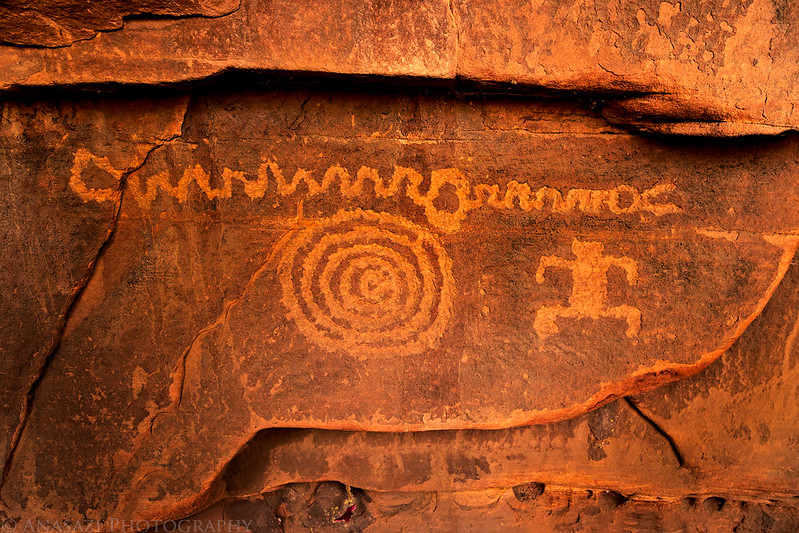 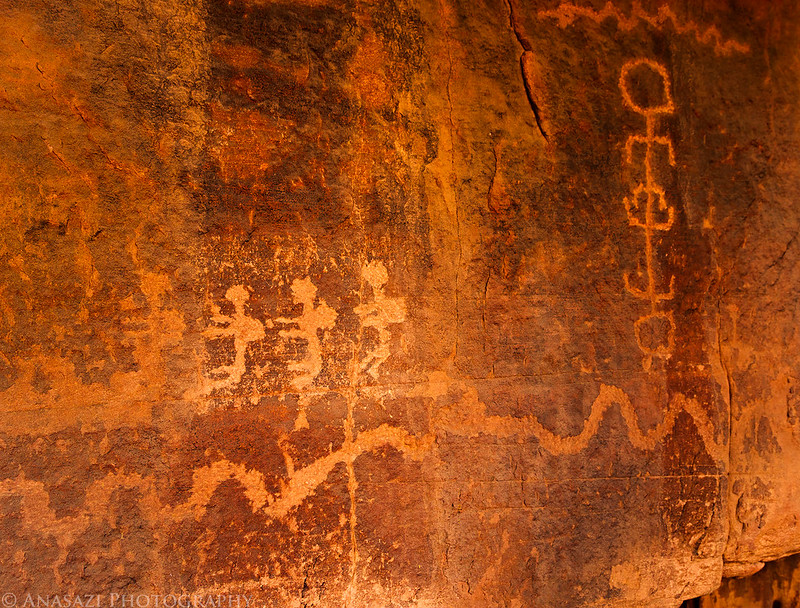 Hiking the sandstone area above the petroglyphs. 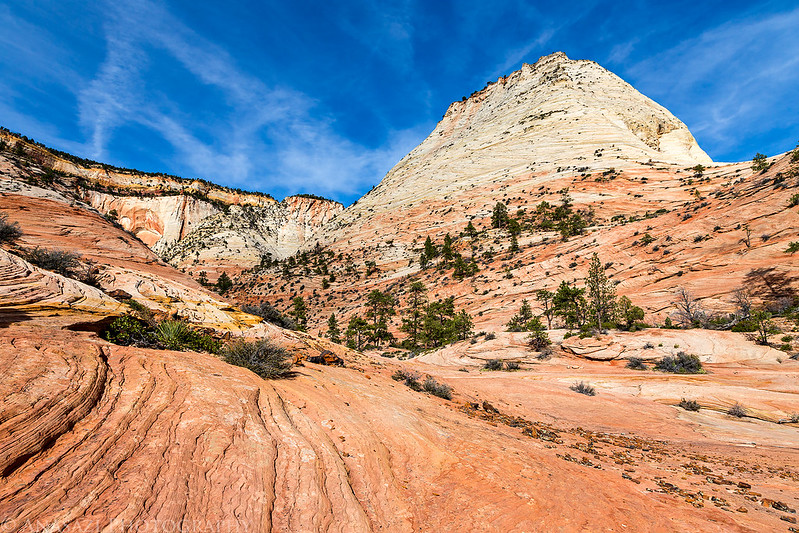 After exploring the area around Petroglyph Canyon and returning to our vehicle we noticed that the amount of traffic on the road had thinned a bit, so we stopped at the famous small tree that is growing out of the top of a sandstone dome and hung out there for a while as the sun sunk lowing in the sky. I’m actually surprised that no one else stopped by while we were there.

I had Diane climb up onto this rock to give the photo a little scale. 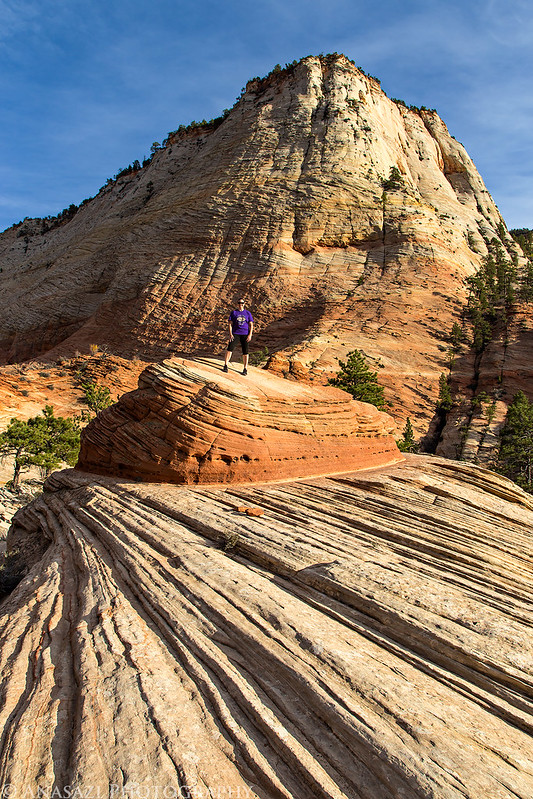 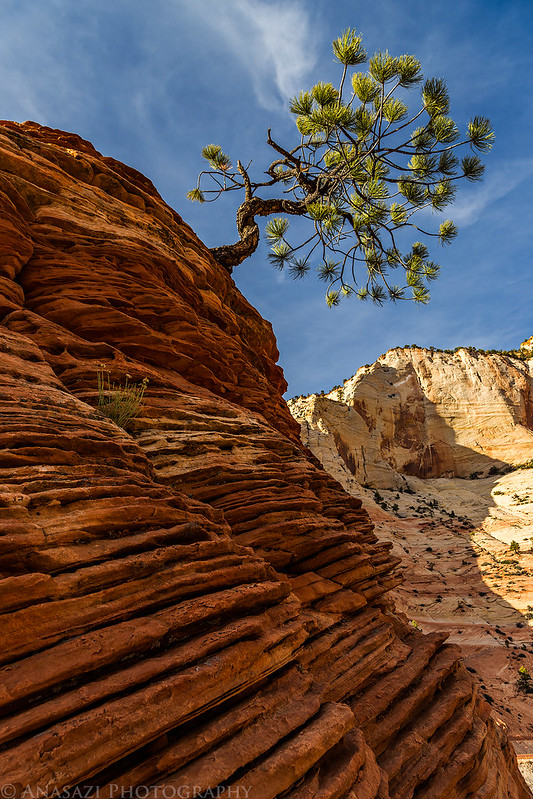 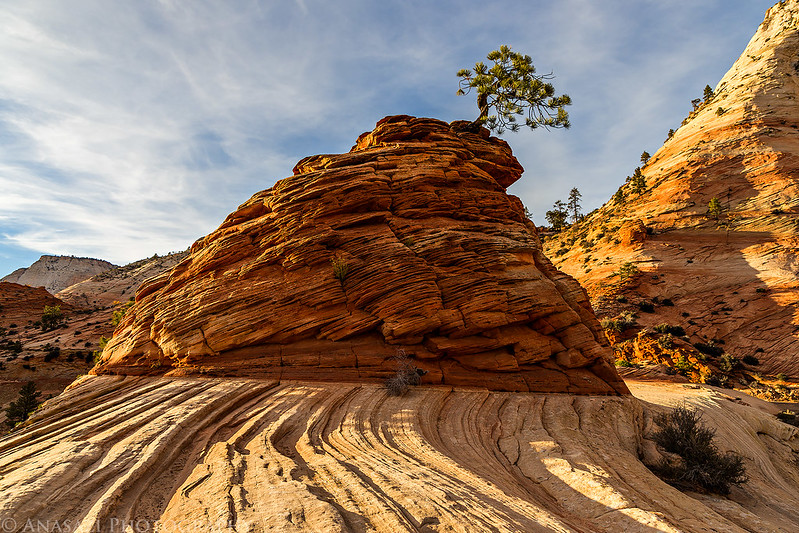 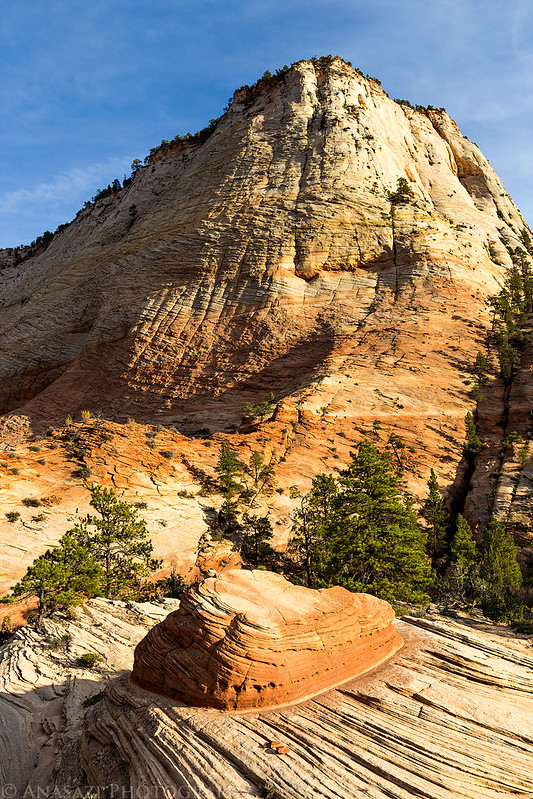 We started to drive back to Springdale shortly before sunset so we could check into our hotel, but we were stopped at the tunnel waiting for a large RV to get through. Instead of waiting in traffic we found a place to park and hiked the Canyon Overlook trail instead.

A view from the Canyon Overlook. 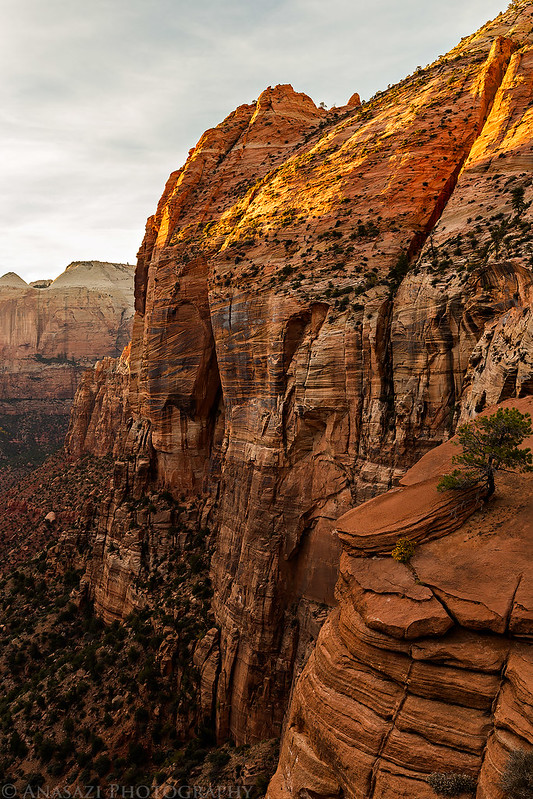 Nice warm light on The East Temple above the trail. 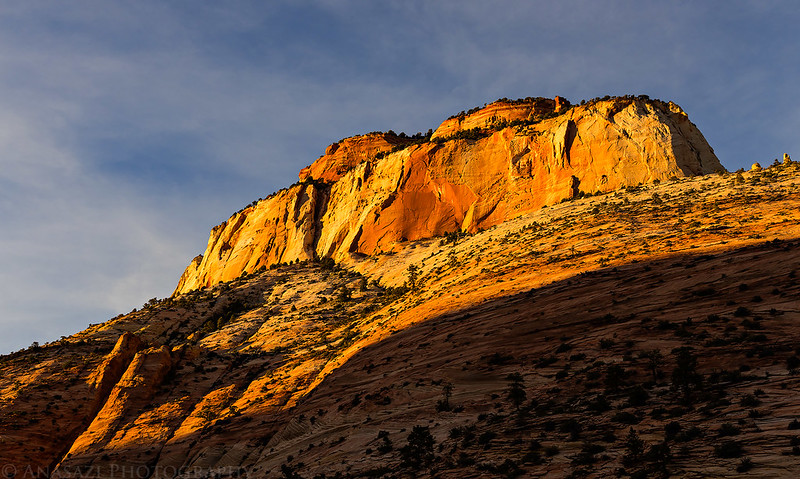 After the short hike, we drove down through the tunnel and caught the end of a nice sunset along the road near the park’s entrance. I managed to find a spot to pull over for a few quick shots. 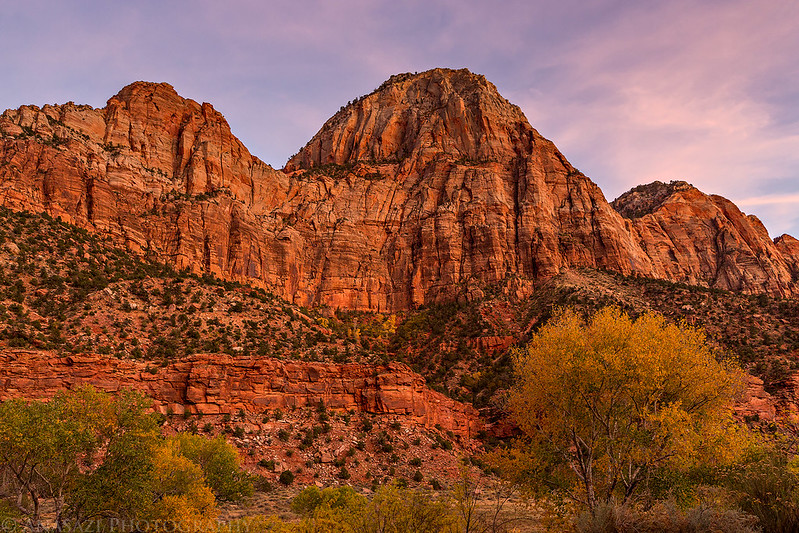 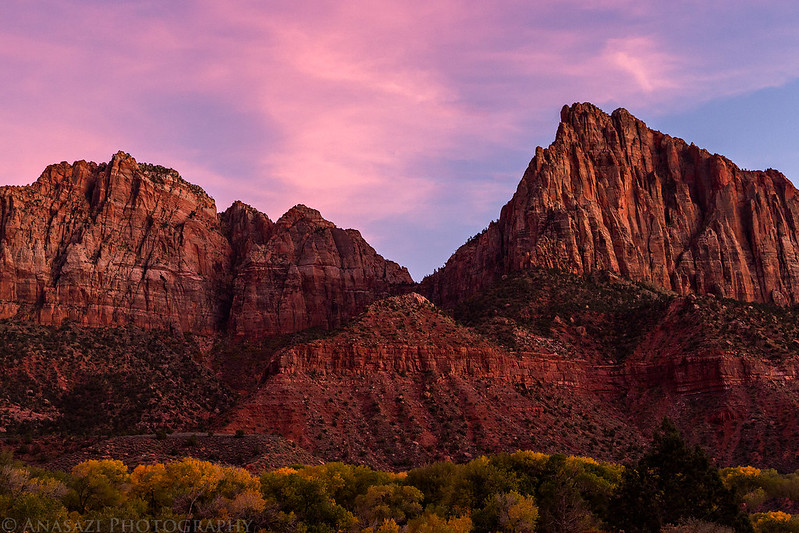 After checking into our hotel and having some pizza for dinner we returned to the park in the dark hoping to avoid people and so we could watch the almost full moon rise and light up the Towers of the Virgin and the Court of the Patriarchs.

The Towers of the Virgin in moonlight. 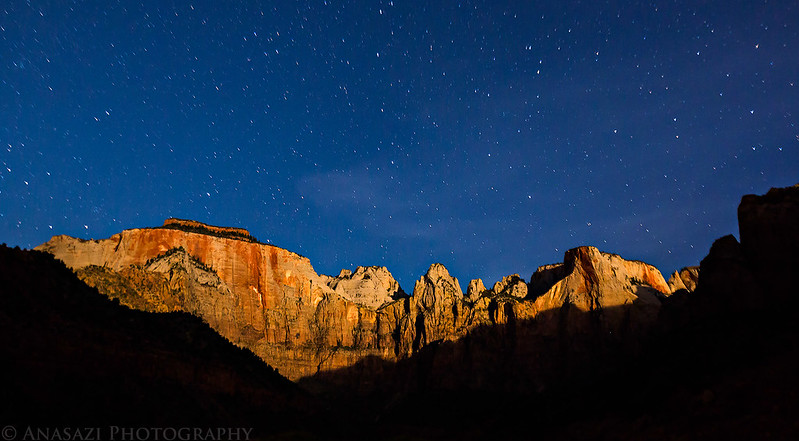 The moon lights up the Court of the Patriarchs over the Virgin River. It’s hard to tell in this small photo, but there is light from a headlamp near the top of the peak in the middle. We watched the light move as a few climbers descended down from the top in the dark. 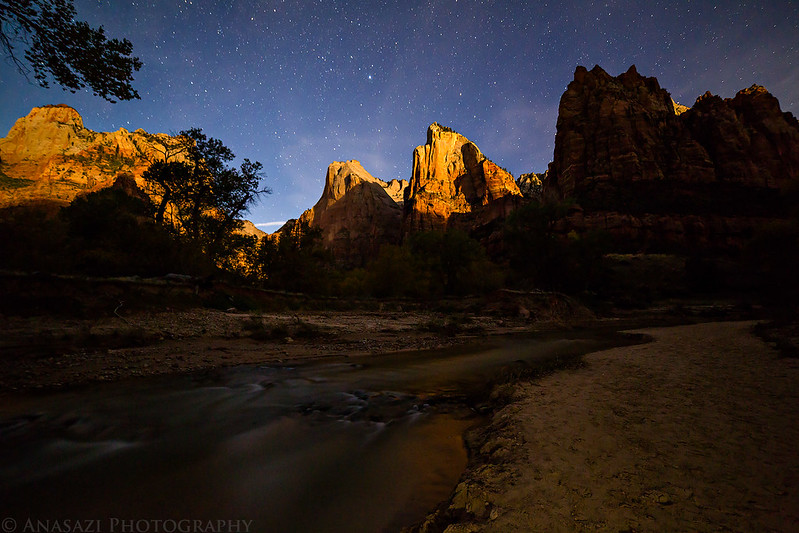 After returning to our hotel we went to bed early so we could get an early start hiking into the Left Fork of North Creek to The Subway the following morning.