Deep, Steep and Narrow. That’s how the National Park Service describes the Black Canyon of the Gunnison, and it’s pretty accurate. The Black Canyon is comprised of some of the steepest cliffs, oldest rock, and craggiest spires in North America.

I’ve wanted to hike down into the Black Canyon of the Gunnison for quite a while now and thought I would try Red Rock Canyon, the easiest route, for my first time. This trail is about 3.5 miles in length and only drops 1330 feet to the river. Compared to the other routes down to the Gunnison, this one is definitely the least steep. There is a lottery each year to get permits to hike this trail because of an agreement with a property owner whose land the first part of the trail crosses. They only allow eight people per day or three groups of people with a limit of 100 people per month. Hiking is only allowed from May 25th through October 5th, so it’s a pretty short season, too. I tried to get a permit to hike Red Rock Canyon in the lottery last year, but was unsuccessful. This year I was lucky enough to get a permit for the first weekend in June and invited Diane to take her very first backpacking trip here since it is pretty close to home. I hadn’t been able to find much info about this hike so I wasn’t exactly sure what to expect. That’s part of the reason I wanted to check out this canyon. I wanted to experience it for myself.

While we were down in the Black Canyon we were also treated to another event that hasn’t happened for almost 20 years. Because of the good snowpack in the mountains this year, it’s been a pretty big water year. During our trip, the Morrow Point Dam upstream in the Curecanti National Recreation Area was releasing water from all four of it’s spillway ports and the Crystal Dam at East Portal was using it’s spillway, too. This caused the Gunnison River to flow at over 9,000cfs through the Black Canyon. I looked up the water level history on the USGS website and found that the river had not been over 9,000cfs since July of 1995! It was very cool to see the river running so high and fast through the canyon, but I would also like to return at lower water levels sometime so we can explore more along the river.

We left home early Saturday morning and made our way through Delta and Montrose before driving through the ranchland of Bostwick Park to the dead end of the road at private property. We parked in the small parking area just outside the gate, put on our packs, and started hiking down the road through the private property. Thanks to an agreement with the property owners, the park allows a limited amount of hikers to pass through the property in order to reach red Rock Canyon. After hiking a little over a mile on the road, we reached the park boundary where the road turned into a faint trail along the creek and entered Red Rock Canyon which drops about 1330 feet down to the Gunnison River at the bottom of the Black Canyon.

The start of the hike across the private property. 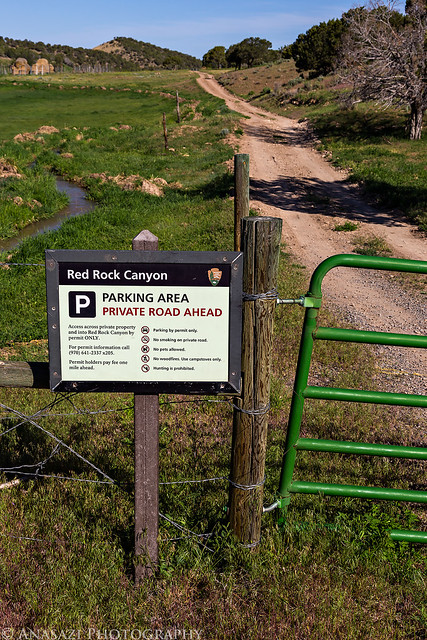 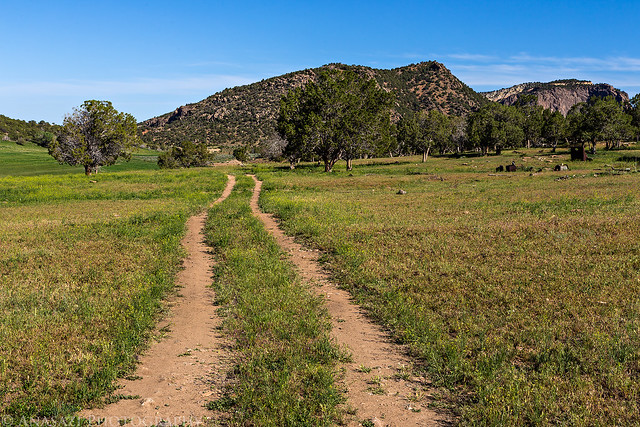 After a little over a mile we finally reached the park boundary. Diane poses with the sign before we start our descent into the canyon. 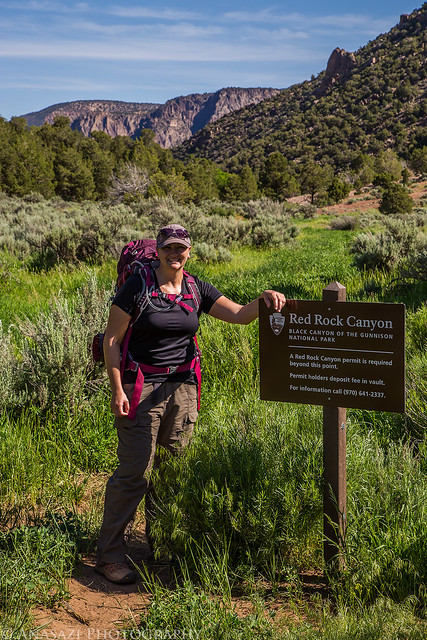 Looking down Red Rock Canyon as the trail starts to descend. 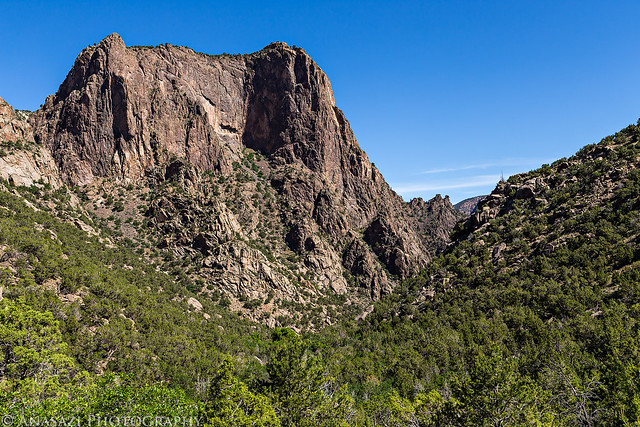 The trail started out pretty good, but it became hard to follow in some places, and it seemed to disappear completely at the creek near a small waterfall after about a mile from the park boundary. We could not find where it went at this point, so we assumed that it might follow the creek. We followed the creek for a little bit which normally wouldn’t have been an issue, but there was so much poison ivy along it’s banks that it made travelling difficult. The banks of the creek were pretty steep at this point, and we couldn’t easily get out to try and find the trail again. After some slow progress we did eventually connect up with the trail again and managed to follow it the rest of the way to the river. Once we hiked over the last hill into the Black Canyon we could hear the loud roar of the Gunnison River. It actually wasn’t as loud as I was expecting it to be. We set up camp on the bench above the river (I’m guessing there are other campsites that were under water right now) and spent the afternoon exploring as much of the small area as we could.

A small waterfall along Red Rock Creek. This is the area we lost the trail… 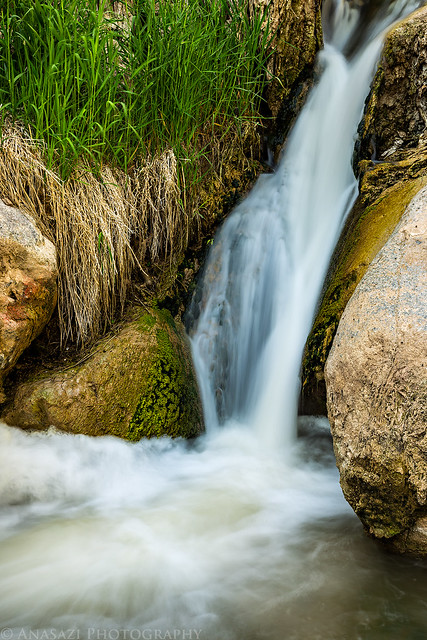 First view from the bottom of the Black Canyon. 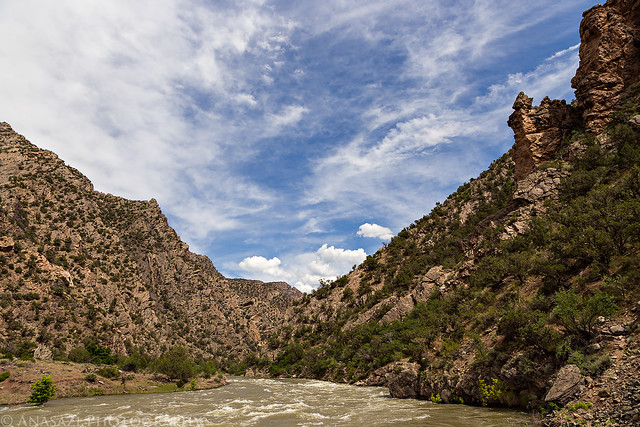 This was the first time using our Mountainsmith Celestial 2-person backpacking tent and it worked out nicely for us. There was plenty of room for the both of us inside and having two doors are nice. It was also simple and easy to setup. It’s not the lightest backpacking tent on the market, but it’s pretty light for the inexpensive price. The only complaint I have is that the two vestibules could stand to be a little bigger, but we didn’t need to try them out on this trip. 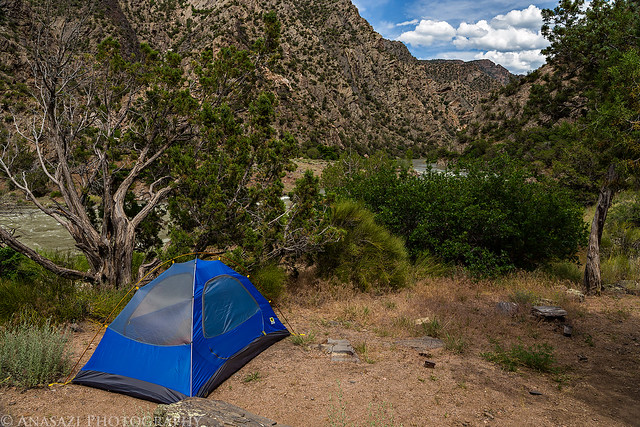 The river was moving pretty fast. You can see trees in the current that normally are not in the water. 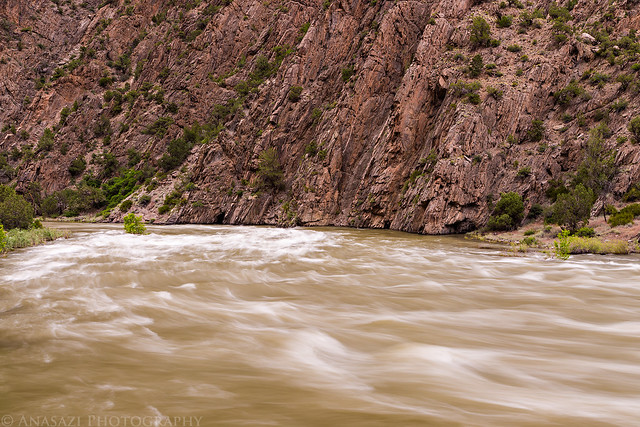 Here’s a short video clip I took of the river so you can see just how fast it was flowing, since it might not flow again like this for another 20+ years!

Nice clouds and a small moon above the canyon walls. 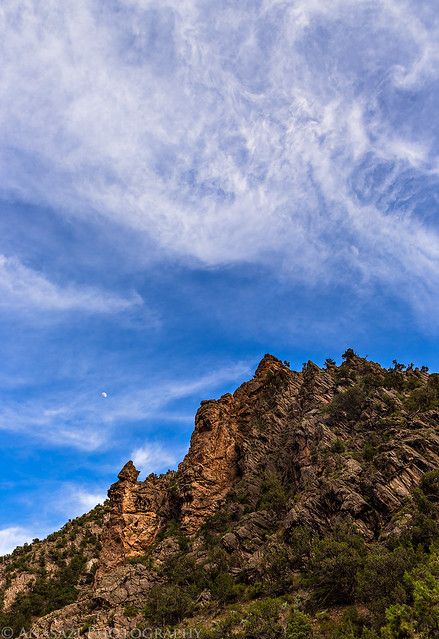 A small waterfall right behind our camp. 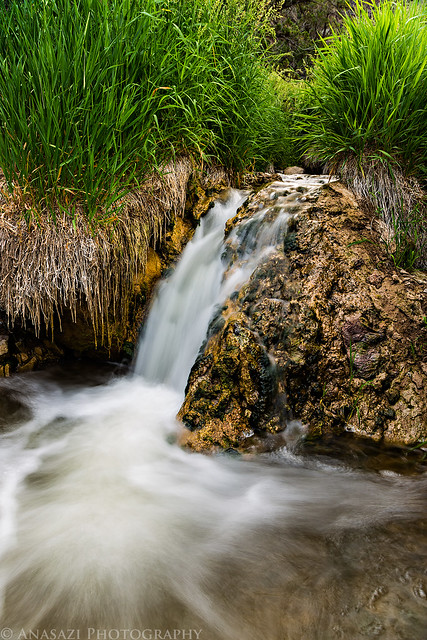 Raging river and a view up the canyon. 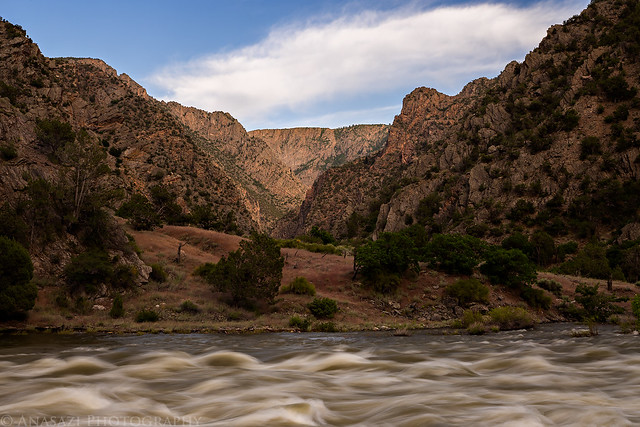 There was a beautiful sunset this evening. 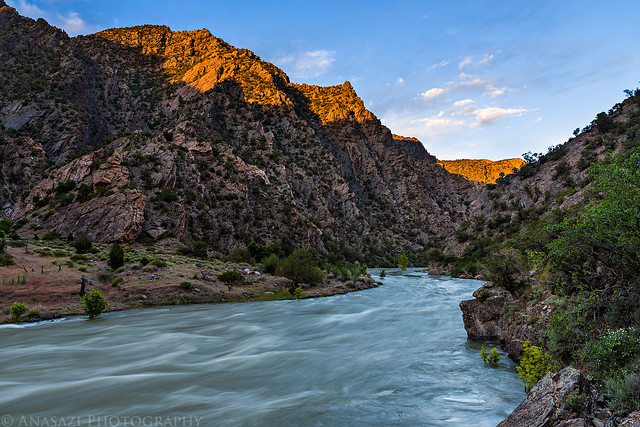 There was even a little pink in the sky. I like the subtle pink reflection on the river in the foreground. 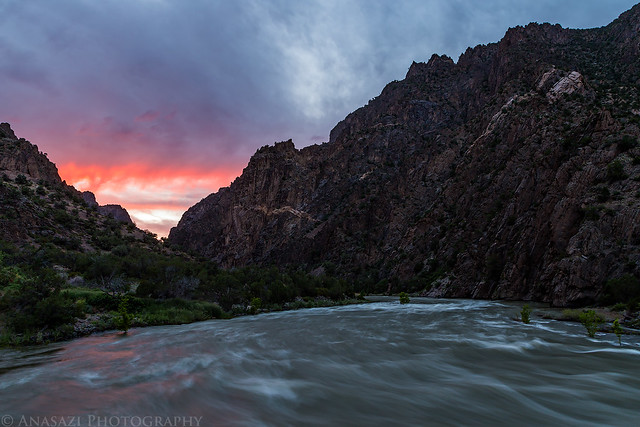 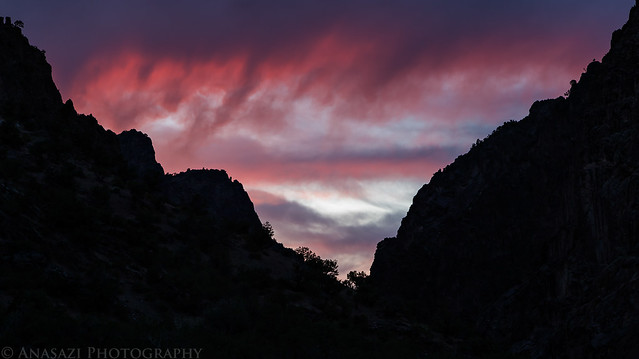 After the beautiful sunset we went to bed early and were put to sleep by the soothing roar of the river. We slept very well that night and it stayed pretty warm down in the canyon.

On Sunday morning I woke up for sunrise while Diane slept in. Unfortunately, we were in a bad location for sunrise and I didn’t get any decent photos. After breakfast we packed up camp and started our hike back out of the canyon. This time we managed to follow the trail the whole way back and found where we made our error on the way down. It made the hike quite a bit easier. There were also more clouds in the sky this morning which helped keep the sun off of us and kept us a little cooler as we climbed the 1330 feet back to the trailhead. We made it back to the trailhead in about 3 hours which included taking our time and stopping to photograph another waterfall along the trail.

Spotlight on the canyon above. 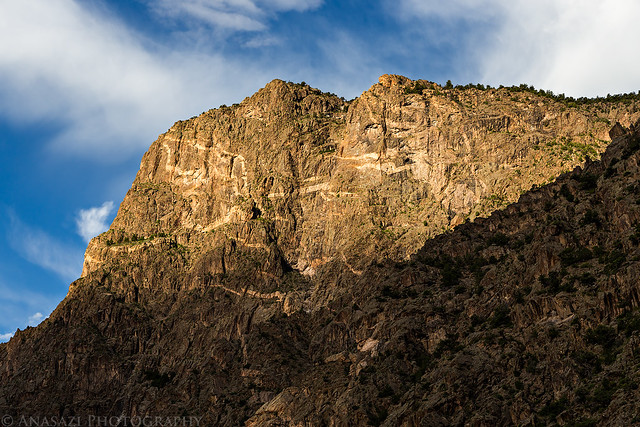 Early morning light strikes the other side of the Black Canyon. 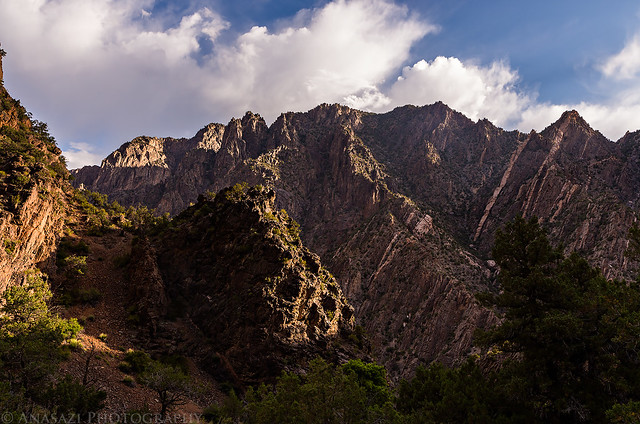 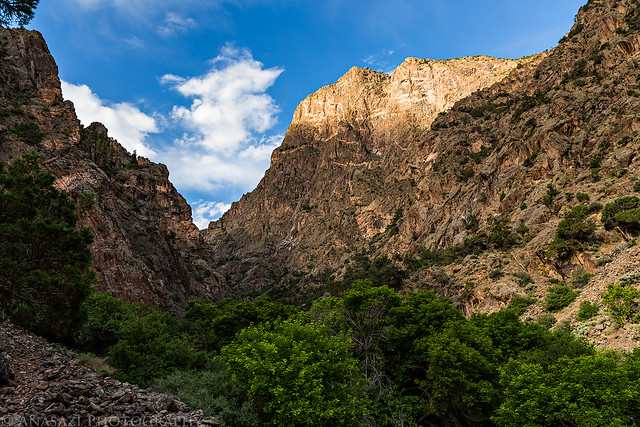 Here’s a good example of what the trail looked like throughout the hike. It could be pretty tough to follow in places and you had to keep your eye out for faint signs of it. 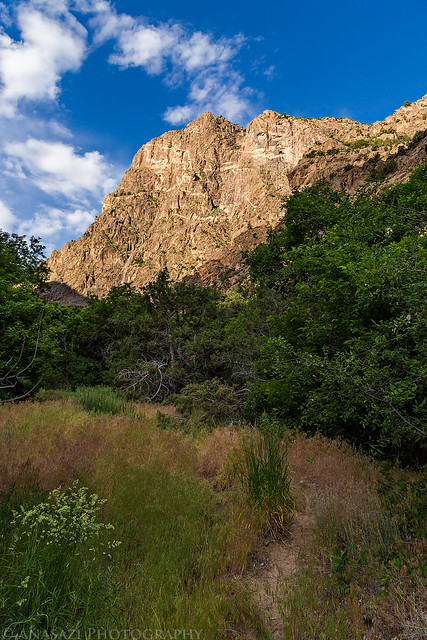 Looking back down Red Rock Canyon into the Black Canyon from along the trail. 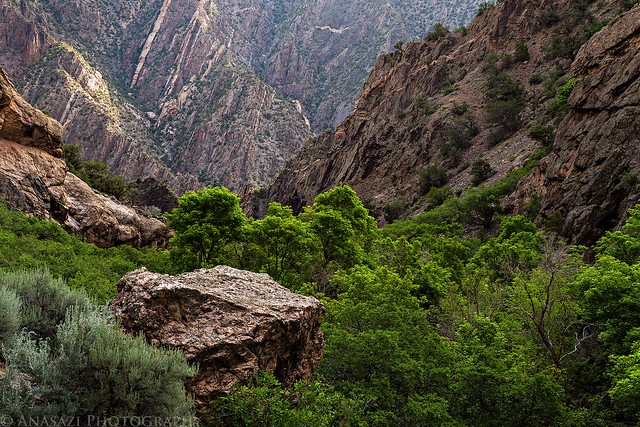 Another little waterfall we passed along the trail. We had missed this one the previous day when we lost the trail. 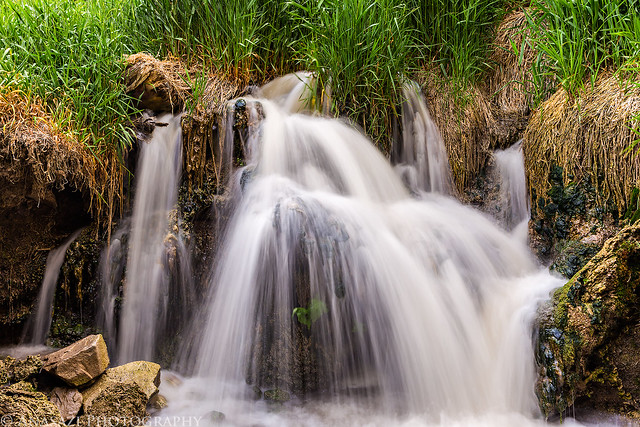 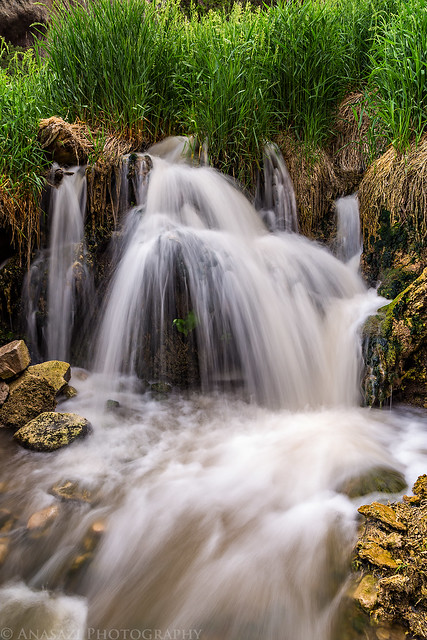 Diane patiently waits for me to take photos of the waterfall. 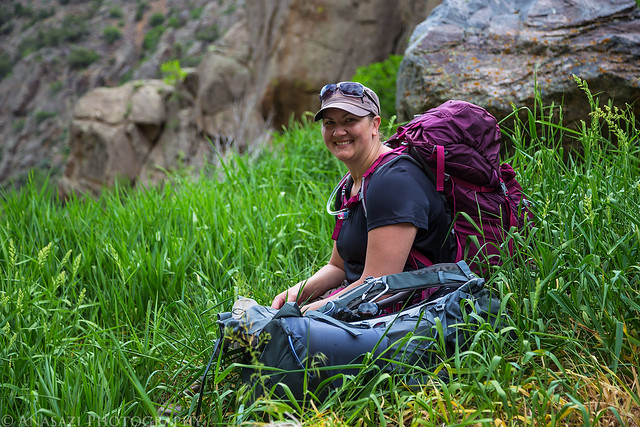 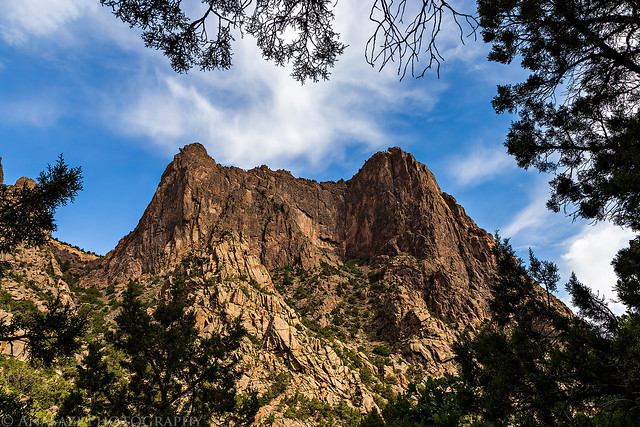 One last view down Red Rock Canyon before we reached the park boundary and finished the hike across private property. 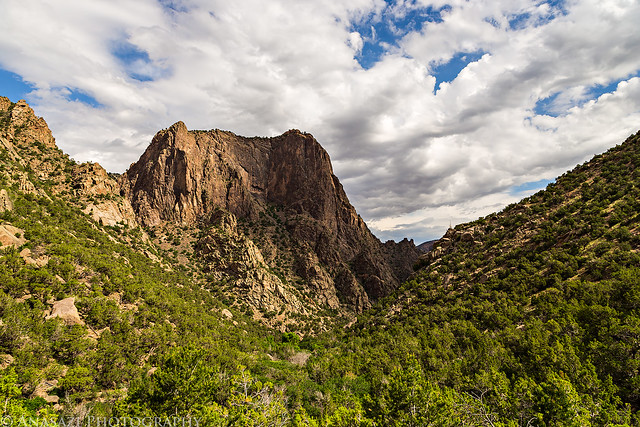 Since there is not a lot of information about this trail out there and it can be a little tricky to follow in places, I’m including a GPS track of our hike to help you find your way if you decide to give this hike a try. My GPS had a hard time keeping signal in a few places down in the canyon, so the track isn’t perfect, but it should help you find your way. Please, do not rely on this GPS track for navigation and make sure you have proper gear and navigation skills before attempting this hike.


Download a GPX track of our Red Rock Canyon Hike